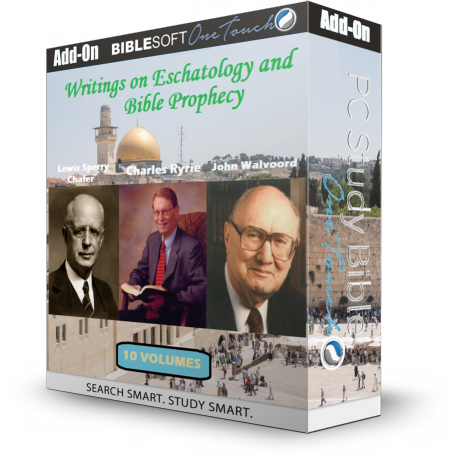 A collection of titles on Eschatology and Bible Prophecy, by three leading figures of Evangelical and Dispensational theology in the 20th century.

This collection features 10 titles by three leading figures of Evangelical and Dispensational theology in the 20th century. They represent the influential Dallas Theological Seminary, and each has published many books and articles.

Lewis Sperry Chafer (1871-1952) founded and served as the first president of Dallas Theological Seminary. Chafer and his mentor C.I. Scofield are credited for the spread of dispensationalism in America and throughout the world. Through the founding Dallas Theological Seminary and the Bibliotheca Sacra journal, Chafer has led the reformed faith movement and had a vital role in encouraging the works of next generation theologians Charles Ryrie and John Walvoord. In addition to his books on Dispensationalism and Bible prophecy, Chafer was a skilled theologian, and his Systematic Theology remains in use among Evangelicals today.

Charles Caldwell Ryrie (1925-2016) has been one of the more influential and widely-published Evangeical commentators and theologians of the 20th century. He served as professor of systematic theology and dean of doctoral studies at Dallas Theological Seminary and as president and professor of Cairn University. He also taught at the Tyndale Theological Seminary. With a pastor's heart and academic's precision in rightly handling the Scriptures, he has produced a living legacy of works that are widely read on the academic and popular levels. Of his many published works, one must note his Basic Theology, and the popular Ryrie Study Bible.

John F. Walvoord (1910-2002) served as president of Dallas Theological Seminary from 1952 to 1986. A pastor, theologian, and Biblical commentator, Walvoord has been the author of over 30 books, often dealing with the subjects of eschatology and prophecy. He was also co-editor of popular The Bible Knowledge Commentary.

The titles in this collection are:

NOTE: These titles are also part of the larger Eschatology and Bible Prophecy Collection.

You may also purchase these in separate collections of works by L. S. Chafer, Ryrie (with the expanded collection), and Ryrie & Walvoord.

To access these titles in PC Study Bible, you will find them listed by author ("Works of Charles Ryrie", etc) under the Books menu, and also the relevant titles will be listed separately under the Commentary menu (or the sub-category "Additional Commentary Material").