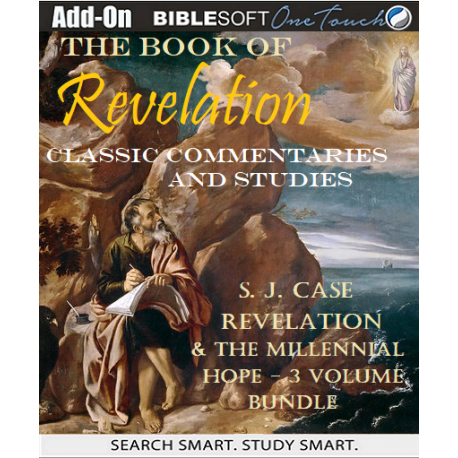 Revelation and the Millennial Hope bundle

S. J. Case's distinguished historical-critical commentary on Revelation, along with a study on early Christian eschatology (The Millennial Hope); also included is the author's Outline Bible Study on the book of Revelation.

This is a combination of two eschatological works by Shirley Jackson Case (1872-1947), a distinguished early-20th century scholar and professor of Early Church History and New Testament Interpretation at the University of Chicago. A Baptist scholar, his works on the New Testament adopt a moderate critical approach, focusing especially on the historical background and setting. This demonstrated in his Commentary on the book of Revelation—The Revelation of John: A Historical Interpretation (1919). Here "historical" does not mean the church-historical approach to interpreting the the prophecies, but rather a historical-critical analysis of the book. By focusing on the original first-century setting of Revelation, as the book would have been understood by the author and readers at the time, Case naturally avoids the sort of speculation regarding future/modern-day fulfilment of the visions that characterizes many commentaries.

As a companion to this Commentary, we also include Case's short Outline Bible Study on Revelation, designed as an introduction to the book for the general reader and student. It is divided into a series of studies, each with study questions for review. Our Question/Answer functionality in PC Study Bible allows the user to type in responses to the questions, which then become a dynamic, editable part of the electronic text.

A somewhat different work by the author, but written in a similar vein as his Commentary on Revelation is The Millennial Hope (1918), a more general study on early Christian eschatology, especially regarding the idea of the Millennium, examining it from the standpoint of the New Testament (and its Jewish antecedents), early Christianity, and throughout Church history, as well as its relevance to Christians in the 20th century.

Note: This Commentary on Revelation and Outline Bible Study are also included in our Book of Revelation: Classic Commentaries and Studies Collection 2 and Deluxe 34-volume Collection; while The Millennial Hope is part of the Classic Studies on Eschatology and our Eschatology and Bible Prophecy Study Collection.