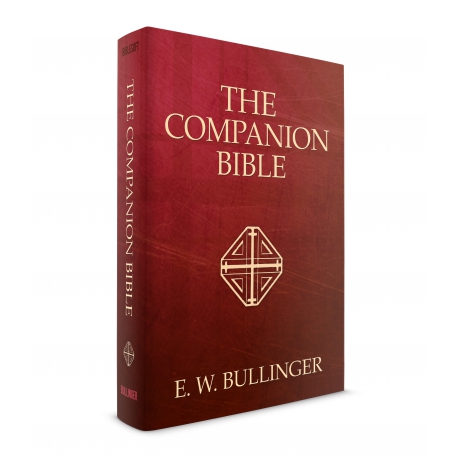 Buy Together and Save! Save when you purchase this title as part of the Bullinger Bundle. Available here.

The Companion Bible Notes, by E. W. Bullinger, is a very popular study aid with an avid following. Used by many since the early 1900’s and based on the KJV, it has excellent textual study notes and detailed outlines on numerous thematic studies. The work also includes 198 different appendices of Hebrew and Greek words and their use, additional studies on biblical usage of figures of speech, study charts, lists of proper names, calendars, timelines, and much more.

Many of the Old Testament notes contain references to a significant work by Christian David Ginsburgon the Massorah (small writings in the margins of the Hebrew texts).  Bullinger is reportedly the only Christian that Ginzberg allowed to help him with his collection of the Masoretic Notes or even to see them.

Bullinger’s work is widely read in Dispensationalist circles and also by others interested in his unique and sometimes controversial studies on subjects often avoided by other scholars.

The outlines and appendices are regarded by many as the best parts of the Companion Bible, and are extensive. Bullinger produced an expanded, compound outline set for each book and connected it to notes throughout.  Biblesoft has enhanced the accessibility of these outlines by producing a simplified and streamlined outline at the beginning of each book in order to help you get the most from them.

There are also a significant number of Word Studies - especially in the New Testament. Notes with Hebrew and Greek analysis also give alternate translations of critical passages and list other relevant texts.

Note: This title interfaces with the Bible versions you already have installed in PC Study Bible. It is not a standalone Bible. (This work was based on the KJV.) 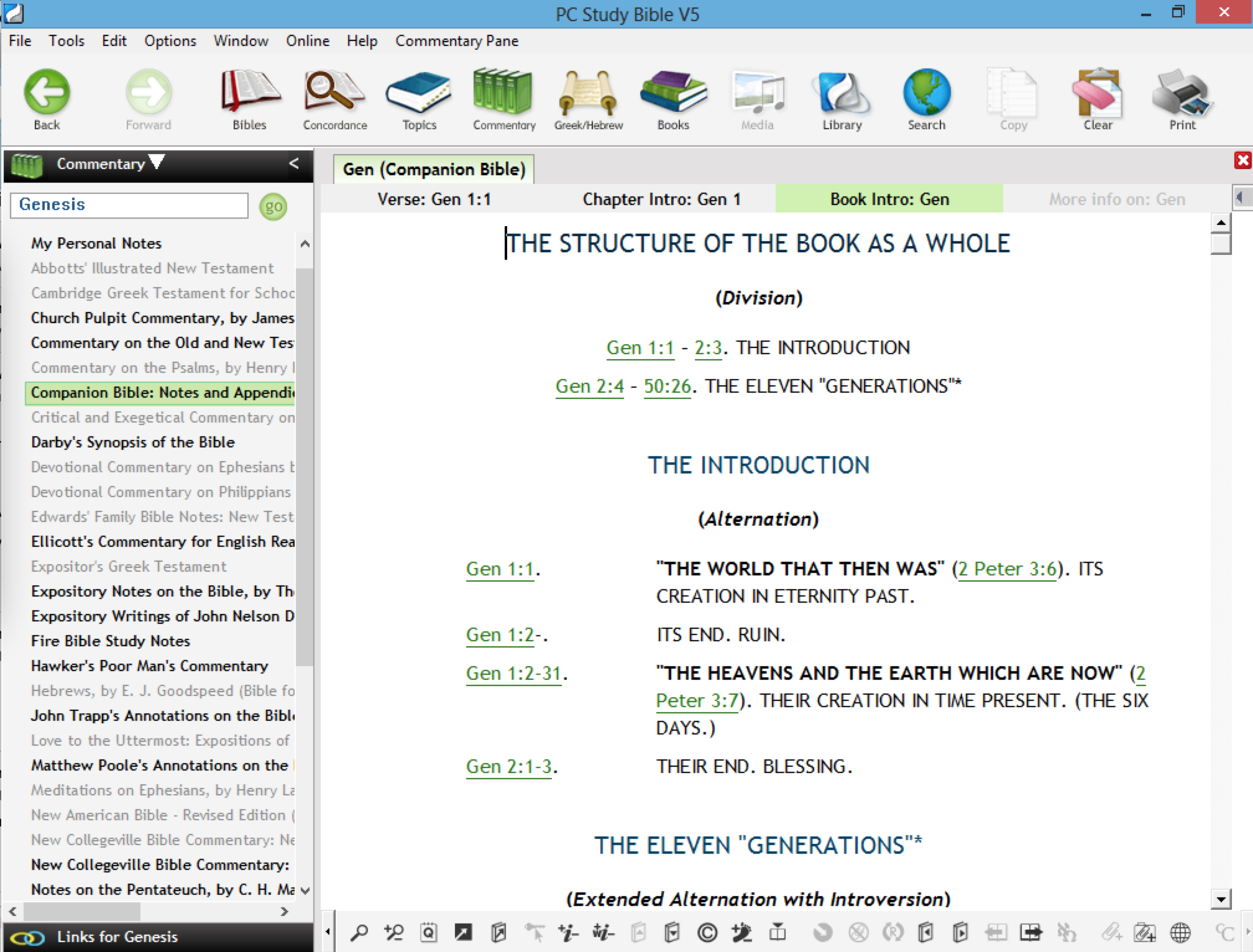 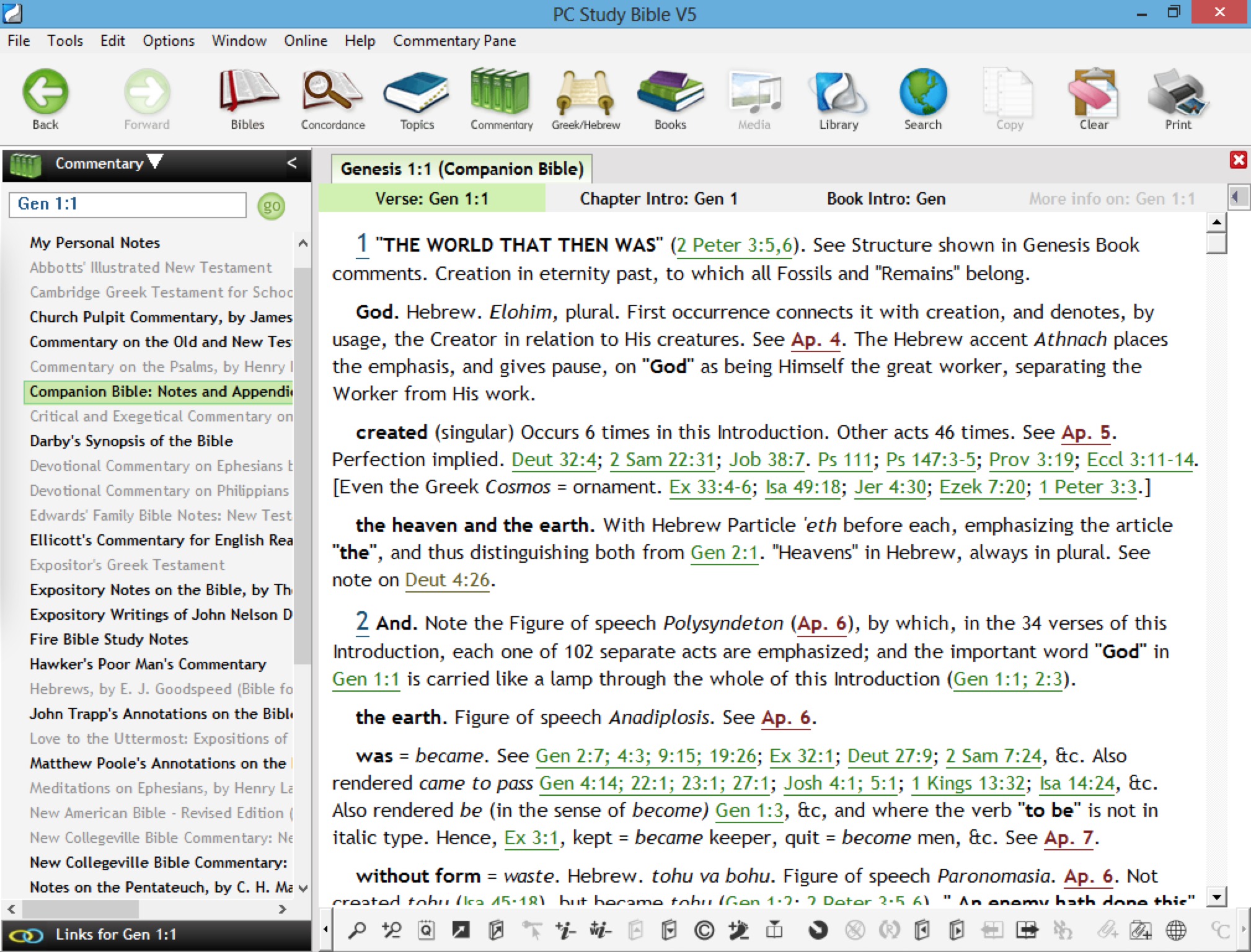 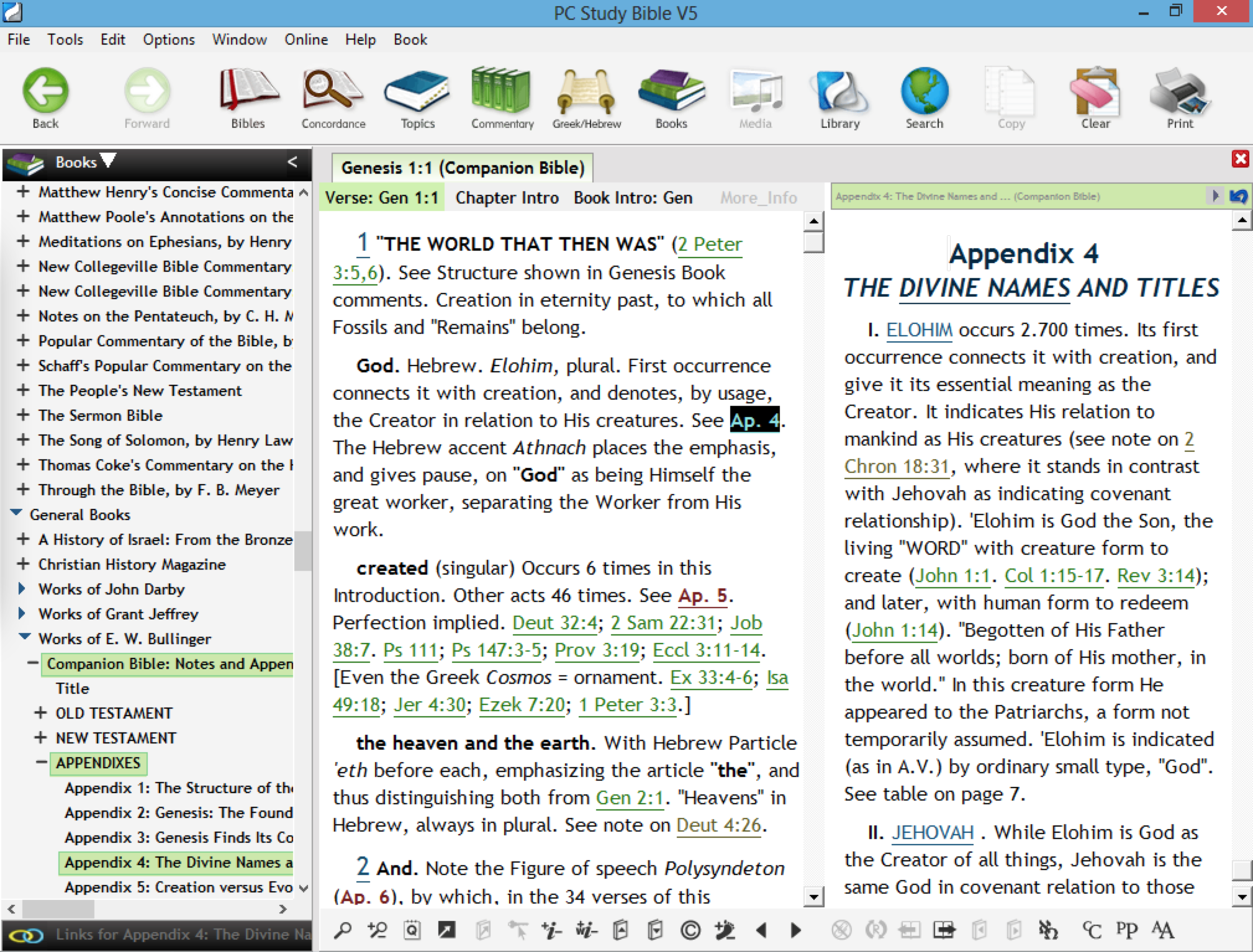 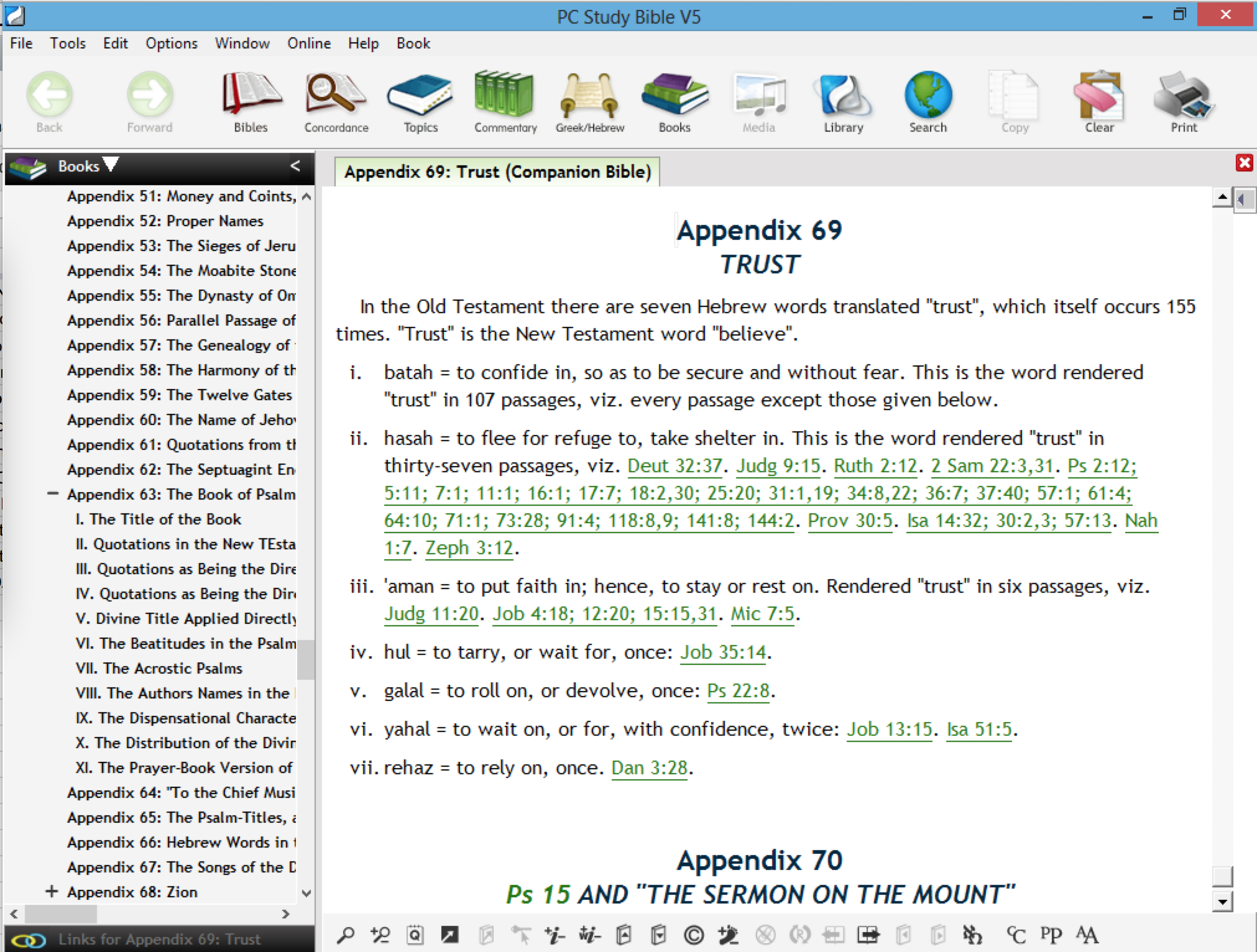 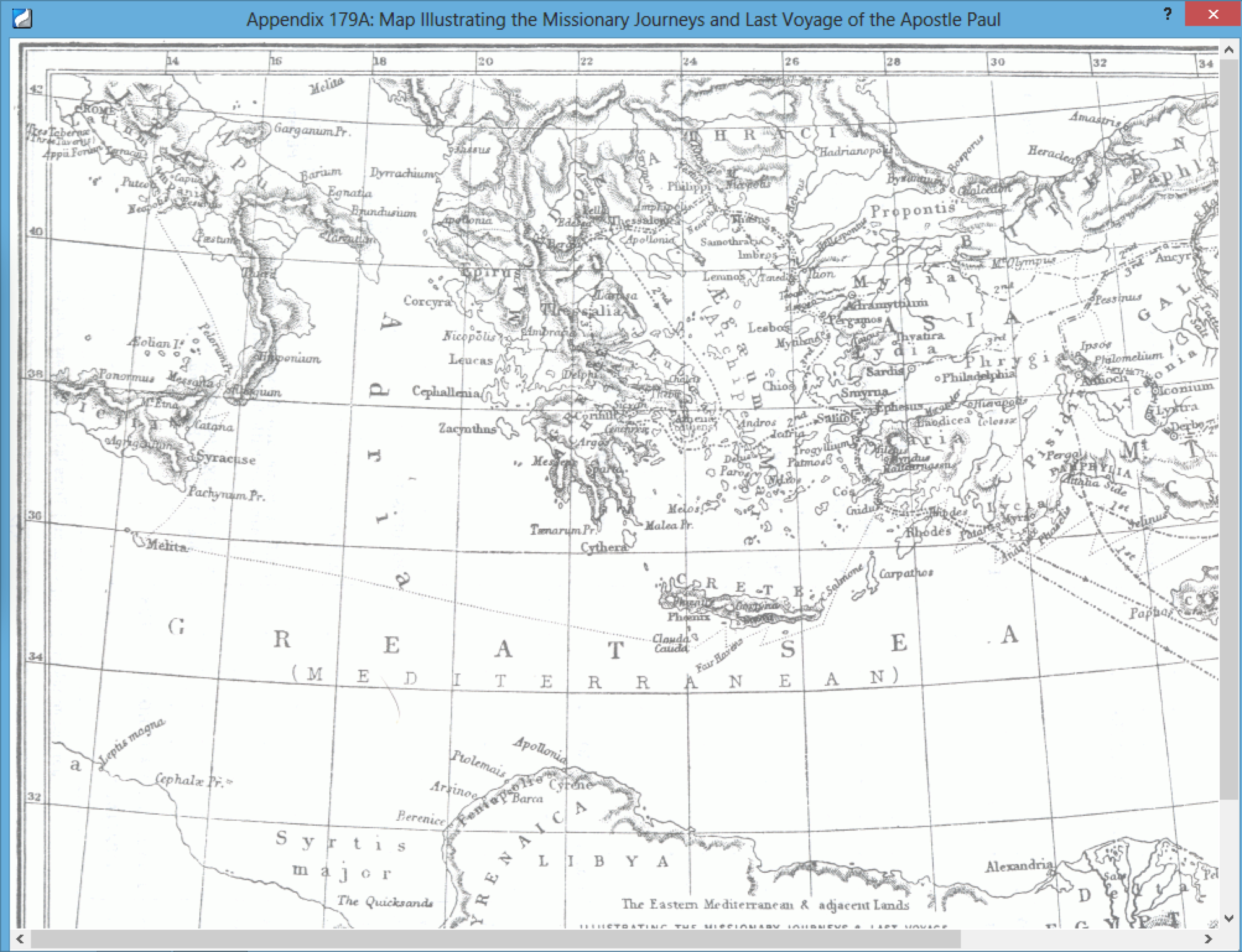 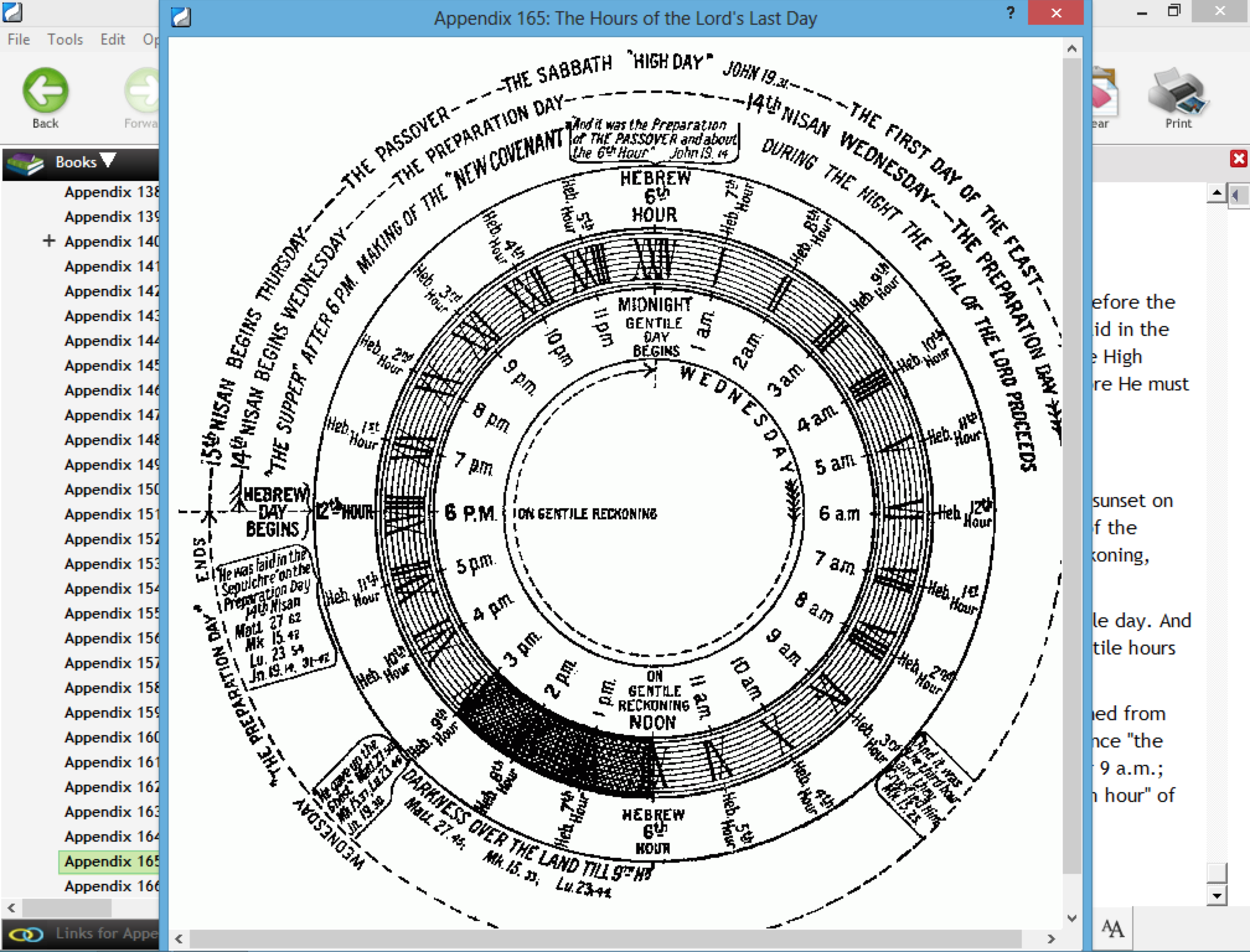 The same purpose and design are seen in the presentation of the Lord as having the Divine attribute of Omniscience. This is not entirely absent in the other Gospels; but it pervades the fourth Gospel, and is manifested by much more frequent reference (see Table below). In this connection the presentation of the Lord as God required special words which are not needed and are not found in the other Gospels. Attention is called to some 84 in the notes.

But of important words which are characteristic of this Gospel, and are found in other Gospels, the necessity of their more frequent use will be seen from the following examples which are set out below, and referred to in the notes. In most cases the number of the occurrences is more than in all the other three put together.

It is not only the use of certain words that characterizes this special presentation of the Lord, but the absence of others is equally instructive. For, as in Matthew and Luke the Lord is constantly addressed as "Lord", but not often in Mark, where it would not be in keeping with His presentation as Jehovah's servant; so in John the Lord is never represented as praying5 to the Father as in the other Gospels, but always as saying or speaking to Him. This is a special characteristic of the fourth Gospel, wonderfully in harmony with its great design. On the other hand, prayer is specially required on the part of a king (as in Matthew) in respect of his delegated authority (Matt 14:23; 26:36,39,42,44); also on the part of a servant, in respect of His assumed subjection (Mark 1:35; 6:46; 14:32,35,39); and of an ideal Man in respect of his dependence upon God at all times (Luke 3:21; 5:16; 6:12; 9:18,28,29; 11:1; 22:41,46). Thus, while in the first three Gospels the Lord is presented on the side of His humanity, as in prayer on eight occasions, not once is He so presented in John's Gospel.5 And the reason is obvious. Moreover, He "lays down" His life; no one takes it from Him. This occ. only in John 6

3 In order to emphasize the greater authority with which the Lord spoke, as God, and as coming with double importance.

the Word was God. This is correct. The Art. designates "the Word" as the subject. The order of the words has to do only with the emphasis, which is thus placed on the predicate, while "the Word "is the subject.

was God. Here "God "is without the Art., because it denotes the conception of God as Infinite, Eternal, Perfect, Almighty, &c. Contrast John 4:24.

26 other products in the same category: