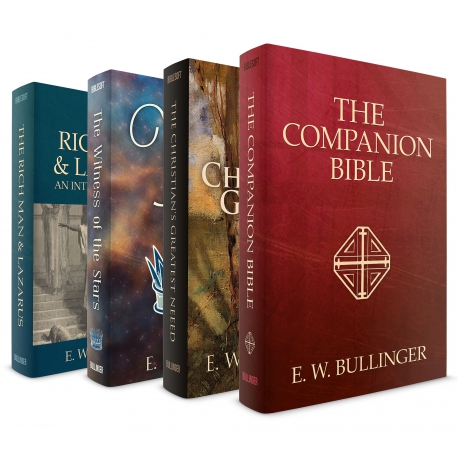 A collection of 4 titles by E. W. Bullinger: The Companion Bible Notes, Witness of the Stars, The Christian's Greatest Need, and The Rich Man and Lazarus.

A collection of 4 works by E.W. Bullinger:

Witness of the Stars

The Rich Man and Lazarus

The Companion Bible Notes, by E. W. Bullinger, is a very popular study aid with an avid following. Used by many since the early 1900’s and based on the KJV, it has excellent textual study notes and detailed outlines on numerous thematic studies. The work also includes 198 different appendices of Hebrew and Greek words and their use, additional studies on biblical usage of figures of speech, study charts, lists of proper names, calendars, timelines, and much more.

Many of the Old Testament notes contain references to a significant work by Christian David Ginsburgon the Massorah (small writings in the margins of the Hebrew texts).  Bullinger is reportedly the only Christian that Ginzberg allowed to help him with his collection of the Masoretic Notes or even to see them.

Bullinger’s work is widely read in Dispensationalist circles and also by others interested in his unique and sometimes controversial studies on subjects often avoided by other scholars.

The outlines and appendices are regarded by many as the best parts of the Companion Bible, and are extensive. Bullinger produced an expanded, compound outline set for each book and connected it to notes throughout.  Biblesoft has enhanced the accessibility of these outlines by producing a simplified and streamlined outline at the beginning of each book in order to help you get the most from them.

There are also a significant number of Word Studies - especially in the New Testament. Notes with Hebrew and Greek analysis also give alternate translations of critical passages and list other relevant texts.

Note: This title interfaces with the Bible versions you already have installed in PC Study Bible. It is not a standalone Bible. (This work was based on the KJV.)

The Witness of the Stars

A popular book by E.W. Bullinger with a very unique theme. Taking up an interest in the historical and cultural background to the origins of the zodiac relationship to biblical concepts, Bullinger did a lot of work looking at the idea from a Biblical point of view.  One very interesting technique was the comparison of the original constellation and star meanings with texts in the Old and New Testaments.

He explores the star names in various ancient languages as well as corresponding scripture. A highlight of the book is his carefully researched word studies tracing roots from Hebrew, Greek, Arabic, and other languages. Celestial charts and diagrams are also provided to lend support to his conclusions.

In this short book Bullinger dives into what he believes is the core of the Christian experience: Obtaining “A true knowledge of God.”  The book then goes into detail about how we attain that and what it means to the Christian life, worship and state of being once we do.

The Rich Man and Lazarus: An Intermediate State?

Bullinger deals with Luke 16:19-31 in the context of what is called the  'intermediate state.’ He examines traditions of death and Hades, including Pharisaic traditions of death and afterlife and arrives at some controversial conclusions. His thesis: "…It is absolutely impossible that the traditional interpretation can be correct, because, if it were, it would be directly opposed to all the other teaching of Scripture."