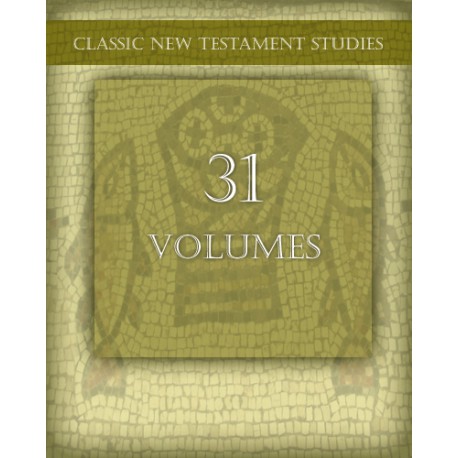 Biblesoft's Classic New Testament Studies is a definitive 31-volume collection that captures the viewpoints and commentary of the most important theological movements and opposing arguments of the late eighteenth through early twentieth centuries.

Biblesoft's Classic New Testament Studies is a definitive 31-volume collection that captures the viewpoints and commentary of the most important theological movements and opposing arguments of the late eighteenth through early twentieth centuries.

Included in this collection:

Introduction to the New Testament, by Louis Berkhof    An investigation of the history and purpose of the Gospels and Epistles in the New Testament. Berkhof's sections begin with a brief outline followed by a comprehensive look at the characteristics, authorship, composition, and canonical significance of each New Testament book. Introduction relies on the findings of a wide range of New Testament scholars including the early Church Fathers. Berkhof's references are easy to navigate making this a prime text for student study, which it was during Berkhof's tenure at Calvin Theological Seminary where he taught for nearly 30 years.

The Miracles of Jesus, by Karl Beth  A historical-critical and history-of-religion analysis written in response the the more radical-skeptical 19th cent. treatments of the 'historical Jesus'. The author is firmly in the line of German scholarship stemming from Harnack's historical research and writings on the transmission of scripture through the early church fathers.

Causes of the Corruption of the Traditional Text of the Gospels, by John W. Burgon A valuable treatment of New Testament textual criticism, especially the issue of textual 'corruption' resulting from the rise of variant readings from a late 19th cent. perspective. The chapters provide a still-useful overview of the types and causes of these variant readings, with many examples from the Gospels. The author is also a strong adherent of the 'Majority Text', and a pronounced opponent of the approach taken by Tischendorf, Westcott & Hort, etc., in their critical editions of the New Testament.

The Last Twelve Verses of the Gospel of Mark, by John W. Burgon  A vigorous and learned defense of the originality of the 'long ending' of Mark (16:9-20). In Burgon's day, following the discovery of Codex Sinaiticus [a] and Vaticanus [B], critical scholars were already doubting the originality of these verses; despite Burgon's work of reviewing and refuting all supposed evidence produced against these verses. He proves some false, misconstrued, and none of any force in proving the verses anything but genuine. No one has ever dared to answer Burgon point by point. Burgon poses stubborn fact to which critics offer subjective opinions, circular reasoning, but no facts. The tide of opinion today is even further against him; evangelical scholars are split on the question, tending toward the critical view.

The Gospel According to St. Mark, by J. A. Chadwick A popular devotional/expository commentary (from The Expositor's Bible).

Lectures on the Acts of the Apostles, by John Dick  A Scottish preacher and professor of Theology, Dick's fame rests primarily on these Lectures on Acts, which were and still are popular in published form. Expository, with some historical background and detail provided.

Commentary on Ephesians, by Charles Hodge Best known for his Systematic Theology, Hodge's New Testament commentaries are still highly regarded in Reformed circles. This work on Ephesians is extremely thorough and deals extensively with the Greek text.

The Epistle of James, by F. J. A. Hort A commentary based exclusively on the Greek text by one of the foremost NT textual scholars (half of the team that produced the famous 1881 critical edition). Very detailed, with a thorough introduction; but the commentary itself was unfinished due to the author's death.

Commentary on John, by Barton Warren Johnson  a distinguished American minister, probably best known for his People's New Testament, this Commentary on the gospel of John is quite a thorough work. It is subtitled Volume 3 apparently of a larger NT commentary ("A Commentary for the People").

Dissertations on Theological Subjects Connected with the Study of St. Paul's Epistles, by Benjamin Jowett A collection of interesting essays touching on key theological points from Paul's epistles and theology. Written largely from the standpoint of the History of Religions and Philosophy, his scriptural interpretations were rather controversial at the time from his perspective as a (somewhat unorthodox) Greek scholar who specialized in the works of Plato.

The Epistles of Peter An Expository Commentary on Both Epistles, by J. H. Jowett  In this classic study, distinguished British/American pastor J.H. Jowett deals with passages which are at the same time full of meaning and difficult in terms of interpretation. Jowett's skills of interpretation are blended and expressed through the vehicle of a unique literary style in a commentary that is both scholarly and devotional.

The Friend on the Road and Other Studies in the Gospels, by J. H. Jowett A series of approx. 60 short homilies or sermon illustrations, very much in the simple devotional style.

From the Talmud and Hebraica, by John Lightfoot From a landmark 6-vol. work, this is an exegetical commentary on Gospel passages citing relevant background or supplementary information from the Talmud and other Rabbinic sources (as they were known and understood at the time). In addition to the verse-by-verse commentary, there are supplemental geographical and cultural notes.

Commentary on the Acts of the Apostles, by J.W. McGarvey  An expository commentary by the distinguished American pastor and scholar.

The Four-fold Gospel, by J. W. McGarvey and Philip Pendleton A work chronicling the life of Christ, which was intended especially for use by Sunday School teachers. The detailed format is handled effectively, and each parallel section/event has a numerical index number (1-145). Theologically conservative, though not polemical, it has all of the expected harmonizing tendencies and explanations.

Moffat New Testament Commentary, by James Moffat (General Epistles: James, Peter, Jude) A commentator and professor of church history, Moffat is no doubt best known for his popular (and occasionally controversial) Moffat Bible translation. The Moffat New Testament Commentary series was written 1928-49; this is the volume on the General Epistles. His commentaries are thorough and exegetical, but do tend to be theologically critical of the standard theories regarding biblical authorship.

Messages from the Epistle to the Hebrews, by H.C.G. Moule Traditional and conservative, this is an exegetical and devotional commentary, from the Anglican bishop better known for his poems and hymns.

Expositions of the Epistles, by Augustus Neander (Philippians, James, 1 John) From the famous Church historian, these expositions, intended to be part of a larger series of commentaries, cover three of the Epistles. They are generally exegetical, but the work on Philippians is presented more in summary fashion.

The Life of Christ, by Augustus Neander Neander's famous Life of Christ, written as a direct response to D. F. Strauss' Life of Jesus. Like many critical German scholars of the time, he felt the need to answer the more radical critical theories of Strauss, F. C. Baur, et al. This work is important for its historical context of grappling with ideas and theories   of German scholarship which modern American evangelicals tend to dismiss.

Why Four Gospels? by Arthur W. Pink  An introductory study of the Gospels, focusing on aspects and elements unique to each, with certain passages examined in more detail.

Was Christ Born in Bethlehem?, by W. M. Ramsay A famous study on the Lukan birth narrative, especially with regard to the historical problem and the historicity of the Gospel in general. As such, it has proven quite popular over the years as an aid to New Testament apologetics.

St. Paul the Traveler and Roman Citizen, by W. M. Ramsay Ramsay, a classics scholar and well-traveled geographer, made important contributions to the study of Early Christianity and the historical-cultural background of Christianity in relation to the Roman Empire. This life of Paul has been extremely popular for its detailed historical chronology which integrates information from the Epistles and Acts.

Letters to the Seven Churches of Asia, by W. M. Ramsay  A thorough treatment of the historical background of Revelation 2-3.

The Johannine Writings, by Paul W. Schmiedel An introduction and survey of the Johannine Writings (the Gospels, Epistles and Revelation), but the vast majority of the book is devoted to the Gospel, especially its historicity and relation to the Synoptics. Schmiedel, a professor of theology and NT exegesis typifies German critical scholarship (from an evangelical point of view) - penetrating analysis, with a more liberal-critical viewpoint.

Origin of the Four Gospels by Constantine Tischendorf One of the most famous and influential of all New Testament scholars, Tischendorf's discovery of the Codex Sinaiticus is legendary, and his numerous critical editions of the NT mark him as a pioneering text-critical scholar. This work demonstrates the historical witness of the four gospels in the early church; namely, that they were attested and in use, rather than being written by the second century A.D.

When Were Our Gospels Written?, by ConstantineTischendorf A bit more detailed and organized work covering much of the same subject matter as above; it also includes a narrative of the discovery of Codex Sinaiticus.

Commentary on the Epistles to the Seven Churches, by R.C. Trench (Rev. 2-3) A thorough exegetical treatment of Rev. 2-3, written by the distinguished NT scholar and Anglican archbishop.

The Sinlessness of Jesus, by Carl Ullmann Written by a distinguished German professor of church history and dogmatics, this work (subtitled "An Evidence for Christianity"), is, like Neander's â€œLife of Christâ€, an answer to D. F. Strauss' Life of Jesus, and the more radical-liberal historical criticism it represents.

The Christ of History, by John Young An apologetic work which takes the interesting approach of attempting to use the objective historical facts of the human person Jesus of Nazareth to demonstrate his deity.