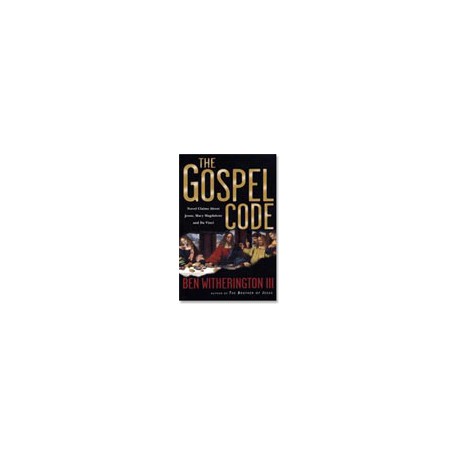 Unlike so many critiques that carefully mince words, Ben Witherington explains exactly why currently popular attempts to treat the historical Jesus in a revisionist manner are so wide of the mark.

Just in time to answer your friends' questions – The Gospel Code arms you with the biblical and historical truth about Jesus, Mary and Da Vinci. Recently, Dan Brown's international bestseller now made into a movie, The Da Vinci Code , has raised many questions in the minds of readers:

• Did he father a child with her?

• Did Constantine suppress the earliest Gospels and invent the doctrine of Christ's divinity?

• Do the Gnostic Gospels represent the true Christian faith which the early church sought to supplant?

Ben Witherington III confronts these claims with the sure-footedness of a New Testament scholar, yet in the plain language that any interested reader can follow. He takes us back to the early centuries after Jesus' death and tells us what we can really know about Jesus, Mary Magdalene, the canonical Gospels and their Gnostic rivals in The Gospel Code.

Benefits you will enjoy:


• Offers biblical perspective on the The Da Vinci Code

• Addresses the claims of other popular, controversial books, such as Beyond Belief, The Gospel of Mary of Magdala, The Woman with the Alabaster Jar, Reading the Bible Again for the First Time and Holy Blood, Holy Grail .

• Presents what we can really know about Jesus, Mary Magdalene, the canonical Gospels and their Gnostic rivals

• Accessible to the general reader

The Da Vinci Code , in blurring the lines between fact and fiction, popularizes the speculations and contentions of numerous more serious books that are also attracting wide attention. How should we respond to claims that we now have documents that reveal secrets about Jesus, secrets long suppressed by the church and other religious institutions? Do these new documents successfully debunk traditional views about Jesus and early Christianity?

Dr. Witherington contends that we are in an age where the saying has come true— For the time will come when people will not put up with sound doctrine. Instead, to suit their own desires, they will gather around them a great number of teachers to say what their itching ears want to hear. They will turn their ears away from the truth and turn aside to myths' (2 Timothy 4:3- 4) . “These seem to be such times, times when people will indeed believe things that are beyond belief.' This book is intended as a wake-up call to those who have not been noticing the signs of the times,” he states.