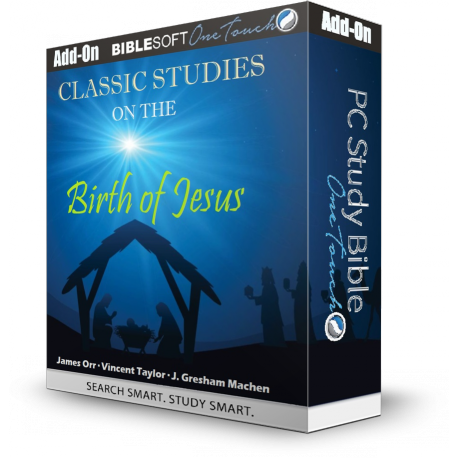 Three Classic Studies on the Birth of Jesus

Works of three well-known scholars from the early 20th century (James Orr, Vincent Taylor, and J. Gresham Machen) on the Birth of Jesus and, in particular, the doctrine of the Virgin Birth.

Three Classic Studies on the Birth of Jesus

In celebration of Christmas, Biblesoft brings together works of three well-known scholars from the early 20th century: James Orr, Vincent Taylor, and J. Gresham Machen, each of whom made significant contributions to a study of the Birth of Jesus (as narrated in the Gospel of Matthew and Luke) and the doctrine of the Virgin Birth. Nearly all subsequent scholarly treatments of the subject depend in some way on their work.

Derived from a series of lectures given in New York to the Bible Teachers' Training School, Orr's groundbreaking work was among the first and most influential on the subject to come from the traditional-conservative (Reformed/Evangelical) side in the wake of the so-called "Fundamentalist-Modernist" debates of the period. The Virgin Birth and the historicity of the Gospel narratives had both been seriously questioned and attacked by skeptics and critical scholars alike, and Dr. Orr presents a careful, learned defense of the traditional, orthodox view. The lectures (or chapters) cover:

James Orr is perhaps best-known today as editor of the original International Standard Bible Encyclopedia (ISBE), but produced many highly-regarded expository and theological works, such as The Resurrection of Jesus, which is a similar study to his work on the Virgin Birth. He wasProfessor of Apologetics and Systematic Theology in the United Free Church College, Glasgow, Scotland.

Vincent Taylor, The Historical Evidence for the Virgin Birth (1920)

Vincent Taylor offers a moderate critical examination of the subject, seeking to provide an objective study of the doctrine and its development within the early Church. He is respectful throughout, but does not stand as an advocate for the conservative, orthodox position. In this way, his study serves as a valuable complement and contrast to that of Orr. Taylor was an influential New Testament scholar and theologian, the author of many books—especially works on the Gospels and Christology—which are still read and consulted today. He was for many years Principal and Professor at Wesley College (Headingly, Leeds), as well as Examiner in Biblical Theology at London University and a Fellow of the British Academy (F.B.A.).

Here we have seven critical studies and lectures given by J. Gresham Machen, a leading figure of Evangelical (Reformed) Theology in the early 20th century, and stalwart defender of traditional-conservative orthodoxy against the more radical biblical criticism and theological "liberalism" of the period. Machen was Professor of New Testament at Princeton Seminary from 1906 to 1929 and subsequently helped found the Westminster Theological Seminary in Philadelphia. Machen also took a leading role in the formation of the Orthodox Presbyterian Church. All through the years, in his many writings, as well through sermons and lectures, he remained a defender of the traditional-conservative view in the so-called "Fundamentalist-Mondernist" debates, a pioneer of modern Protestant apologetics, and was a keen advocate of Christian education and missions. He also authored a popular introduction to New Testament Greek which is still used today. The six articles from the Princeton Theological Review (1905-27), included here, would form the basis for his book on the Virgin Birth (1930).