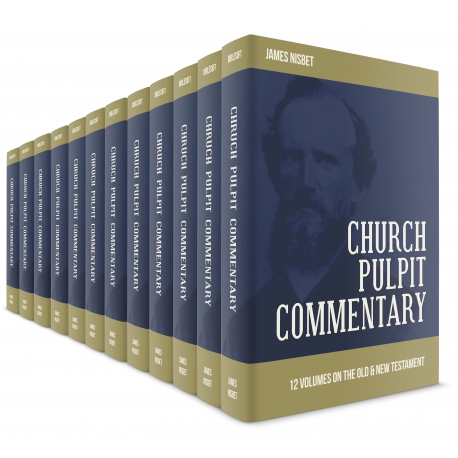 12 Volumes on the Old and New Testament edited by James Nisbet. Originally published in over 4,000 print pages, this is a solid, useful commentary for pastors, teachers and laymen in the church.

Originally published in over 4,000 print pages, the 12-Volume Church Pulpit Commentary is a solid, useful commentary for pastors, teachers and laymen in the church. This Old & New Testament Commentary provides a broad overview of Bible passages with articles that include short essays, sermon outlines, and sermon illustrations from selected verses of the Bible.

The Church Pulpit Commentary was compiled and edited by James Nisbet, an Anglican writer, editor and publisher. His publishing house, J. Nisbet & Co is most widely known for the wide variety of quality texts that they published, especially in regards to religious texts.

Over 100 authors contributed to this work including Thomas Arnold, Rev. F.D. Maurice and John William Burgon, Dean of Chichester Cathedral, Handley Carr Glyn (H.C.G) Moule, F.D. Maurice, and many other bishops and pastors. Arnold was a leader in the growing Anglican movement, as was Nisbet.

Note: This is a different title than the famous Pulpit Commentary, available here. 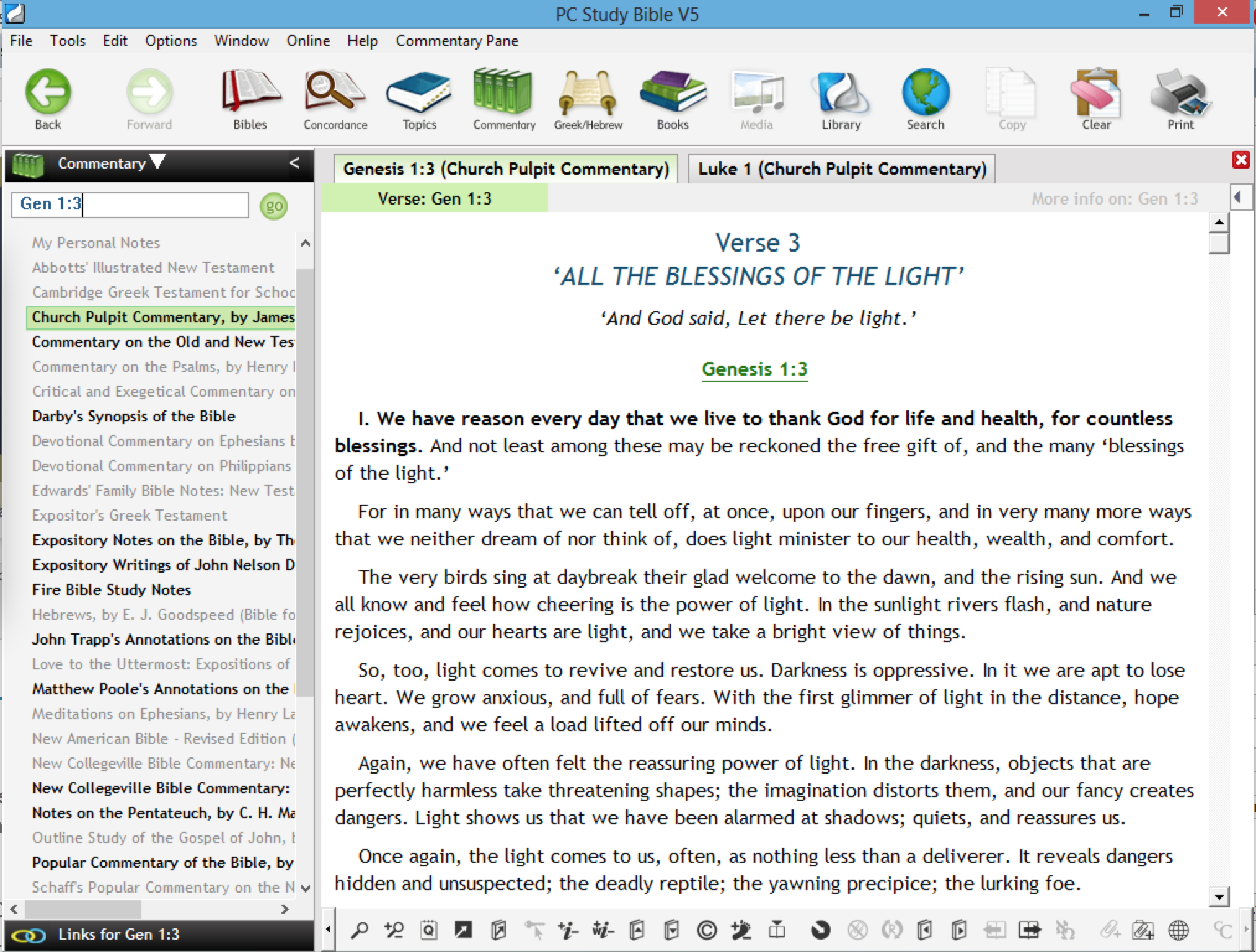 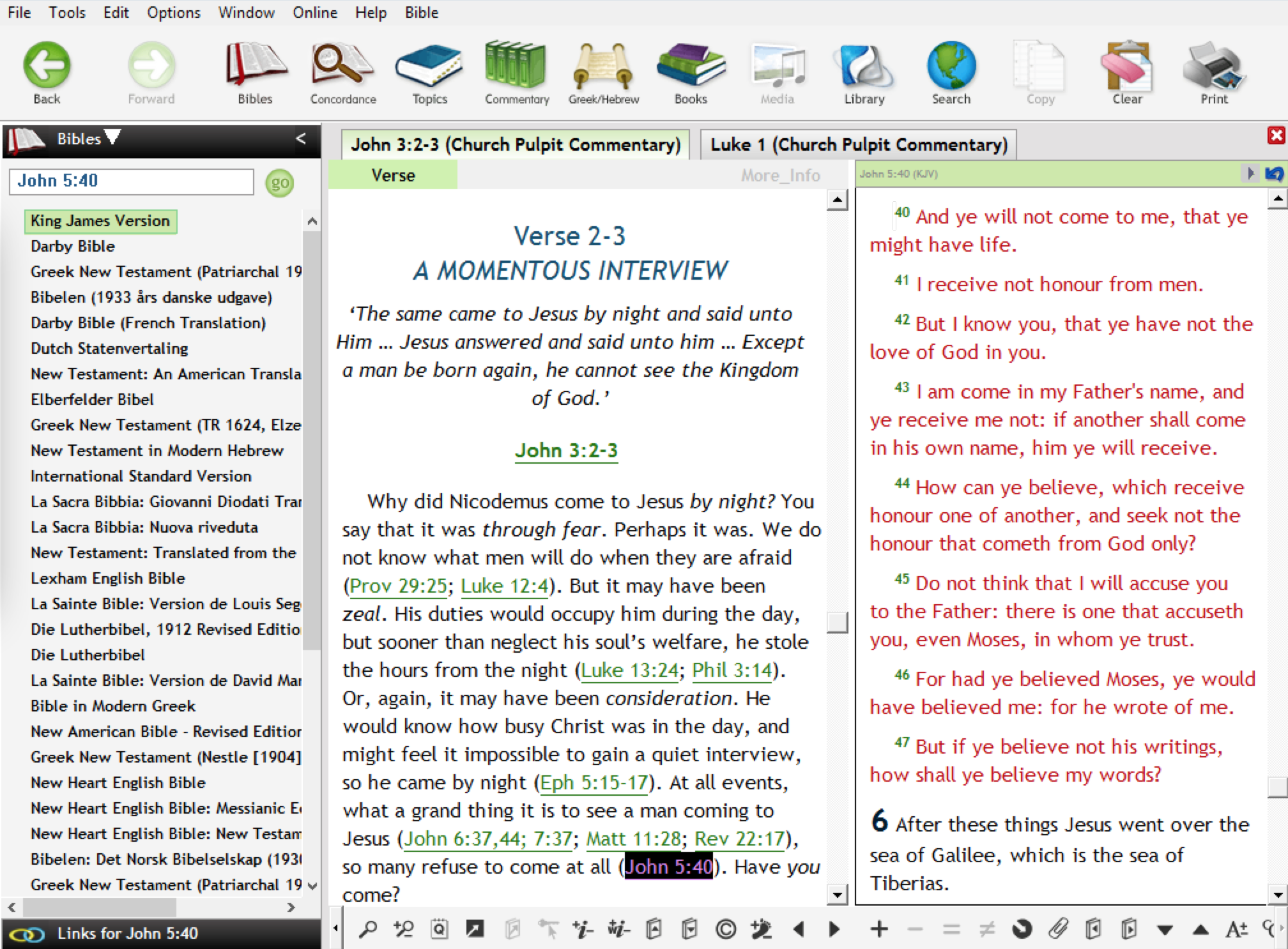 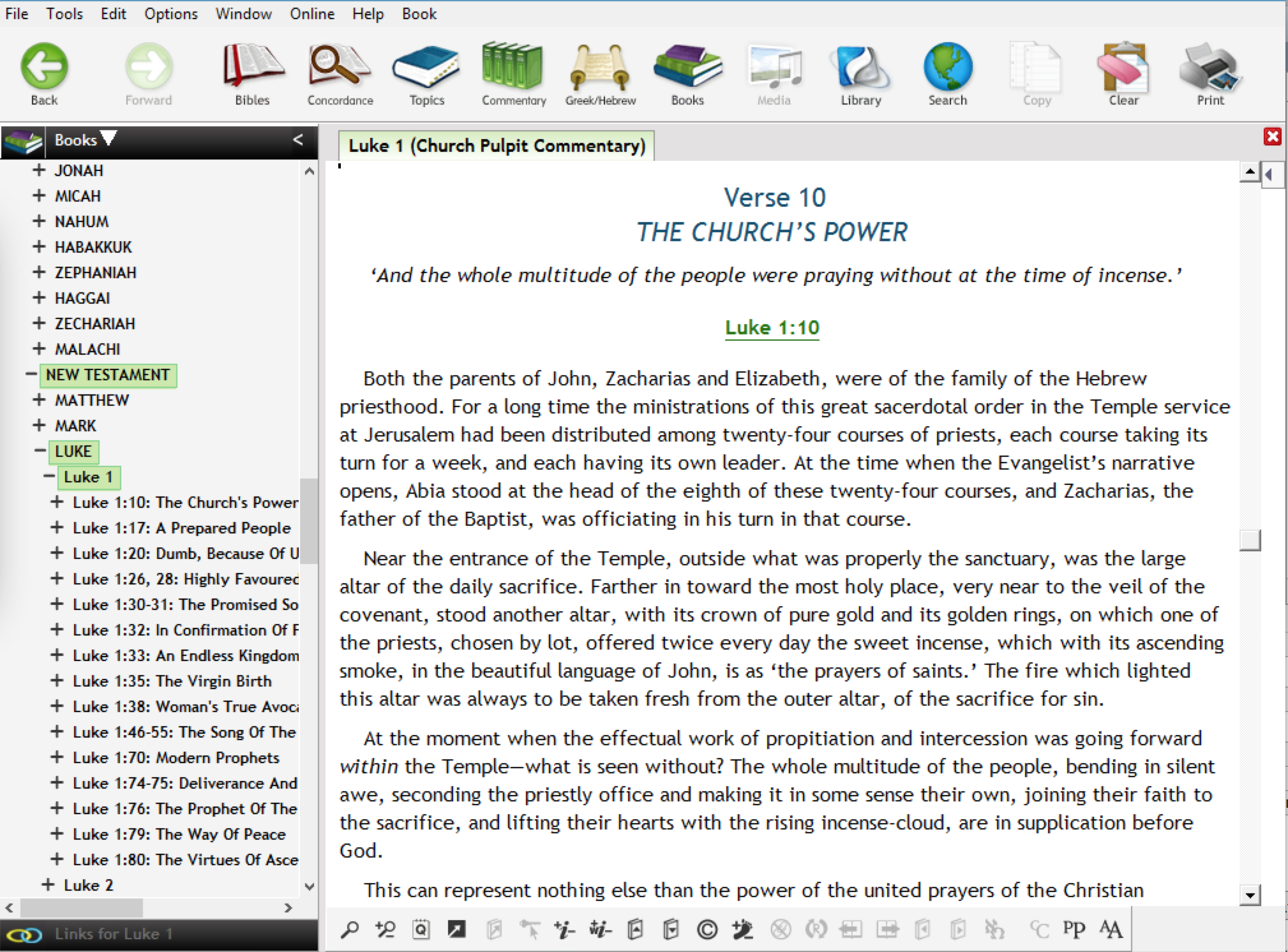 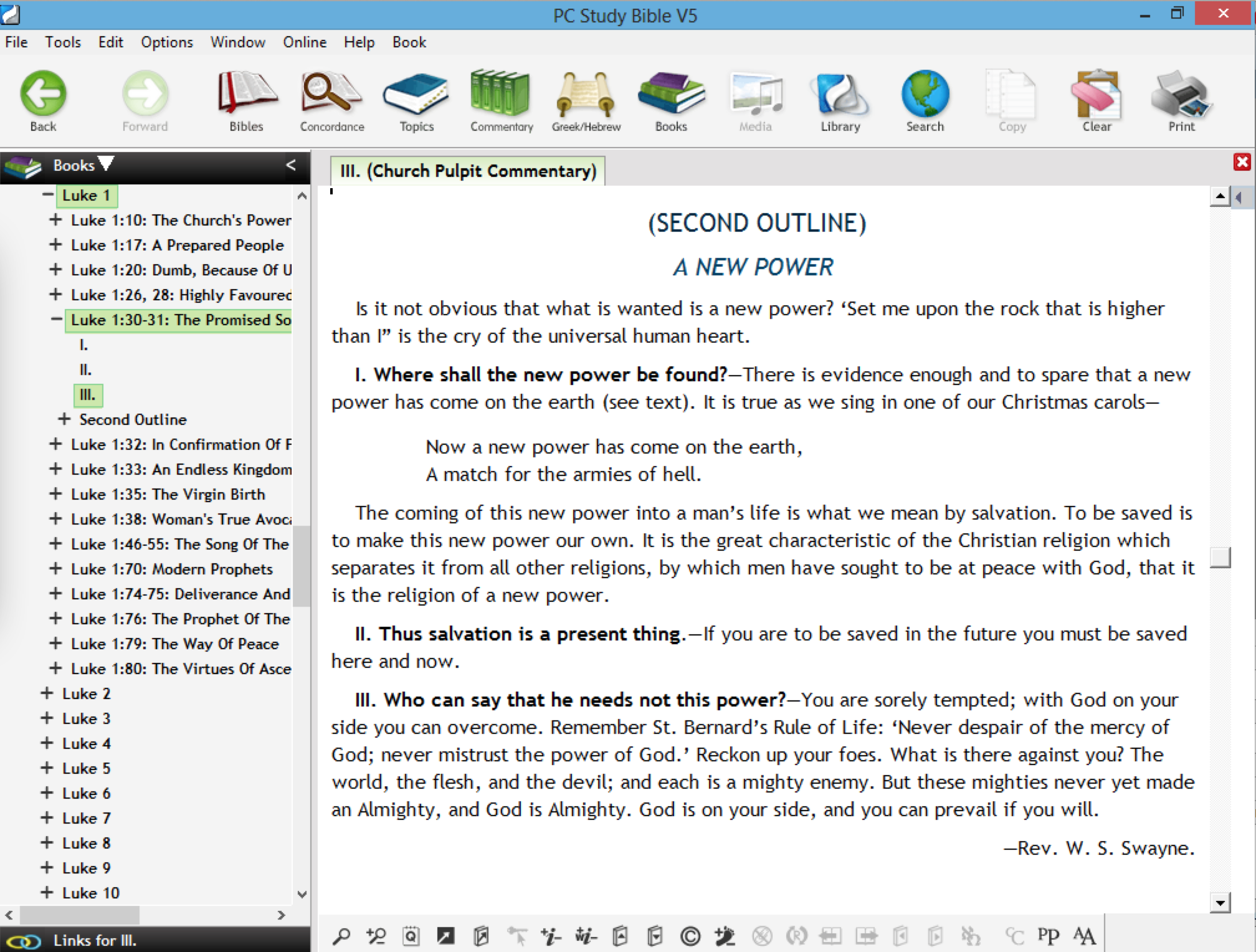 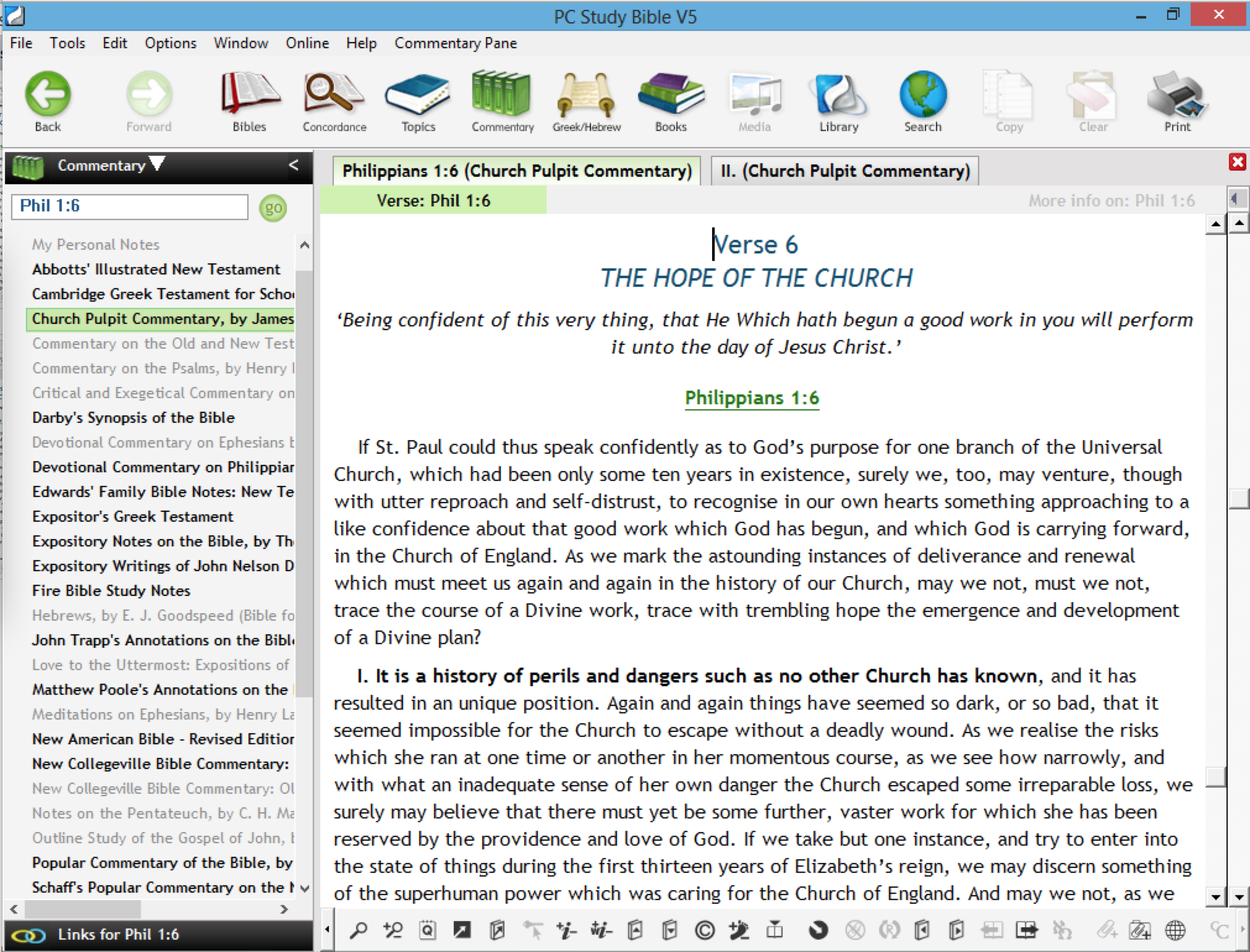 Verse 9
THE TREE OF DESTINY

‘The tree of knowledge of good and evil.’

I. We call the Scriptures a revelation; in other words, an unveiling. The Bible records were given to us to take away the veil which hung between heaven and earth, between man and God. Their purpose is to reveal God. The actual revelation which has been made to us is of God in His relation to the soul of man. We are not to demand, we are not to expect, any further revelation. Of the secrets of God’s power and origin we are told not a word. Such knowledge is not for us. But it does concern us to know of God’s moral nature—to know that He is all-powerful, all-good, all-loving; and of God’s power, goodness, and love, the Bible is one long and continuous revelation. The self-declared object of the Scriptures is that men should know God and know themselves.

II. But the condition on which such an object may be accomplished is this: that the Book of God should appeal to men in a form not dependent for its appreciation upon any knowledge which they may have obtained—independent, that is, of the science of any particular age or country. The setting forth of scientific truth in the pages of the Bible would have been as much a difficulty and stumbling-block to some former ages of the Church as what we call its unscientific account of natural phenomena has been to some at the present day.

III. ‘The tree of knowledge of good and evil.’ Here, so early in the sacred books, is revealed the fact of the two opposing forces of right and wrong. Take away the reality of this distinction, and the Bible and all religion fall for ever. Make its reality and importance felt in the soul of man, and you have at once whereon to build. Righteousness is the word of words throughout all Scripture. The righteousness which the Scriptures reveal is the knowledge of a communion with God. When our earth has played its part in the economy of the universe, and is seen by the few spheres which are within its ken to pass away as a wandering fire, right and wrong will not have lost their primeval significance, and the souls which have yearned and laboured for rest in the home of spirits will find that rest in Him who was and is to be.

(1) ‘Man though created sinless, was, from the very fact of his creaturely existence, not self-sufficing, but dependent both in body and soul, and thus the two trees of which we read in the text corresponded to those two wants in man’s constitution. The tree of life is nowhere forbidden to our first parents.’

(3) ‘As long as the prohibition was undoubted, and the fatal results certain, the fascinations of the forbidden thing were not felt. But as soon as these were tampered with, Eve saw “that the tree was good for food, and that it was a delight to the eyes.” So it is still. Weaken the awe-inspiring sense of God’s command, and of the ruin that follows the breach of it, and the heart of man is like a city without walls, into which any enemy can march unhindered. So long as God’s “Thou shalt not, lest thou die,” rings in the ears, the eyes see little beauty in the sirens that sing and beckon. But once that awful voice is deadened, they charm, and allure to dally with them.

In the undeveloped condition of primitive man, temptation could only assail him through the senses and appetites, and its assault would be the more irresistible because reflection and experience were not yet his. But the act of yielding was, as sin ever is, a deliberate choice to please self and disobey God.’