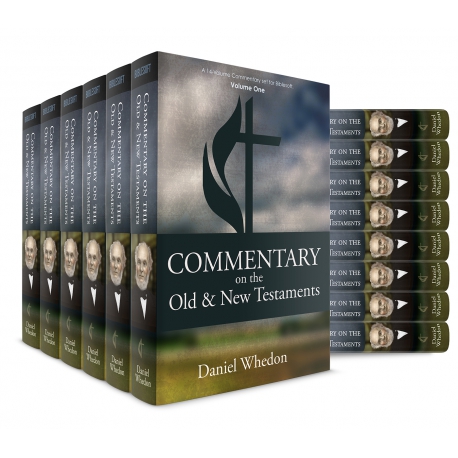 Whedon's Commentary on the Old and New Testaments (14 vols.)

Daniel Whedon’s 14-volume commentary was originally entitled "A Popular Commentary on the New Testament" (in 5 vols.). Other scholars and authors produced the remaining 9 Old Testament volumes, with Whedon acting as editor.

As a central figure in the struggle between Calvinism and Arminianism, Dr. Daniel D. Whedon’s works are studied to this day for context on the debate over free will and are on the shelves of most Methodist and Wesleyan collections.

This outstanding commentary analyzes the entire Bible, and provides background, history and word studies for each book. It is intended for the English reader and does not require a knowledge of the original languages.  The commentary includes introductions to the text (New Testament books), illustrations, and maps. Though intended for popular use, it is very comprehensive, with over 22,000 verse-by-verse comments. Easy to read and with a concise feel, it is still considered both scholarly and “readable.”

As one of the leading Wesleyan scholars in American history, Whedon is especially helpful in the exposition of the doctrine of Christian holiness. Dr. Leslie D. Wilcox declared, "This is certainly a clear presentation of entire sanctification as a presently attainable position."

Praise for this Commentary

Reviews after its release were glowing:

The New Testament part of the series is the ablest Methodist commentary since the days of Adam Clarke, and is in many respects superior to that monumental work. The Old Testament books were committed to various scholars who have wrought well, but unequally, on their respective tasks.

For the laborious work of construction, for accuracy of workmanship, and for general attraction of page, the present number of the series should be accepted with gratitude by the church.

Following is a breakdown of the volumes and their authors (Whedon wrote the entire NT portion himself). 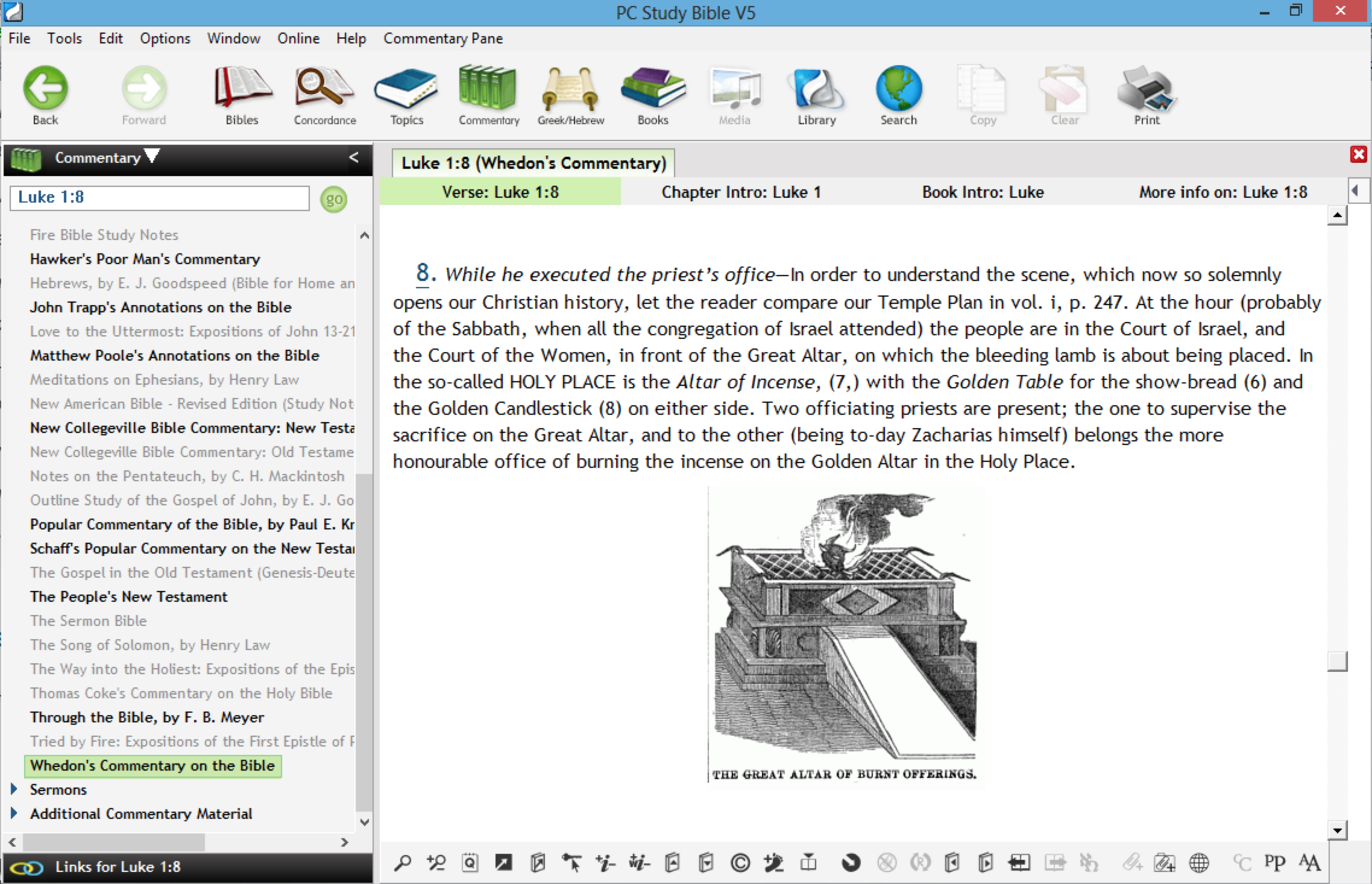 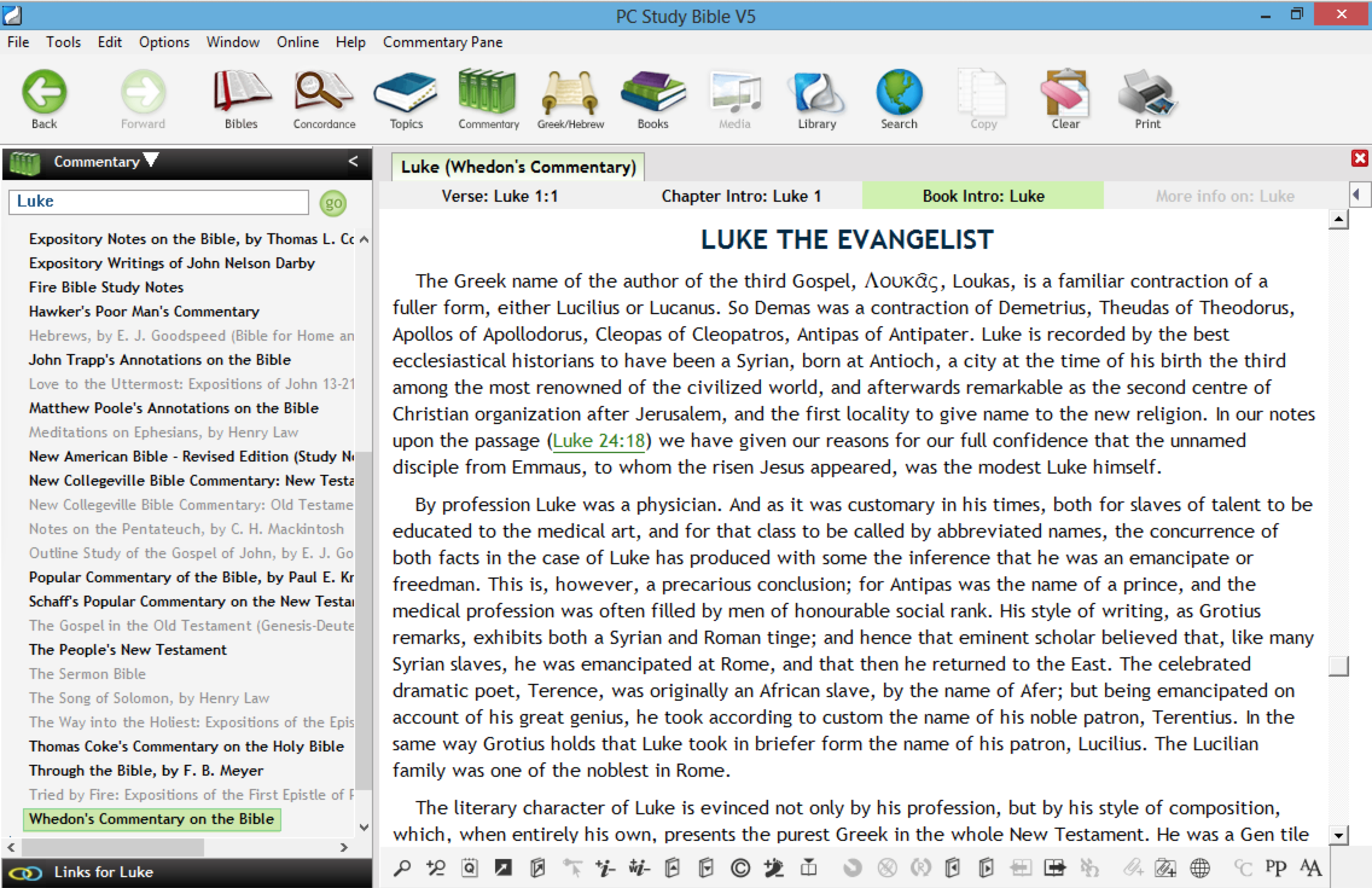 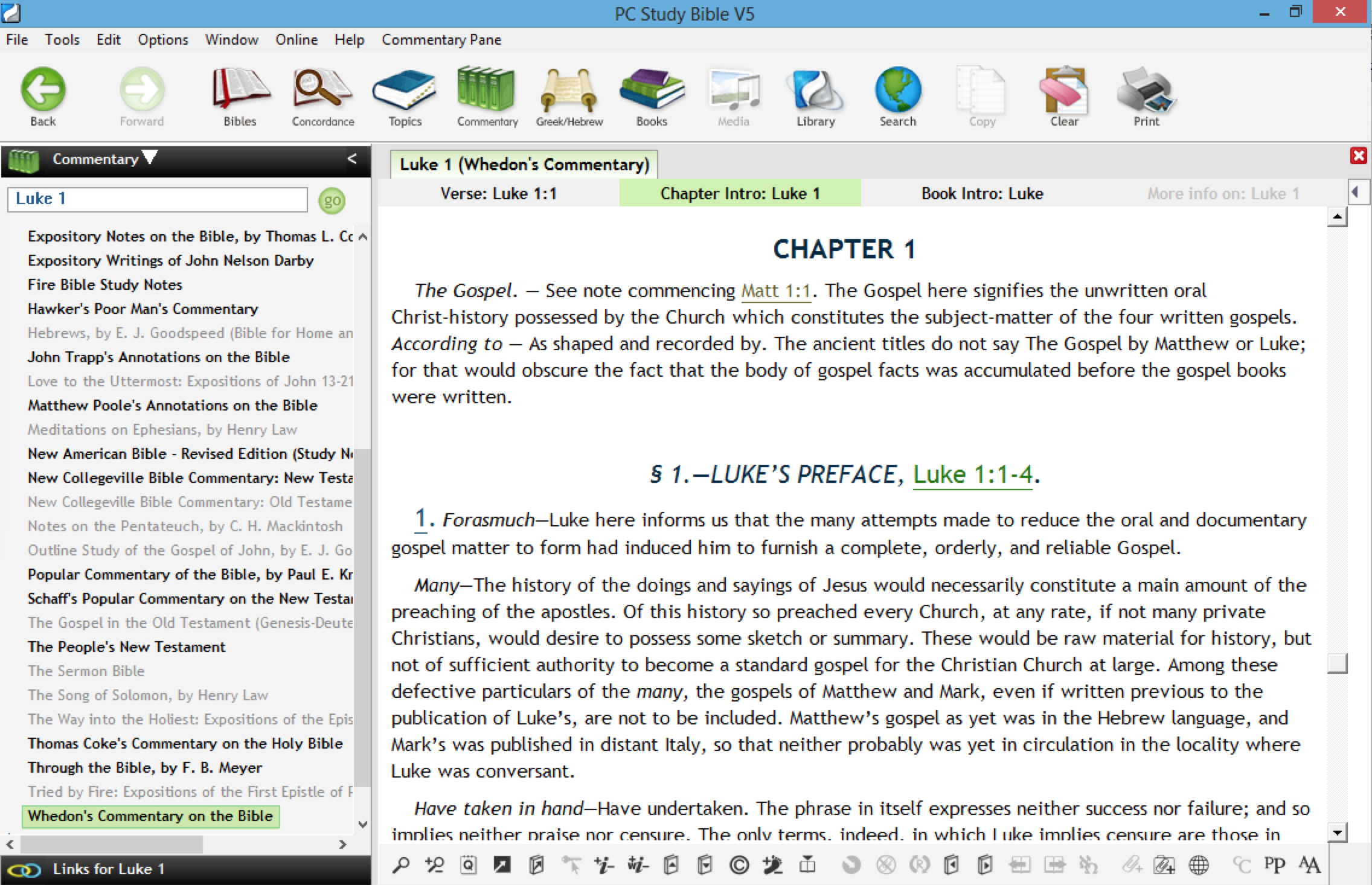 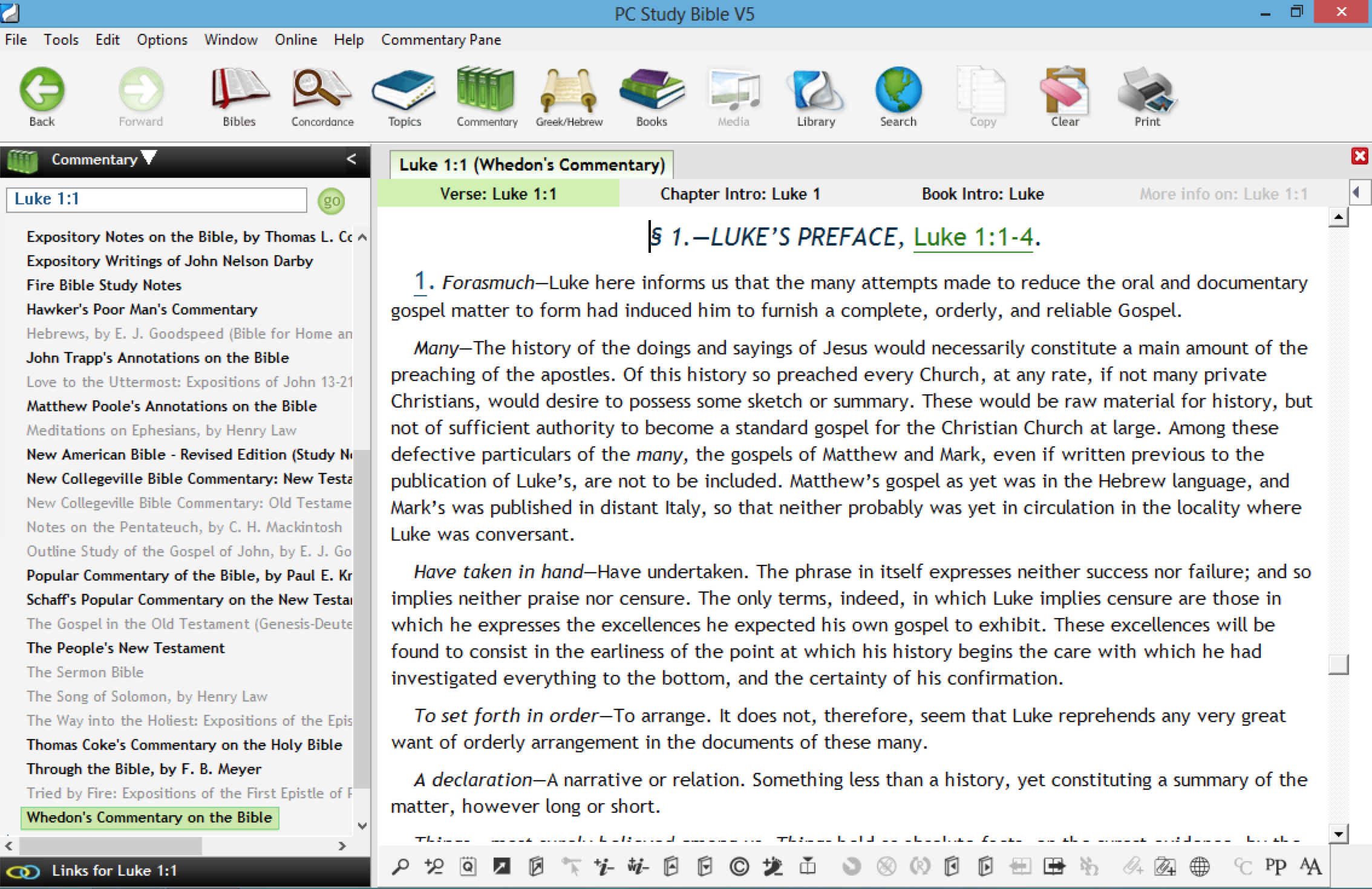 The Acts — The doings of the Apostles. This title, though older than any existing manuscript, and too early for any trace of its origin, was probably not given by Luke himself. It apparently expresses more than the real amount of the book, since little is said of more than two apostles, namely, Peter, who is the principal figure in the first twelve chapters, and Paul, who is the main subject of the remainder. Two chapters are more strictly the acts of the deacons rather than of the apostles. But as the Gospels could only give the do and teach (5:1) of Jesus by parts and specimens, (John 21:25,) so this book can give but partial samples of the apostolic acts, of which the doings of the deacons, being under their administration, are in some sense a part. Finally, some good manuscripts, omitting both definite articles, read "Acts of Apostles," which well fits the book.

1. The former treatise—Or narrative. That is, Luke’s Gospel.

Have I made—Rather, did I make.

Began—To this word Baumgarten, followed by Alford, assigns a meaning somewhat fanciful, yet pregnant with a rich truth. It assumes that the Gospel was Christ’s beginning of his mediatorial doings, and the Acts the great continuance: the former on earth, the latter in the heavens over the earth. The Gospel shows us Jesus terrene, the Acts, Christ celestial: the former as suffering, the latter as reigning. Hereby we see that our great Head, while allowing his Church to struggle amid trial and probation, does still overrule the whole; all to the good of his redeemed and his own glory. This brings into view the great number of instances in the Acts in which the transactions of the Church below are ascribed to the Lord of the Church above. So Baumgarten: “He it is, for instance, who again appoints the twelfth witness, (Acts 1:24;) who, after he himself has received the Spirit, sends him down from on high on his Church, (Acts 2:33;) who adds to his Church in Jerusalem, (Acts 2:47.) He it is who works miracles, both of healing and destruction, in testimony to his apostles’ preaching, (Acts 3:6; 4:10,30; 9:34; 13:11; 14:3; 19:13.) To his dying martyr Stephen he reveals himself standing at the right hand of God, (Acts 7:55-56;) his angel speaks unto Philip, (Acts 8:26;) it is his Spirit that caught him away, (Acts 8:39;) he appears to Saul of Tarsus, (Acts 19:5,27; 22:8,26;) his hand established the first Church among the Gentiles, (Acts 11:21;) his angel delivers St. Peter, (Acts 12:7,11,17;) his angel strikes the hostile Herod, (Acts 12:23;) he again it is who appears to St. Paul in the temple, and commits to him the conversion of the Gentiles, (Acts 22:17,21;) to him the apostles and brethren address themselves on the occasion of the first mission to the Gentiles, (Acts 13:2, cf. Acts 5:47;) to him are the infant Churches commended, (Acts 14:23;) his Spirit prevents the apostolic missionaries from preaching in Bithynia, (Acts 16:7;) he calls them by the voice of the man of Macedonia into Europe, (Acts 16:10;) he opens the heart of Lydia and effects the first conversion in Europe, (Acts 16:14;) he comforts and encourages Paul at Corinth, (Acts 18:9-10;) he strengthens him in prison, and informs him of his journey to Rome, (Acts 23:11.) These interventions of Jesus, so numerous, express, and decisive, are a sufficient warrant for our regarding his ascension as essentially his really sitting on his throne. We are, therefore, fully justified in ascribing all to his influence, even in those instances where, without any express mention of his name, we are referred to the invisible world. In this way, therefore, we must consider the conversion of the Samaritans by miracles, (Acts 8:6-12;) the restoration to life of Tabitha, (Acts 9:36-42;) the vision of St. Peter, (Acts 10:10-16.) And in like manner in those passages, also, where the Holy Ghost is spoken of as the efficient cause, as, for example, Acts 13:2, we must bring before our minds the Lord himself, for the Holy Spirit is the Spirit of Jesus, cf. Acts 16:6-7. And, also, in every mention of the name of God, as at Acts 27:23, we are to understand the person of Jesus, for, from Acts 1:22; 4:30, we learn that God works by Him.” We recognise the fact thus beautifully expanded, but do not recognise it as implicitly embraced in this word began. Luke, we think, refers to this beginning as a great commencement; the continuance is implied in the word until; the termination is at the day in which he was taken up.

Do and teach—His miracles, and his discourses authenticated by his miracles.

HISTORICAL NOTE I.— As we have intimated in notes introductory to, and also upon, Luke 3:1, our Saviour was born under the reign of AUGUSTUS CESAR, who was succeeded, when Jesus was about seventeen years of age, by TIBERIUS.

TIBERIUS was the first of that line of imperial tyrants whose crimes hastened the downfall of the Roman Empire. It was during his reign that the manhood and ministry of our Saviour were passed, and in its eighteenth year took place the crucifixion. While his imperial crimes were contributing to the dissolution of society the Pentecostal Church was rising, destined by the Divine hand to reconstruct the modern civilization of Europe and of our own America. About the period of Stephen’s rise the hand of one of the court favourites relieved the world of the imperial monster, March 16, A.D. 36.

CALIGULA, his successor, ruled four years, signalizing his reign by a series of fooleries and cruelties disgraceful to history. It is a fact which curiously illustrates his character, that, while his real name was Caius, yet his nickname Caligula (Little Boots) became his permanent historical appellation. One of his freaks was a project of requiring worship to be paid to his statue throughout the Empire. This brought him into a fearful collision with the Jews, who were ready to sacrifice their own lives in mass rather than commit an act of idolatry so heinous. So intense was the concentration of their minds on this subject that for the time being they forgot to persecute the Christians, and the Church had a period of repose. This emperor fell by the hand of an assassin, January 24, A.D. 41, in the twenty-ninth year of his age. It was during the four years of this man’s imperial pranks that the most earnest man of any age, Saul of Tarsus, was passing through the solemn scenes of his persecution of the Christian Church, his conversion; his residence in Damascus and Arabia, and his return to Jerusalem. Such are the contrasts of history. (See Hist. Note II at Acts 9:31.)