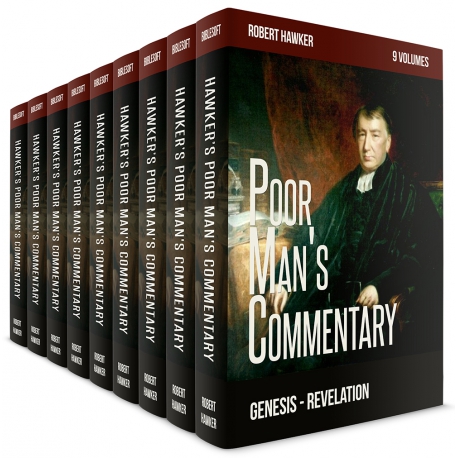 9-Volume Commentary on the Old and New Testaments by Robert Hawker, a favorite of Charles Spurgeon.

Robert Hawker was one of the most popular preachers of his time in England, drawing great crowds with his sermons which were famous for their description of the love of Jesus. Called “The Star of the West,” he could preach for over an hour and not lose the attention of a soul.

Charles Spurgeon spoke of the powerful influence Hawker had on his own preaching.

Now you can enjoy access to his penetrating devotional thinking and homiletic use of text in this attractive commentary, made up of six volumes on the Old Testament and three volumes on the New.

Joel R. Beeke, President of Puritan Reformed Theological Seminary, made this recommendation on the set:

“I have long cherished my nine-volume set of Robert Hawker’s Poor Man’s Commentary on the Old and New Testaments, not so much for its exegetical expertise as for its heartwarming, devotional character. ... Obviously, Hawker did not aim for the exegetical acuity of John Calvin, the homiletical breadth of Matthew Henry, or the pastoral succinctness of Matthew Poole. Rather, his purpose was to edify believers by providing spiritual and experiential comments on each section of Scripture. Consequently, these volumes are most profitable as a daily devotional rather than as a regular commentary.”

Hawker was considered an Evangelical, was an early pioneer in the Sunday School movement and was also known as a young combatant of the Unitarian movement (he did his doctoral thesis on a refutation of the doctrines of that group).  Widely praised for his humor, his bold and evocative preaching and his heartwarming stories of the love of Christ, John Hawker is an excellent addition to the library of all Christian preachers and teachers.

Here is a sample quote from his post on the coming destruction of Jerusalem from Luke 19:41-44:

“This view of the LORD JESUS is most lovely and endearing. We behold him here touched with the feelings of our nature, dropping tears over the beloved city, in contemplating her approaching ruin. And to be sure nothing can endear CHRIST so tenderly to the heart, as when we behold him manifesting the man of sorrows, and acquainted with grief…”

Nicodemus answered and said unto him, How can these things be? (10) Jesus answered and said unto him, Art thou a master of Israel, and knowest not these things? (11) Verily, verily, I say unto thee, We speak that we do know, and testify that we have seen; and ye receive not our witness. (12) If I have told you earthly things, and ye believe not, how shall ye believe if I tell you of heavenly things? (13) And no man hath ascended up to heaven, but he that came down from heaven, even the Son of man which is in heaven. (14) And as Moses lifted up the serpent in the wilderness, even so must the Son of man be lifted up: (15) That whosoever believeth in him should not perish, but have eternal life. (16) For God so loved the world, that he gave his only begotten, Son, that whosoever believeth in him should not perish, but have everlasting life; (17) For God sent not his Son into the world, to condemn the world; but that the world through him might be saved. (18) He that believeth on him is not condemned: but he that believeth not is condemned already, because he hath not believed in the name of the only begotten Son of God. (19) And this is the condemnation, that light is come into the world; and men loved darkness rather than light, because their deeds were evil. (20) For every one that doeth evil hateth the light, neither cometh to the light, lest his deeds should be reproved. (21) But he that doeth truth cometh to the light, that his deeds may be made manifest, that they are wrought in God.

I must not in a Poor Man's Commentary swell our pages, even though it be the words of Jesus that we are here attending to. What a lovely and sweet discourse is this of our Lord! Every verse is a sermon. But let me call the Reader's attention to those two most striking passages in the midst of it: I mean, first, of what Jesus hath said of his ascension, and descension, and everlasting presence in heaven; and, secondly, of what the Lord hath said in relation to the lifting up of the serpent in the wilderness.

The former of these passages will, I apprehend, appear very plain and obvious, if we consider the words as Christ delivered them, relating wholly to the Son of Man; that is, God-Man, Christ Jesus. No man but the God-Man, hath either ascended, or descended, in the character and office work of Jehovah's servant, to make known the Being, Perfections, and Love, of Jehovah, in his threefold character of Person, to the Church. It is He, and He only, which lay in the bosom of the Father, hath come forth to declare Him. For though Enoch and Elijah simply as men, had special tokens of divine favor, in being translated to heaven, different from the common mass of the spirits of just men made perfect; yet none but Christ could act in this high capacity, from being God and Man, in one Person, of making known Jehovah. The office was solely and properly his, and no other: Matt 11:27. And hence that question of Christ: John 6:62.

And in respect to the everlasting presence of the Son of Man, as such in heaven; nothing can be plainer, than that it means, his everlasting representation in Covenant engagements there. He hath been so from the first, in the eternal counsel. The expression is similar to what is said, Prov 8:22-31. Christ there, speaking in his wisdom character, saith; The Lord possessed me from the beginning of his ways. I was set up from everlasting. And my delights were with the sons of men. And this was said at a time, not only before the Son of God became incarnate, but before the foundations of the earth were laid. How was he then possessed? And how set up; and his delights with the sons of men? Evidently in the representation of all these grand events, planned and brought forward in the eternal counsel; and to be accomplished in the fulness of time. So that in fact, the things were as good as done, which in Jehovah's mind were determined upon. And in this sense Christ's presence as Son of Man, was everlastingly, in heaven. A similar passage we have, Col 1:15, etc. See John 1:2-3. and observations thereon. As also Poor Man's Commentary on Col 1 etc.--That the passage must be understood in this light, or somewhat like it, is evident from hence. For it cannot refer to the divine nature of the Son of God only; because, as God, he is everywhere present. The Lord filleth all space; and is no more present in heaven than on earth. Neither as man only, would it have been correct. For Christ in his human nature, was at that time conversing with Nicodemus upon the earth. But all difficulties are at once removed, if the expression be considered as speaking of Christ, in his high representing character, the Son of Man; the Head of his body, the Church: for here he evidently becomes that fulness which filleth all in all. Eph 1:22-23.

In respect to the latter of these passages in our Lord's sermon, where Jesus speaks of the lifting up of the serpent in the wilderness; I beg the Reader to attend to the subject with that due regard so beautiful a representation of Christ in the type evidently sets forth. According to my view, it is one of the most blessed shadows of Christ in the Bible; and I have found cause, very often, to thank God the Holy Ghost for it.

For the better apprehension of the subject, I beg the Reader to remark with me, that among the several office-characters of Christ; there were two, more immediately express, and striking. The one was, that He who knew no sin, should be made sin for his people: that they, who knew in themselves no righteousness, should be made the righteousness of God in him. 2 Cor 5:1. And both these the Son of God in our nature, in what is called the fulness of time, undertook to do: and hath done most completely and effectually. But before the accomplishment of Christ's undertaking, that Old Testament saints might not lose this just apprehension of New Testament blessings, the Holy Ghost was pleased to appoint, that these things should be shadowed out, in lively type, and figure. Hence the Scape-Goat was appointed on the day of atonement, to set forth the former, and the Brazen Serpent to manifest the latter: and both directly pointing to the Lord Jesus Christ, and in Him alone, to have their accomplishment. And while the Scape Goat became so very direct and pointed, that no Israelite whose eyes were opened, could overlook Christ, as bearing the sins of his people, the Brazen Serpent, the only creature of God, declared cursed at the fall, was expressly suited to prefigure Him, who bore both the weight, and displeasure, due to the sins of his Church; in the cure of God's broken law, and the indignation which became justly due thereon. And thus the Lord Jesus explains it. As the type was lifted up that the dying Israelite might look with an eye of hope to it, as God's own appointed way, and be healed: so now, the thing signified, even Christ himself which is the sole method of redemption, and appointed by Jehovah is lifted up, that the dying sinner might look to Him with an eye of faith, and be saved. Isa 45:22. I hope that the Reader will be led by the Holy Ghost to enjoy with me the blessedness of this subject, explained as it is to the Church, by the Lord Jesus himself.