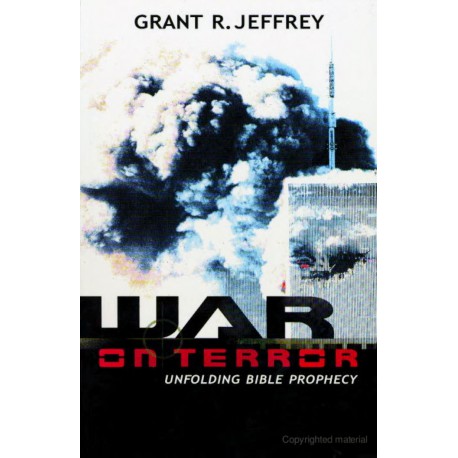 Grant Jeffrey examines the truth "behind the headlines" about the vital struggle against Islamic terrorists that affects all of us.

Best selling author Grant Jeffrey explores the origin and motives of the Islamic terrorists that have declared war against America and the West. Examine the motives and plans of these terror groups and the states that support them. Learn how the powerful western alliance against terror will use our diplomatic, intelligence and military forces to destroy the Islamic terrorists that are trying to destroy our way of life.

War on Terror examines the truth "behind the headlines" about this vital struggle that affects all of us. Learn how the American-led alliance will use our powerful intelligence and military forces to destroy the thousands of terrorists as well as the governments of Iraq, Sudan, and Yemen that support terrorism.

Grant Jeffrey writes.... "Make no mistake. We are at war with international terrorism. While we are naturally concerned with the safety of our family and our nation, we need to realize that our security is in the hands of God."

Key points of the book:

• Documented evidence shows Iraq is behind the terrorist attacks

• The Identity of the Taliban — Pathan tribe — the Ten Lost Tribes

• The War on Terror's impact on the PLO Israel conflict

• Russia's goal — to turn the coalition against Israel

• The need for security versus our privacy and freedom