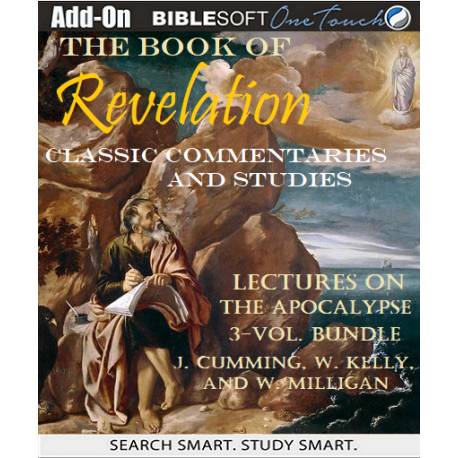 Lectures on the Book of Revelation - 3 volume bundle

A trio of classic commentaries on the Book of Revelation, each produced from a series of lectures, differing in style, scope and interpretive approach.

This is a bundle of three classic commentaries on Revelation, each the product of a series of Lectures on the book, combined to make a continuous Commentary. Each is the work of a distinguished scholar and minister, offering considerable insight and learning, despite following different approaches of interpreting the book.

The lectures by William Kelly (1821-1906), published in 1903, adopt a more standard futurist approach to the book—indeed, Kelly writes specifically against the church-historical mode of interpretation (of Elliot, etc). As such, modern-day readers and students are likely to find his analysis and exposition more familiar. It contains much detailed exegesis, though for the most part the Greek text is dealt with only in the footnotes.

The lectures by William Milligan (1821-1893), published in 1892 (from his Baird Lecture of 1885), take a more critical approach to the text of Revelation, though most of the lectures deal with the book as a whole, rather than on exegesis of individual passages. It thus serves readers more properly as a thorough, criticial Introduction to Revelation; however, chapters 19:11-22:5 are examined in more detail in the final lecture.

Note: This title is also included in our Book of Revelation: Classic Commentaries and Studies Collection 2 and Deluxe 34-volume Collection.