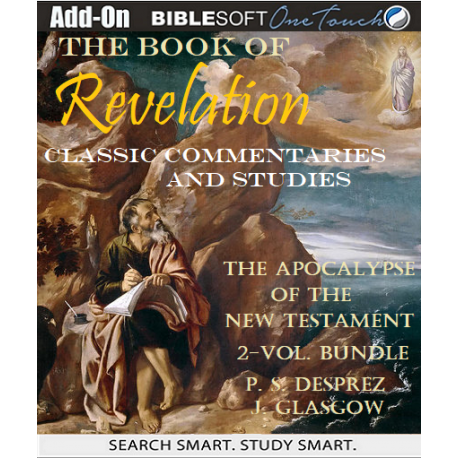 The Apocalypse of the New Testament - 2 volume Commentary bundle

A pair of classic commentaries on the Book of Revelation, written from two different interpretive approaches, but each containing a wealth of critical detail and insight on the text.

This is a pair of classic, but lesser known Commentaries on the book of Revelation, each a work of considerable learning and insight, but taking very different interpretive approaches to the book.

The Apocalypse Translated and Expounded (1872) was written by James Glasgow, who was not a New Testament scholar, but a Professor of Oriental Languages (and member of the Royal Asiatic Society, Bombay) with a special interest in eschatology. As a result, he eluciates aspects of the Hebrew/Semitic background of the book, both in terms of language used (underlying the Greek text) and the imagery of the visions. At the same time, he adopts a fairly tradition church-historical approach to interpreting the book as a whole, viewing the visions as prophetic of different periods of Church history. This makes for a most interesting combination.

The Apocalypse of the New Testament (1870), by Philip S. Desprez, takes a rather different approach looking at the visions of the book of Revelation in terms of their inherent, symbolic meaning, rather than as specific prophecies of future or historical events. This sort of approach is more in keeping with modern-day critical commentators, who tend to focus primarily on how the visions would have been understood by Christians in the late-first century, and what the imagery would have meant to them. At the same time, this symbolic meaning of the visions would apply more or less equally as well to believers in future generations.

Note: This Commentary on Revelation and Outline Bible Study are also included in our Book of Revelation: Classic Commentaries and Studies Collection 2 and Deluxe 34-volume Collection.