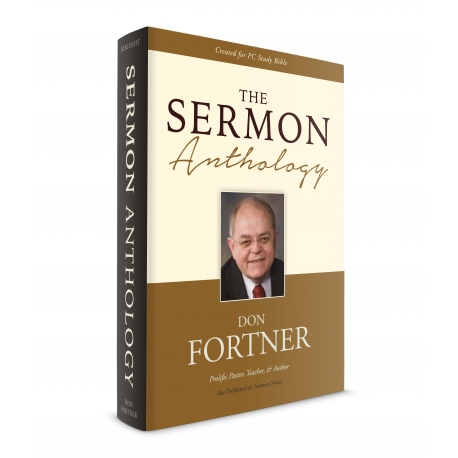 A compilation of more than 2,500 sermons by pastor Don Fortner, spanning years of ministry.

Don Fortner has pastored for decades at Grace Baptist Church. He has preached at conferences and churches around the country and around the world. Biblesoft has compiled an extensive collection of this seasoned pastor's sermons into one gigantic reference work for PC Study Bible.

The Sermon Anthology must rank among one of Fortner's most impressive works to date, compiling 2,827 sermons - spanning years of ministry. The text alone in this work weighs in at over 70 megabytes!

If you are a student of the Bible you will also benefit from this work. The sermon notes are very easy-to-read and are sure to grow your understanding of the Bible. If you are a pastor looking for sermon ideas, you are sure to enjoy Fortner's massive Sermon Anthology and will likely find yourself referencing this work regularly.

These sermon notes are mostly expository in nature. Also included are several full sermon series including:

"WHEN GOD BROKE HIS LONG SILENCE"

Can you imagine what it must have been like to have been a man, faithful, devout, serving God in his appointed place, knowing that no one had heard from heaven in four hundred years, then, suddenly, to have an angel of the Lord to appear to you alone with a word of divine Revelation? That is what we have before us in our text tonight. Our text is Luke 1:5-12. The title of my message is this - WHEN GOD BROKE HIS LONG SILENCE.

Luke 1:5-12  "There was in the days of Herod, the king of Judaea, a certain priest named Zacharias, of the course of Abia: and his wife was of the daughters of Aaron, and her name was Elisabeth. 6 And they were both righteous before God, walking in all the commandments and ordinances of the Lord blameless. 7 And they had no child, because that Elisabeth was barren, and they both were now well stricken in years. 8 And it came to pass, that while he executed the priest's office before God in the order of his course, 9According to the custom of the priest's office, his lot was to burn incense when he went into the temple of the Lord. 10 And the whole multitude of the people were praying without at the time of incense. 11 And there appeared unto him an angel of the Lord standing on the right side of the altar of incense. 12 And when Zacharias saw him, he was troubled, and fear fell upon him."

The first thing recorded in Luke’s gospel is the appearance an angel to one of the ordinary priests in Israel, named Zecharias. The angel announced to this old man that his wife, who was an old woman, well past the age of child-bearing, was, by direct, divine intervention, going to have a son, and that his son would be the forerunner of the long-awaited Messiah.

What a great word of grace! It was too good for this old man to believe. Being a faithful man, Zecharias knew that God had promised four hundred years before this that when Messiah came some man, in the spirit and power of Elijah would go before him to prepare his way before the people (Mal. 3:1).

Malachi 3:1  "Behold, I will send my messenger, and he shall prepare the way before me: and the Lord, whom ye seek, shall suddenly come to his temple, even the messenger of the covenant, whom ye delight in: behold, he shall come, saith the LORD of hosts."

It is, I am sure, impossible for us 2000 years later to grasp what an astounding thing this was. God made the promise four hundred years earlier. Then the heavens were silent. Not another Word was given. Then, suddenly, without any preparatory work, God sent his angel to a certain old man that Daniel’s prophetic weeks were about to be fulfilled. Messiah, the Prince” was about to be revealed (Dan. 9:25). That “seed” of Abraham, in whom all the nations of the earth would be blessed, was about to come (Gen. 22:18). “The Desire of all nations” who would fill the house of God with glory would soon be revealed from heaven (Hag. 2:7).

Though we cannot begin to grasp the awesomeness of this great revelation given to such a man in such circumstances, there are several things in the verses before us to instruct our souls...

Don Fortner has pastored and faithfully declared the gospel of God's free grace in Christ at Grace Baptist Church of Danville Kentucky for nearly 40 years. He is a prolific writer and a popular regular conference speaker in the United States and throughout the world.

He has writen a number of books, many of which are available formatted for PC Study Bible: Discovering Christ in the Old & New Testament, Discovering Christ in All the Scriptures, Discovering Christ Day by Day, Grace for Today, Basic Bible Doctrine, The Attributes of God, The Church of God: What it Means to Belong, The Mysteries of God, Life After Pentecost, Glorious State of God's Saints in Heaven, What Does It Mean to Be Reformed?, and a Collection of Quotes.