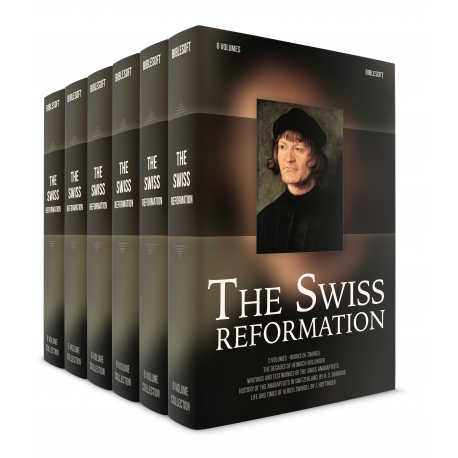 Collection of the writings of Ulrich Zwingli, along with the famous Decades of Bullinger, writings of the Swiss Anabaptists, and other works related to the Reformation in Switzerland and the beginnings of the Reformed Tradition.

Initially, there were two main currents of the Reformation in Europe: one was the Lutheran tradition in north and central Germany, the second was the Reformed tradition in Switzerland. For centuries, the Swiss republic had fought to preserve its territory and identity against the princely families of the German empire; this fierce sense of nationalism and independence would characterize the Reformation in Switzerland as well. Ulrich Zwingli was the leading figure -- as chief pastor at Zurich, he took center stage in the conflicts and disputations. He was a formidable scholar and incisive commentator on the Bible; and no mean statesman either. He died prematurely, as a chaplain during the famous battle of Cappel. We offer two volumes of his works, including most of the essential writings -- treatises, letters, and expository works. The Commentary on True and False Religion is perhaps his greatest work, and a true classic of the period. Also included is Joseph Hottinger's Life and Times of Ulrich Zwingli.

Zwingli's successor at Zurich was Heinrich Bullinger, whose played a prominent role (alongside John Calvin), in establishing the doctrinal standards of the Reformed Churches. Bullinger was especially influential and revered among the English Reformers. His Decades -- a collection of 50 sermons, expanded and arranged into a kind of systematic theology -- was, for a time, the chief theological textbook in England, achieving a greater popularity even than Calvin's Institutes.

The Anabaptists were also an important, if somewhat forgotten, part of the Swiss Reformation. Many died young (some in prison or at the stake), persecuted by both Catholics and fellow-Protestants. From Switzerland and southern Germany, the movement spread north and east, encountering persecution at almost every turn. We offer a selection of their writings, along with historical articles and documentation, as well as a History of the Anabaptists in Switzerland, by H. S. Burrage.

Works of the Swiss Reformation, Volume 1: Select Treatises and Letters of Ulrich Zwingli

[from a Sermon delivered at the famous Marburg Colloquy]

Works of the Swiss Reformation, Volume 3: The Decades of Heinrich Bullinger [SwissRf3]
Bullinger's most famous work: 50 Sermons -- five sets of 10  sermons (hence 'Decades'), organized as a manual for theological instruction. It proved immensely popular and influential in England, for a time even surpassing Calvin's Institutes as a theological text-book. The sermons in the first two volumes are relatively short, those in the last three volumes are often quite lengthy, with frequent and extensive patristic citations. The Decades are organized as follows:

There are two separate Dedications to King Edward VI., and a Biographical Notice on Bullinger is prefixed.

This, of course, is the Parker Society edition, with nearly complete textual footnotes provided

Works of the Swiss Reformation, Volume 4: Writings and Documents of Swiss Anabaptism

[Hetzer was a gifted scholar and translator; his translation of the Hebrew Prophets was well-regarded, even by his enemies]

History of the Anabaptists in Switzerland, by Henry S. Burrage
A readable history, which covers much the same ground as the Swiss Anabaptism volume, but presented in a continuous historical narrative.

Life and Times of Ulrich Zwingli, by J. Hottinger 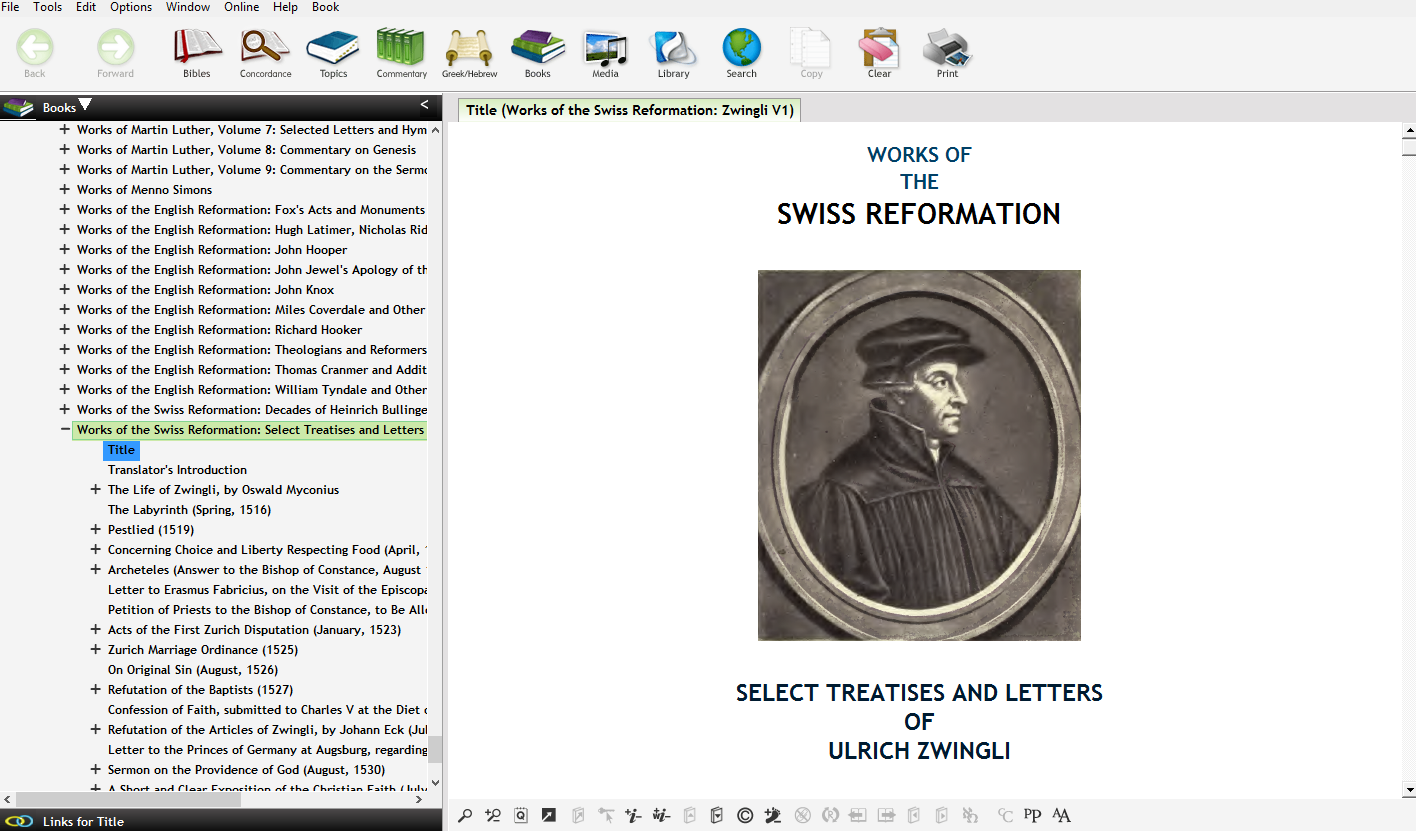 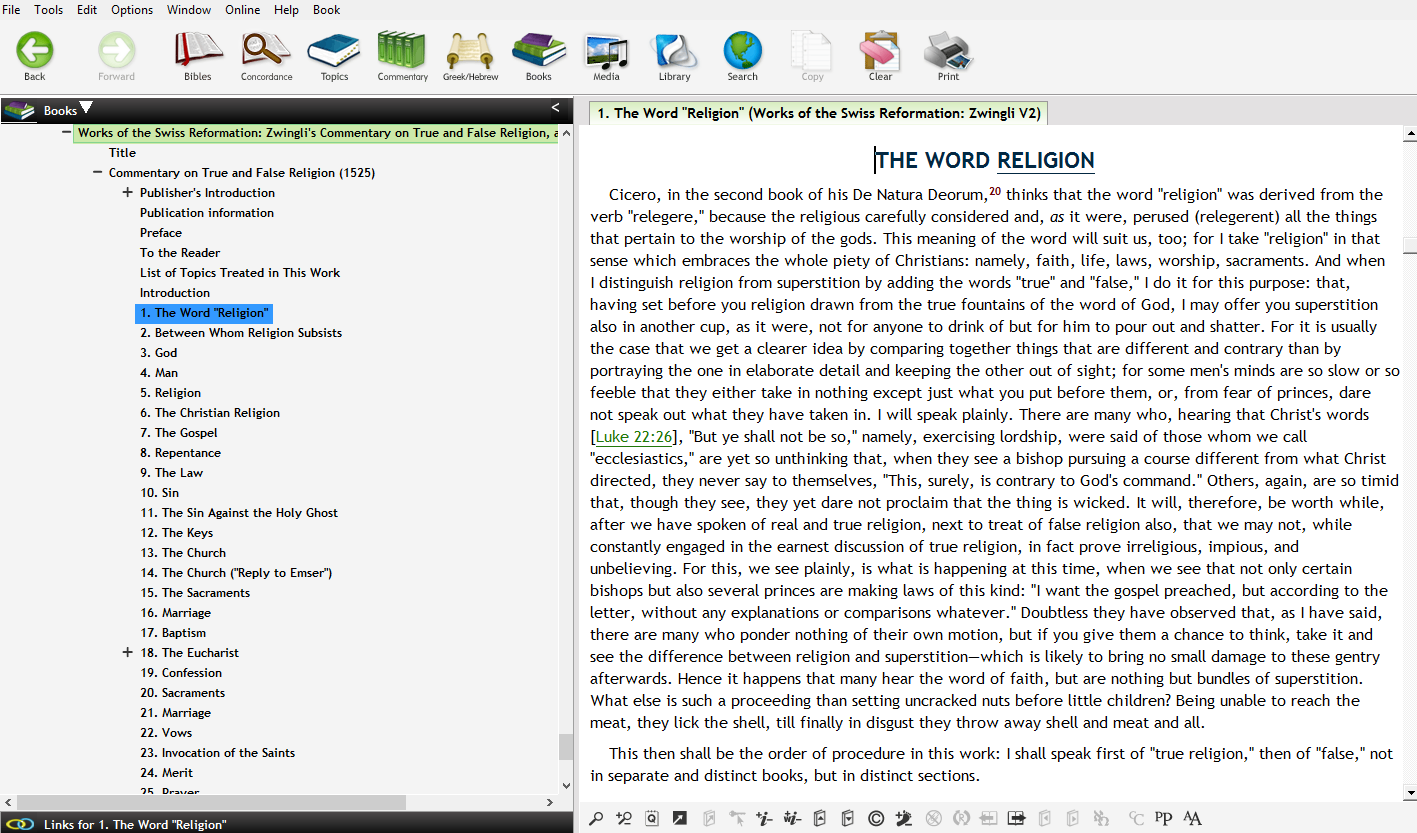 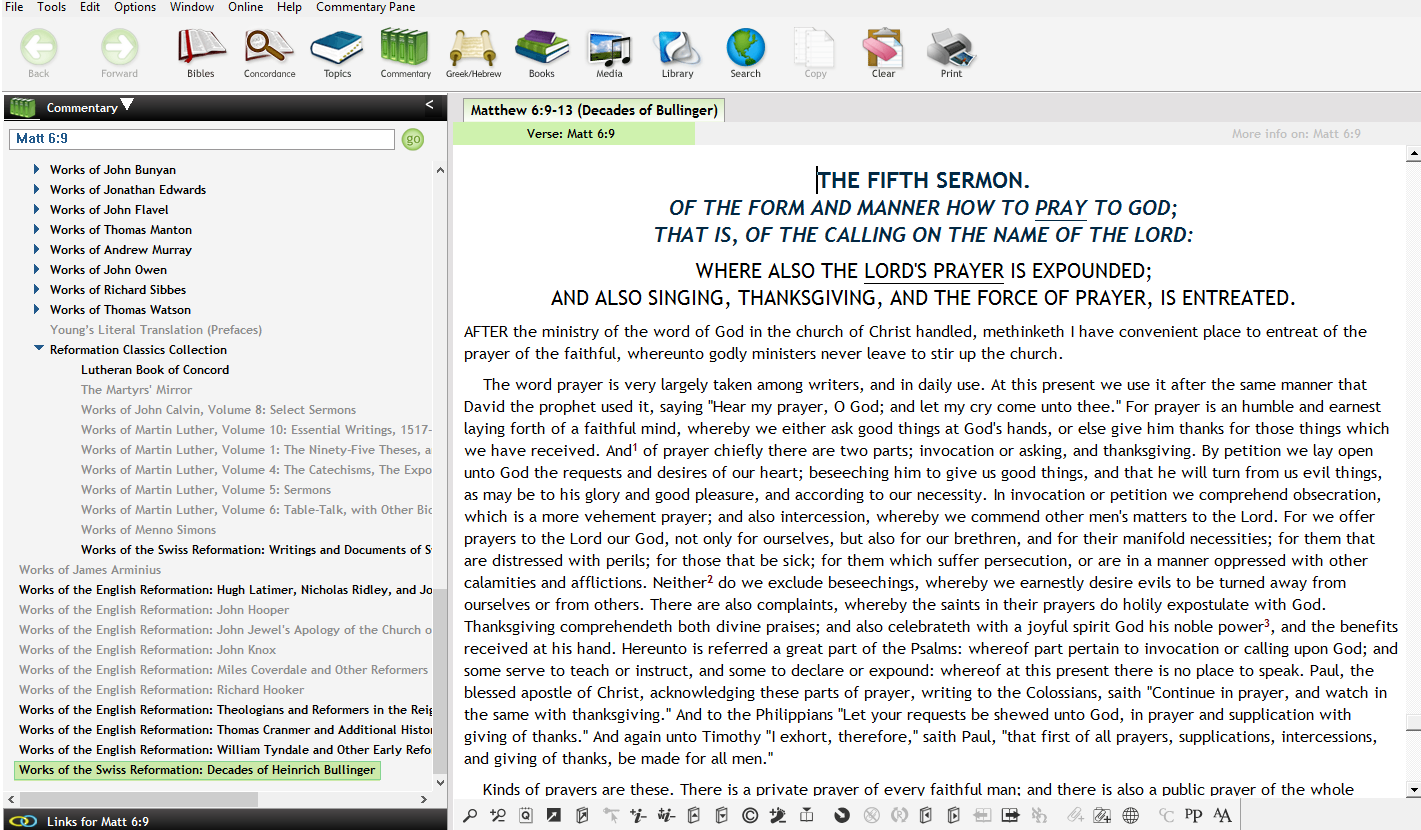 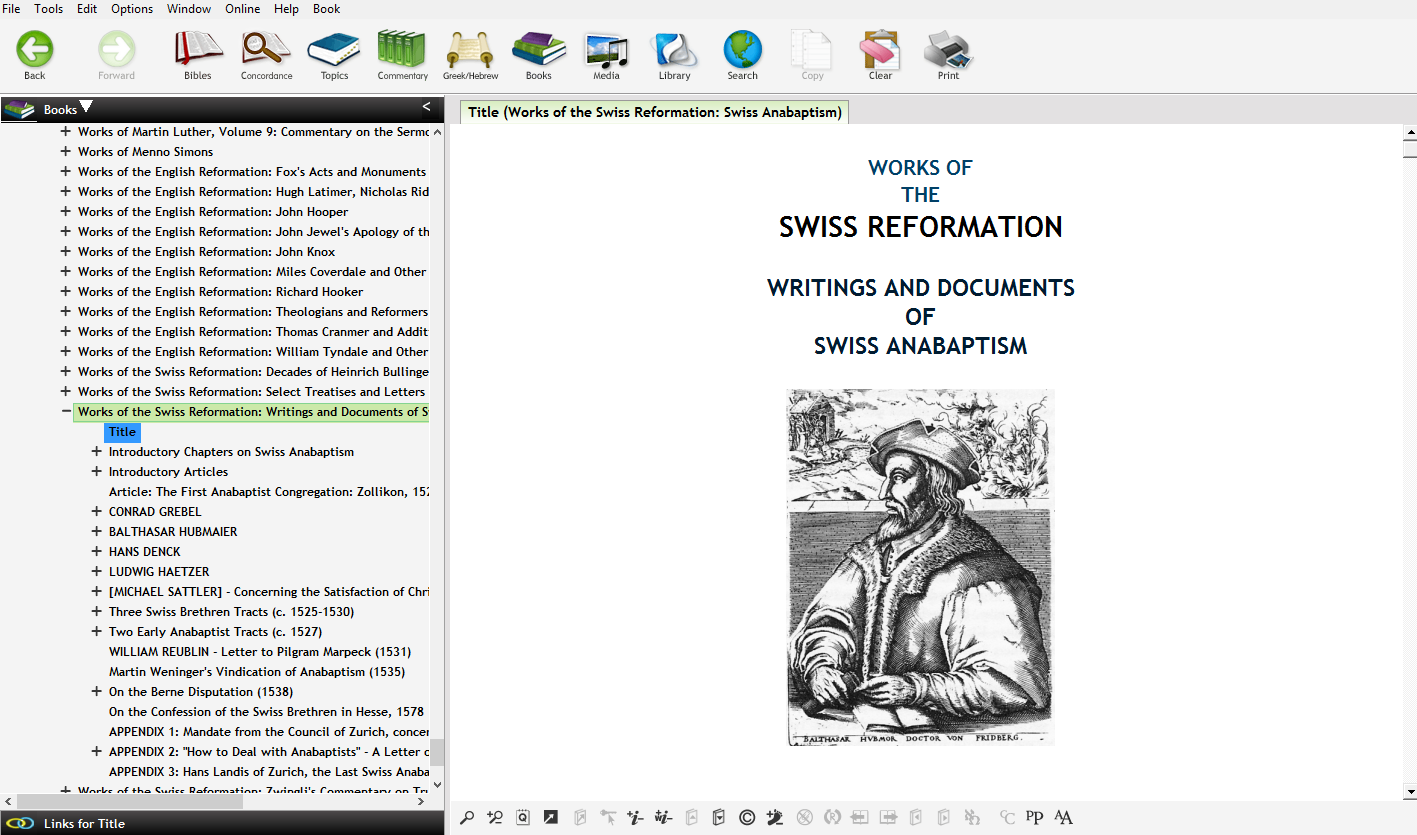 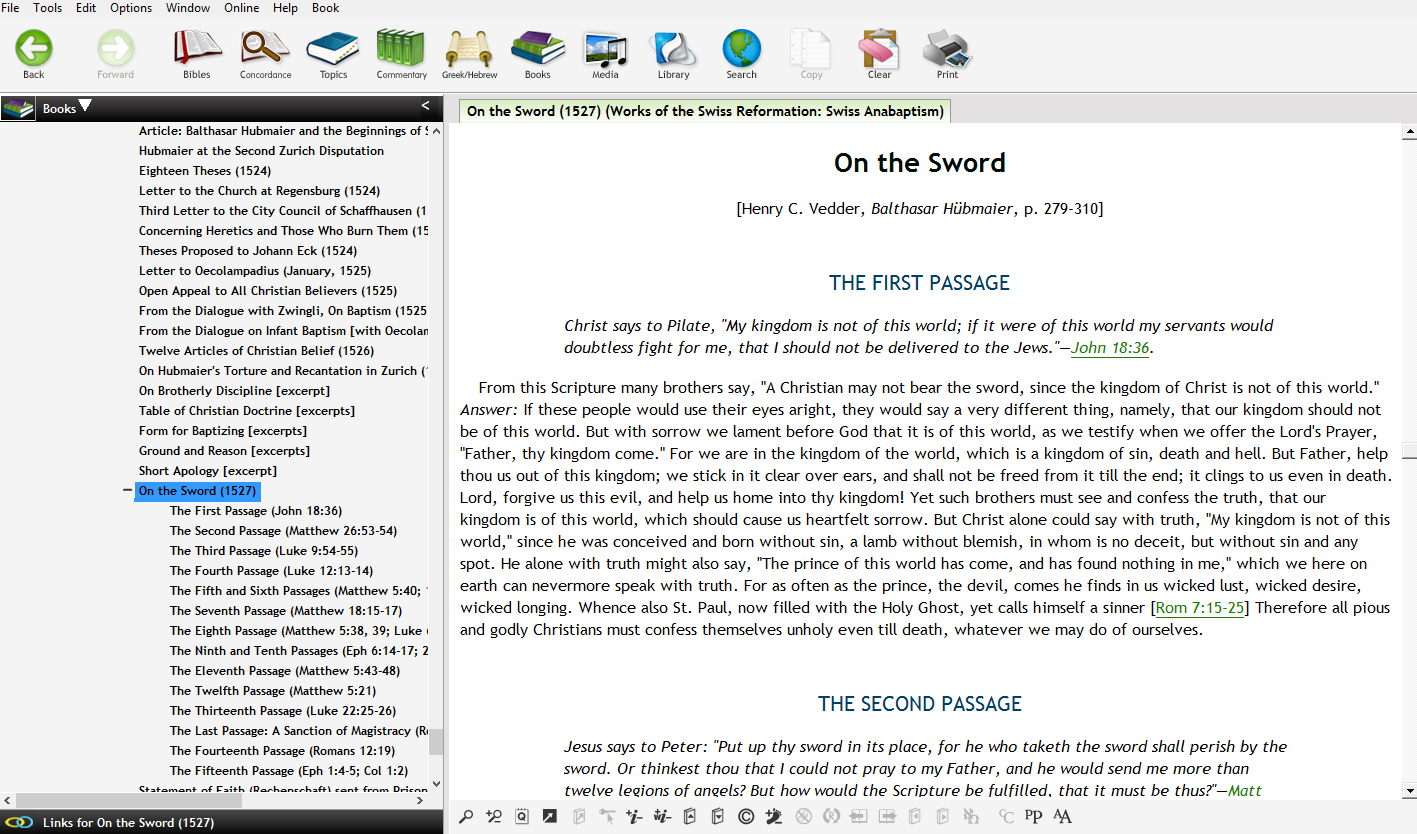 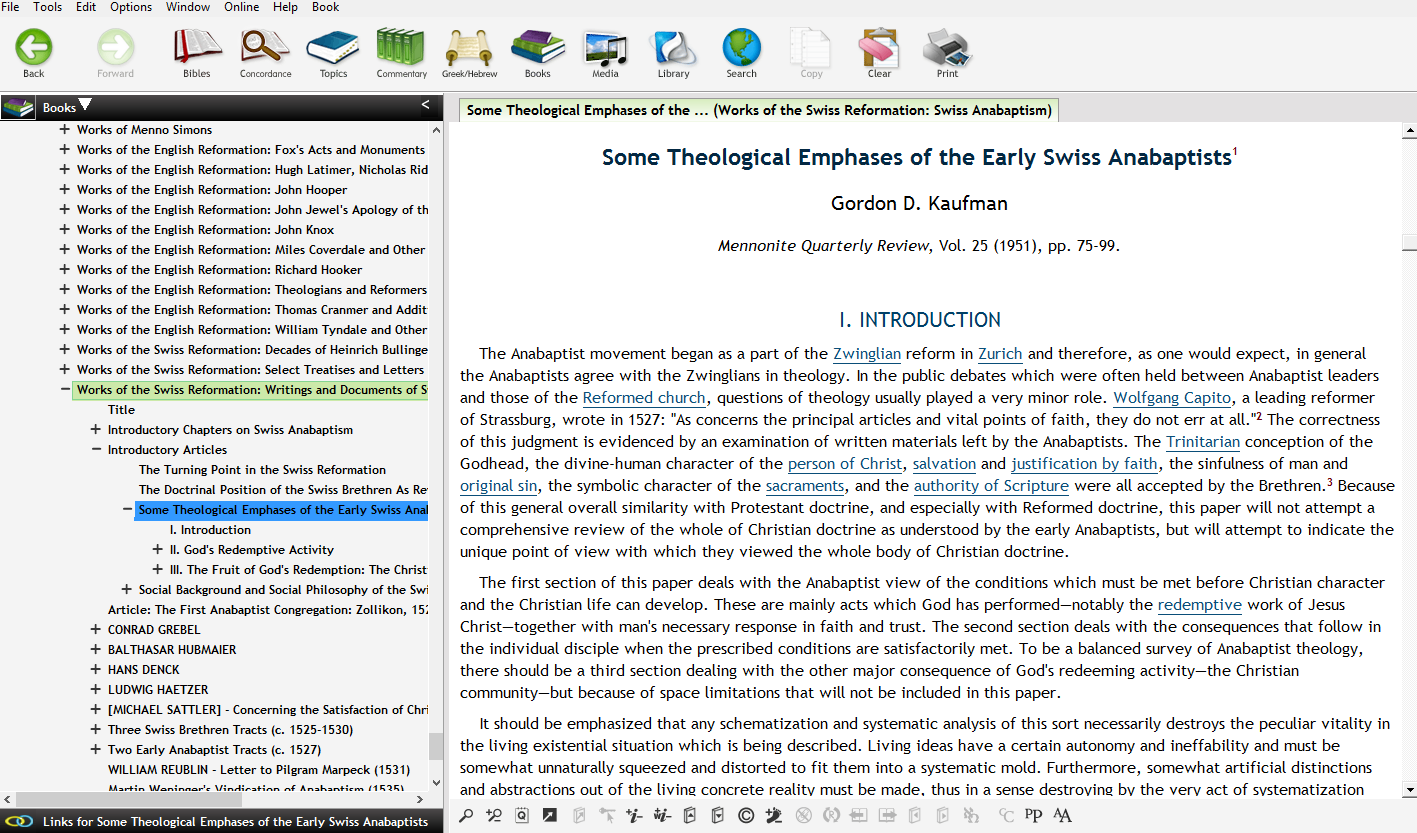 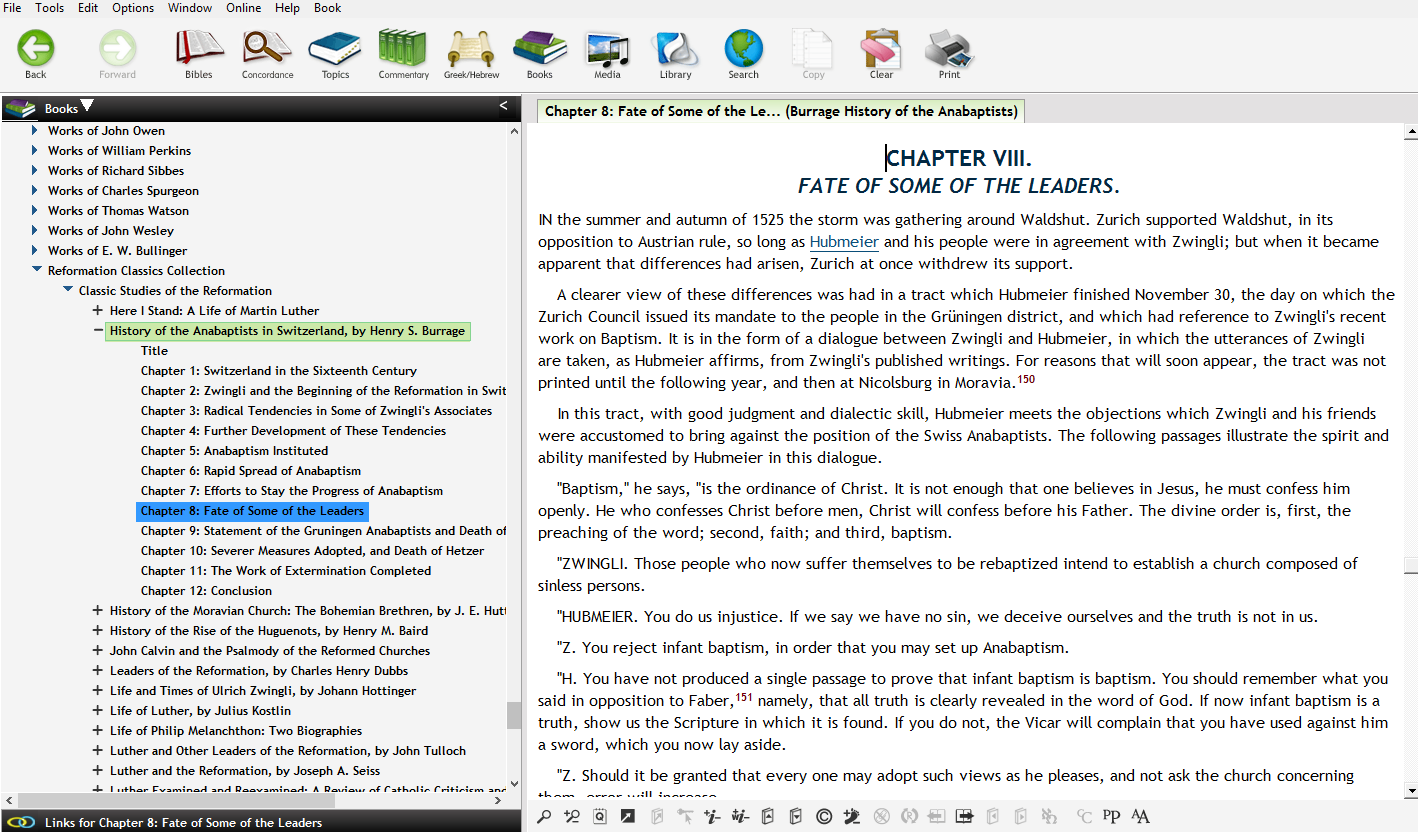