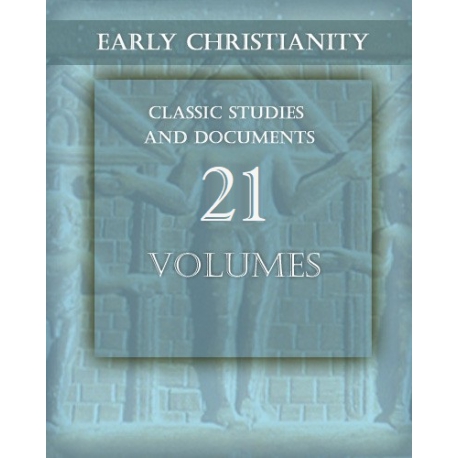 Biblesoft's Early Christianity Collection—Classic Studies and Documents is a companion collection to the both the Early Church Fathers and Classic New Testament Studies sets.

Biblesoft's Early Christianity Collection — Classic Studies and Documents is a companion collection to the Classic New Testament Studies Collection (sold separately or as a combined bundle).The Early Christianity Collection is vital for the works it offers on the development of theology and biblical interpretation during the early church period by its founding fathers. See the descriptions below for specifics on how each work will increase your ability to study the origins of Christian theology as it developed through various schools of thought and councils — and is now passed down to inform and inspire today's interpreters and commentators.

NOTE: This collection was previously advertised as containing 14 volumes—it actually is made up of 21 print volumes.

Titles in this Collection are:

Also featured are five works by pioneering theologian and historian of the Early Church, Adolf von Harnack (also available as part of the Harnack Collection):

Harnack's influential Dogmengeschichte (History of Dogma, 6 vol. English ed.), a landmark work that is still regularly consulted and cited by historians and theologians. Harnack was almost universally regarded as the leading expert on early Church History and Doctrine, especially for the ante-Nicene period. His ground-breaking work helped establish more serious critical study of the early Christianity and the Fathers. [Scholarly, with extensive documentation], [1894 Engl. Ed., transl. from the German]

Mission and Expansion of Christianity in the First Three Centuries

This work on early Christian history is somewhat more approachable and easier to follow than Harnack's great work on Dogma, though it still is quite scholarly, especially in the footnotes. It focuses on the social, intellectual and ethical contours of the early church, largely in regard to the Greco-Roman cultural environment [Scholarly, with extensive documentation], [c. 1902; 1908 Engl. Ed., transl. from the German]


A series of lectures given extempore at the University of Berlin, Winter 1899-1900, covering the history and development of doctrine, as well as the social and intellectual structure of Christianity. The bulk of the lectures focus on the Apostolic and Early Church period, but the last few extend in to the Medieval and Reformation periods. Before plunging into the author's History of Dogma. These lectures provide a good introduction to the framework and approach used in analyzing and organizing the material used in von Harnack's History of Dogma volumes. [General academic, minimal documentation], [1900; 1908 Engl. Ed., transl. from the German]

Two Lectures: On Monasticism and the Confessions of Augustine


Two short works - lectures, or treatises, less academic in approach than many of Harnack's more famous works. His treatment of 'Monasticism: It's Ideals and History' provides a useful survey; of course, coming out of the rational Protestantanism of the 18th & 19th centuries, he has little sympathy for the ascetic ideals of monasticism, but his objective knowledge of the material is sound. The Augustine lecture, much shorter and is a helpful introduction or supplement to the reading of Augustine and his famous autobiography. [General academic, minimal documentation], [c. 1900; 1911 Engl. Ed., transl. from the German]

On the Apostles' Creed

29 other products in the same category: