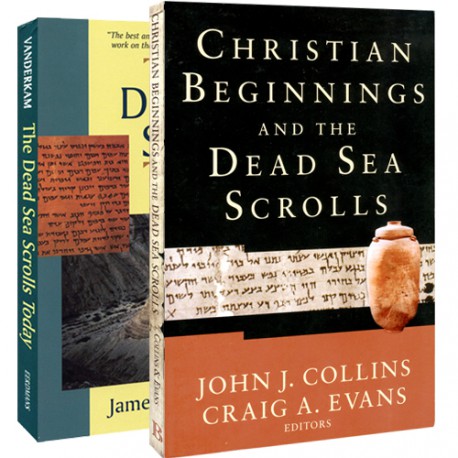 This two-volume set covers the discovery of the Dead Sea Scrolls, their contribution to the understanding of the text and canon of Scripture, and Judean history from 150 BCE to 70 CE.

This two-volume set covers the discovery of the Dead Sea Scrolls, their contribution to the understanding of the text and canon of Scripture, and Judean history from 150 BCE to 70 CE. It’s an overview that will strengthen your knowledge of the great care in which God’s Inspired Word has been protected as it has been passed through the eras of time.

For example, Craig A. Evans examines three typologies used in New Testament and Qumran literature that were invoked to describe the restoration of Israel: “a wilderness typology, a water immersion typology, and a typology of the number twelve.” Evans’s discussion of these typologies concludes that the “very structure of the early Christian community … cannot be adequately understood without a careful and nuanced appreciation of the Dead Sea Scrolls.”

In The Dead Sea Scrolls Today, preeminent scroll researcher James C. VanderKam offers an up-to-date guide to all the scrolls—published and still unpublished—discussing what they tell us about the community associated with them and what importance they hold for biblical studies.

In the last few years much has happened in connection with the Dead Sea Scrolls. International controversy has erupted over the lack of access to the unpublished scrolls, while a renewed effort has been made to finish the large task of editing the remaining texts from the fourth cave—the richest repository of writings—in which 15,000 fragments have been found representing more than 500 texts. These events have unleashed a flurry of discussion and new theories about the scrolls.
The chapters cover the major subjects of scroll studies: the discoveries of the manuscripts and nearby archaeological remains during the 1940s and 1950s, as well as:

“…Here is a clear, readable, balanced introduction, which takes into account the full spectrum of scholarship and puts maverick theories in perspective. The reader will not find a more reliable guide through the swirl of controversy.”
John J. Collins, Yale University

NOTE: both of these titles are included in the OneTouch Professional Series.