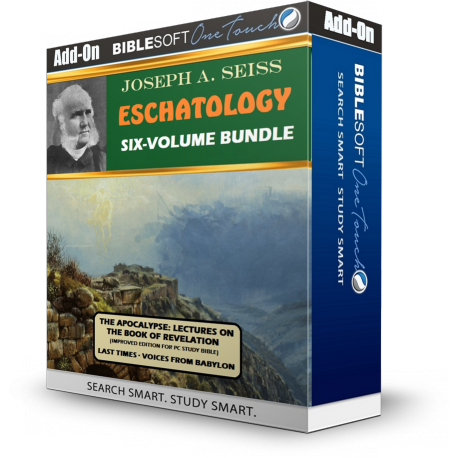 A six-volume collection of works by Joseph A. Seiss, including a new and improved edition of his famous Apocalypse: Lectures on the Revelation, and his commentary on the book of Daniel (Voices from Babylon).

Joseph Augustus Seiss (1823-1904) was a distinguished American Lutheran minister, who founded the Church of the Holy Communion, Philadelphia, in 1874, and was a leading figure of the General Council of the Evangelical Lutheran Church in North America. A prolific author, Seiss served as editor of The Lutheran and The Lutheran and Missionary (1860-79), and published many books in different areas, but today is best known for his eschatological writings. His interest in eschatology was shown by his work as editor of The Prophetic Times (1863-75), but his lasting fame was established with his Commentary on the book of Revelation—Lectures on the Apocalypse, 3 volumes, originally published 1970-84. Biblesoft has long had this classic work available for PC Study Bible (as "Seiss' Apocalypse"). This is a new and improved electronic edition (from the sixth/eighth print editions, 1900-1), which more accurately represents the printed text, including the all aspects of display, footnotes, as well as the subject index for all three volumes, linked by page number. If you already have our earlier version, you will not lose it; instead this new edition will be accessible as a second version, display under book the Commentary and Book/Commentaries menu categories as "The Apocalypse: Lectures on the Revelation of Jesus Christ, by Joseph A. Seiss".

This collection offers two other works by Seiss with an eschatological orientation:

As an extra BONUS, we also include the authors The Gospel in Leviticus, or Holy Types: A Series of Lectures on the Hebrew Ritual.

NOTE: The new edition of The Apocalypse is also  included in our Book of Revelation: Classic Commentaries and Studies Collection 1 and Deluxe 34-volume Collection.

Menu Access: The Apocalypse is accessible from the main Commentary menu and under Books/Commentaries. The other titles can be accessed by Bible verse under "Additional Commentary Material" in the Commentary menu. Last Times can be found in the Books menu under "Classic Studies on Eschatology", and all titles in this collection under "Works of Joseph A. Seiss".