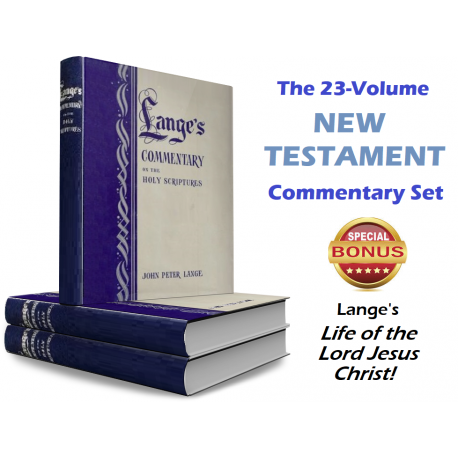 Lange's New Testament Commentaties and Life of the Lord Jesus

A value-priced combination of Lange's New Testament Commentaries and The Life of the Lord Jesus Christ.
(Take an extra 25% off the sale price with the code SPRING25 at checkout.)

A bundled product featuring Lange's New Testament Commentaries, together with The Life of the Lord Jesus Christ, by Lange and Marcus Dods. Each are also available for purchase separately.

Biblesoft is pleased to offer Lange's New Testament Commentaries for PC Study Bible now for the first time! These are the 23 New Testament volumes (with an Index volume). Originally bound together in a ten-volume print set, we have utilized the 23-volume division indicated by the actual page numbering, making the material easier to access (by individual book).

These Commentaries, long valued by scholars and pastors alike, are primarily the work of Johann Peter (J. P.) Lange (1802-1884), a leading German theologian, Reformed minister and Biblical scholar who succeeded Isaac Dorner as professor of Dogmatic Theology at Bonn in 1854. His oversight and contributions resulted in the Theologisch-homiletisches Bibelwerk (1857-76), edited and published in English as A Commentary on the Holy Scriptures, Critical, Doctrinal, and Homiletical (1865-80) [and forever to be known as "Lange's Commentary"]. The Anglo-American edition was overseen by the distinguished and popular historian-scholar Philip Schaff, who did much of the translation and editing work.

In contrast to the extreme skeptical-critical mode which came to characterize much of German scholarship in the 19th century, Lange represented a more traditional-conservative (and Evanglical) approach, shared in common with men such as E. W. Hengstenberg. He was also a (Reformed) minister, and the Commentaries reflect this combination of conservative criticism, Evangelical theology, and homiletics, in a way that is unique. For each passage that is covered, a consistent approach is adopted throughout. After giving the text in translation, along with textual notes, (as footnotes), three different kinds of commentary are presented:

This gives you three times the value! For each verse you select, a drop-down box will appear allowing you to choose from each of these areas or kinds of commentary. For detailed analysis, go to the exegetical-critical notes; for sermon ideas and pastoral insights, select the Homiletical notes.

Lange's Commentaries are available in a number of places online, but typically in a poor or incomplete form. Biblesoft's electronic edition is vastly superior to anything you will find online, and is perhaps the finest version available anywhere. In addition to its integration within the Commentary interface of PC Study Bible, considerable work has been done to preserve an accurate division and outline for each volume if you choose to access it by table of contents. The Index volume allows you to follow-up on specific subjects (by page number). Also, in addition to the Bible verses, references to the writings of Josephus, Philo, the Church Fathers, and the Pseudepigrapha are linked wherever possible.

All told, Lange's Commentaries represent a ground-breaking and lasting achievement—being among the most reliable (and largest) Commentary sets ever produced. It is a compendium of conservative/Evangelical German scholarship of the period, with contributions by scholars such as J. J. van Oosterzee (Luke, 1-2 Timothy, Titus, Philemon, James), Gotthard Lechler (Acts), Christian Friedrich Kling (1 and 2 Corinthians), Otto Schmoller (Galatians), Karl Braune (Ephesians, Philippians, Colossians, 1-3 John), C. A. Auberlen (Thessalonians), C. J. Riggenbach (Thessalonians), Carl Bernhard Moll (Hebrews), G. F. C. Fronmüller (1-2 Peter, Jude), and, of course, Lange himself (Matthew, Mark, John, Romans, James, Revelation). Many consider the Anglo-American edition even to be an improvement on the original, with the inclusion of numerous additional notes and comments (indicated by square brackets []) by the editors & translators, distinguished (American) scholars in their own right—Philip Schaff, W. G. T. Shedd, Charles F. Schaeffer, J. Isidore Mombert, M. B. Riddle, and others.

We hope you will take the opportunity to add this valuable (and long-awaited) classic New Testament Commentary set to your library today!

(NOTE: The Old Testament volumes will be made available separately)

THE LIFE OF THE LORD JESUS CHRIST

At least as influential and popular in its day was his Das Leben Jesu ("The Life of Jesus", 1844–1847), largely written in response to the work of David Friedrich Strauss. It was translated into English and edited/revised by Marcus Dods with the title "The Life of the Lord Jesus Christ", published first in a six-volume edition (1864) and subsequently reprinted in a four-volume set (1872). This electronic version is taken from the latter. It is the complete work, including footnotes and a helpful word/subject Index.

The Life of the Lord Jesus Christ by Lange (and Dods) is truly one of those seminal works which belongs in the library of every pastor and student of the New Testament. It is written in much the same tone and spirit as the Commentaries, blending Biblical criticism and exegesis with the homiletic approach of the pastor. The works of other scholars and theologians are referenced and commented upon, but never in such a way as to detract from the main flow and point of the study.

Biblesoft's version of this great work functions as a full-fledged New Testament Commentary, with nearly every passage or verse in the Gospels (along with others in the New Testament) accessible under the Commentary menu. You will also find it located under "Classic New Testament Studies" in the Books menu.