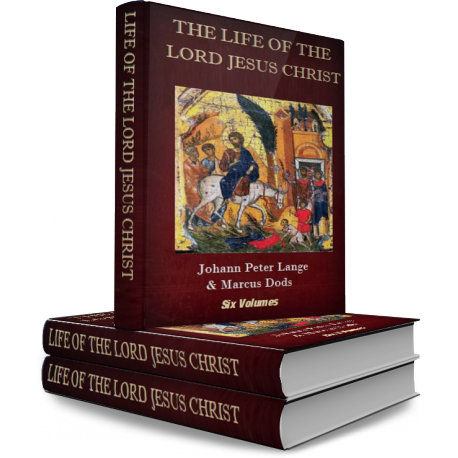 The Life of the Lord Jesus Christ

J. P. Lange's classic study of Christ and the Gospels, a landmark critical treatment of the Life of Jesus, written as a traditional-conservative response to the more skeptical German scholarship of the period.

Biblesoft is pleased to offer Johann Peter (J. P.) Lange's classic critical and homiletic study of Christ and the Gospels in electronic format for PC Study Bible. Lange (1802-1884) was a leading German theologian, Reformed minister and Biblical scholar who succeeded Isaac Dorner as professor of Dogmatic Theology at Bonn in 1854. In contrast to the extreme skeptical-critical mode which came to characterize much of German scholarship in the 19th century, Lange represented a more traditional-conservative (and Evanglical) approach, shared in common with men such as E. W. Hengstenberg. Best known today for his oversight and contributions to the Theologisch-homiletisches Bibelwerk (1857-76), edited and published in English as A Commentary on the Holy Scriptures, Critical, Doctrinal, and Homiletical (1865-80) [and forever to be known as "Lange's Commentary"], at least as influential and popular in its day was his Das Leben Jesu ("The Life of Jesus", 1844–1847), largely written in response to the work of David Friedrich Strauss. It was translated into English and edited/revised by Marcus Dods with the title "The Life of the Lord Jesus Christ", published first in a six-volume edition (1864) and subsequently reprinted in a four-volume set (1872). This electronic version is taken from the latter. It is the complete work, including footnotes and a helpful word/subject Index.

The Life of the Lord Jesus Christ by Lange (and Dods) is truly one of those seminal works which belongs in the library of every pastor and student of the New Testament. It is written in much the same tone and spirit as the Commentaries, blending Biblical criticism and exegesis with the homiletic approach of the pastor. The works of other scholars and theologians are referenced and commented upon, but never in such a way as to detract from the main flow and point of the study.

Biblesoft's version of this great work functions as a full-fledged New Testament Commentary, with nearly every passage or verse in the Gospels (along with others in the New Testament) accessible under the Commentary menu. You will also find it located under "Classic New Testament Studies" in the Books menu.

Note: This title is also available bundled with Lange's NT Commentaries, or as part of the Life and Person of Christ Study Package.