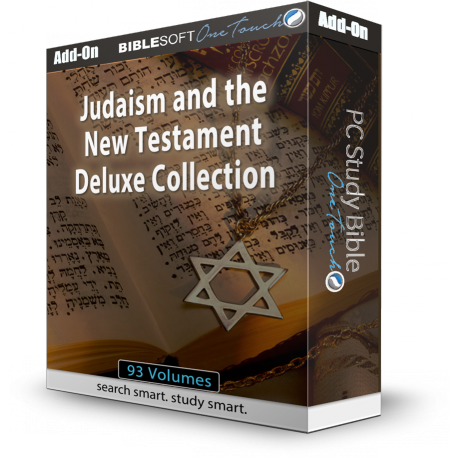 Biblesoft's deluxe collection—more than 90 volumes of resources to help you study the Jewish background of the New Testament!

This Biblesoft's new DELUXE Judaism and the New Testament Collection, containing a vast number of resources (more than 80 volumes in print) to enable you to study the backround of the New Testament as never before! Due to the publication of the Dead Sea Scrolls, along with many other recent discoveries, scholars and commentators on the New Testament have increasingly been emphasizing and exploring various aspects of its Jewish backround—as related to Jesus himself, the earliest disciples and Christians (such as the apostle Paul), and virtually all of the New Testament writings. One cannot properly understand the New Testament and its message without some understanding of Jewish religion, culture and thought of the period (i.e. the first centuries B.C.-A.D.). This new collection will give you an unprecedented opportunity to study this important aspect of the Scriptures! At the center is our core 19-volume Judaism and the NT Collection (also available for purchase separately):

To these titles have been added the following studies and writings on Judaism (available separately as our Introduction to Judaism collection [20 volumes]):

Along with this original compilation of classic Jewish writings and extracts (available separately as our Jewish Classics Collection [est. 35 volumes]):

As a featured bonus, the collection has Emil Schürer's landmark study A History of the Jewish People in the Time of Jesus Christ, translation of the 2nd revised edition (5 volumes, 1891; also available for separate purchase), and two other titles—The Literature of the Old Testament, by George Foot Moore, and Introduction to the Pseudepigrapha, by William J. Deane.

Finally, to give a modern perspective to the subject, we have added our Messianic Collection (also available separately), including four titles from Messianic Jewish Publishers:

And one last bonus title: Christian Beginnings and the Dead Sea Scrolls, by Craig A. Evans, etc.