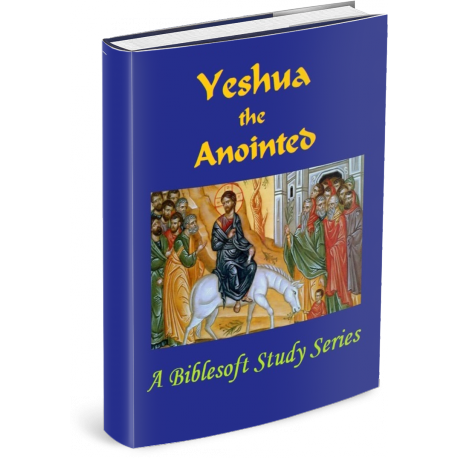 An original Bible Study Series produced for Biblesoft, offering a unique and engaging in-depth study of the Scriptures.

This Bible Study Series was produced and created especially by Biblesoft, for use in the PC Study Bible and OneTouch programs. It has been taken from articles and notes written for our Bible Study Blog, and been adapted for use as an electronic reference work. Originally created for Easter season 2018, it is divided into 16 separate studies, and can be used as a monthly or seasonal Bible study course. Each study provides in-depth analysis of the Greek (or Hebrew) text of Scripture, along with an extensive examination of the historical and culture background, questions of interpretation, and more!

This particular series deals with the title "Anointed One" (Messiah/Christ) given to Jesus by the earliest Christians, to the point that it functioned as a second name—Yeshua the Anointed (i.e. Jesus Christ). The studies in this series provide an in-depth examination of the meaning and background of the title as it would have been understood by Jews and Christians in Jesus' own time. The evidence from Jewish literature—especially the Dead Sea Scrolls from Qumran—along with every relevant passage from the Old and New Testament are carefully presented and discussed. In addition, we have included an extensive series of daily notes (also from the Study Blog last Easter season) dealing with important title "Son of Man" as used by Jesus in the Gospels of Luke and John.

Both the Study series and the additional notes function as a Commentary in the program, and can be accessed by verse directly under the Commentary menu.

We hope that you will find these studies to be rewarding, provocative, and inspiring!

NOTE: This series is also included in the Jesus and the Gospels Biblesoft Study Series Collection.

17 other products in the same category: