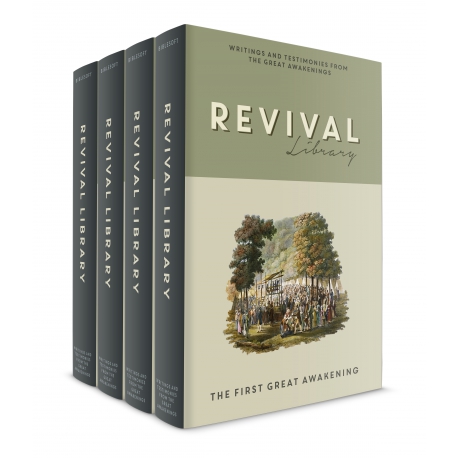 Revival Library: Writings and Testimonies from the Great Awakenings

"[Revival is] the return of the Church from her backslidings, and the conversion of sinners."
Charles Finney

The Revival Library 4-volume Collection contains spirit-stirring writings from leaders on the frontlines of some of the greatest revivals. This robust collection includes over 8,000 pages of sermons, biographies, histories, and other writings directly from the leaders of these popular movements. Their passion and heart for God that helped form these Great Awakenings continue to inspire and challenge Christians today.

These 68 titles cover these Awakenings between 1727-1900's. From John Edwards to John Wesley, these writings provide insight into the heart and mind of those on the forefront of historic revivals. In addition, we have included a Topical Index to help you browse these incredible works via meaningful topics inPC Study Bible. The added value of linked Bible verses and topic links make these works a significant contribution to your library.

As an added bonus, we are including the Expository Writings of C.H. Mackintosh!

Included in this 4-Volume collection:

Introduction to the First Worldwide Awakening of 1725

The Early Life of Howell Harris, by Richard Bennett

The Awakening in Pennsylvania, by Samual Blair

A Faithful Narrative of the Surprising Work of God, by Jonathan Edwards

Some Thoughts Concerning the Present Revival of Religion, by Jonathan Edwards

The Life and Diary of the Rev. David Brainerd, by Jonathan Edwards

The Cambuslang Revival, by Arthur Fawcett

A History of the Moravian Church, by J. E. Hutton (4 Vols)

Lady Huntington and Her Friends, by Mrs. Helen C. Knight

The Revivals of the Eighteenth Century, by Rev. D. Macfarlan

The Journal of Mr. John Nelson

The Revival of Religion in England in the Eighteenth Century, by John S. Simeon

The Journal of John Wesley

Accounts of Religious Revivals in Many Parts of the United States from 1815-1818, by Joshua Bradley

Methodist in Earnest, by James Caughey

Life in Hawaii: An Autobiographic Sketch of Mission Life and Labors, by Titus Coan

An Autobiography by Charles G. Finney

Pentecostal Dynamite: From the Life of Benjamin Abbott, by M. J. Knapp

The Kentucky Revival, by Richard McNemar

A Brief Account of the Late Revivals of Religion, by Various Authors

1830-1903: Awakenings and Revivals in America and the British Empire

Narrative of the Great Revival Which Prevailed in the Southern Armies, by William W. Bennett

Revivals: A Lecture, by William Brock

The 1860 Revival in Jamaica, by Tony Cauchi

The Life and Work of Dwight Lyman Moody, by Rev. J. Wilbur Chapman

Bringing in Sheaves, by Rev. A. H. Earle

The American Revivals: A Lecture, by B. Evans, D.D.

The Year of Grace: A History of the Ulster Revival of 1859, by William Gibson

The Ulster Revival of 1859, by William Henry Harding

From Death Unto Life, by William Haslam

The Welsh Revival (1859): It's Origin and Development, by Thomas Phillips

Visitations of Grace, by B. J. Poole-Connor

The Power of Prayer, by Samuel I. Prime

Gipsy Smith: His Life and Work

Living Echoes of the Welsh Revival 1904-5, by Robert Ellis

The Story of the Welsh Revival, by Arthur Goodrich, G. Campbell Morgan, etc.

With Christ Among the Miners: Incidents and Impressions of the Welsh Revival, by Howell Elvet Lewis

I Saw the Welsh Revival, by David Matthews

The Welsh Religious Revival: A Retrospect and a Criticism, by J. Vyrnwy Morgan, D.D.

The Awakening in Wales, and Some of the Hidden Springs, by Mrs. Jessie Penn-Lewis

Evan Roberts: The Great Welsh Revivalist and His Work, by D. M. Phillips

Evan Roberts: His Life and Work, by J. Tudor Rees

The Revival in the Khasia Hills, by Mrs. John Roberts

The Great Revival in Wales, by Rev. S. B. Shaw

The Revival in the West: A Narrative of Facts, by William T. Stead 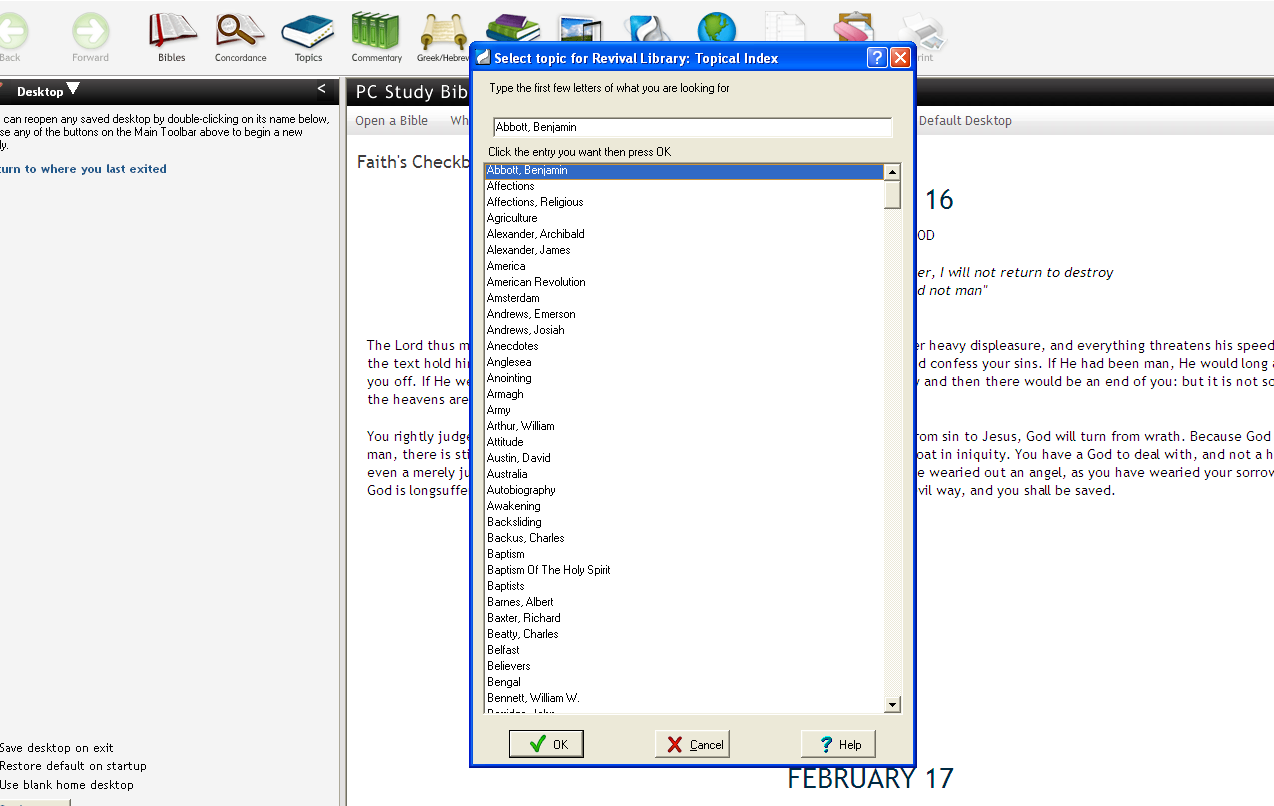 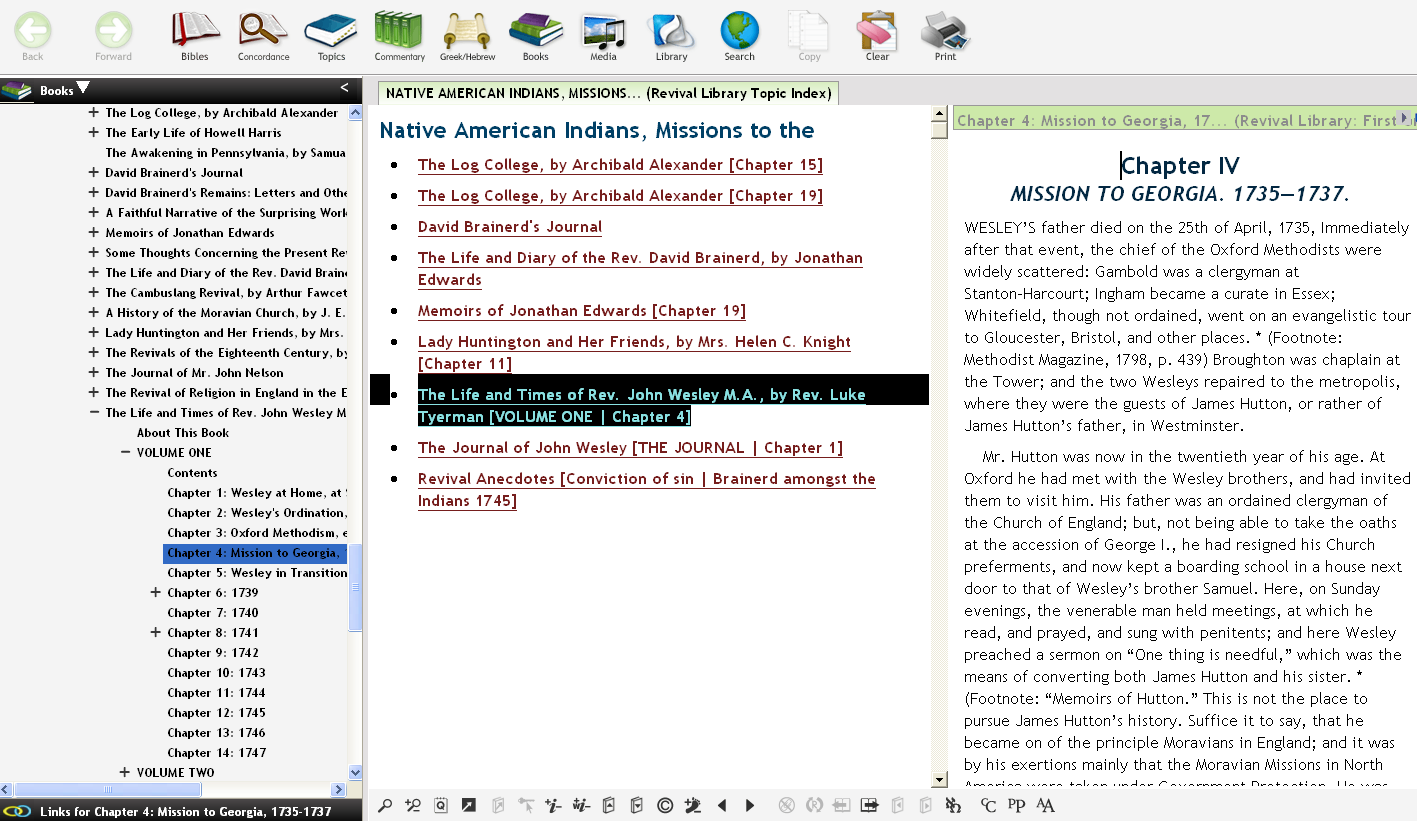 For each Topic, there is a list of directly relevant references 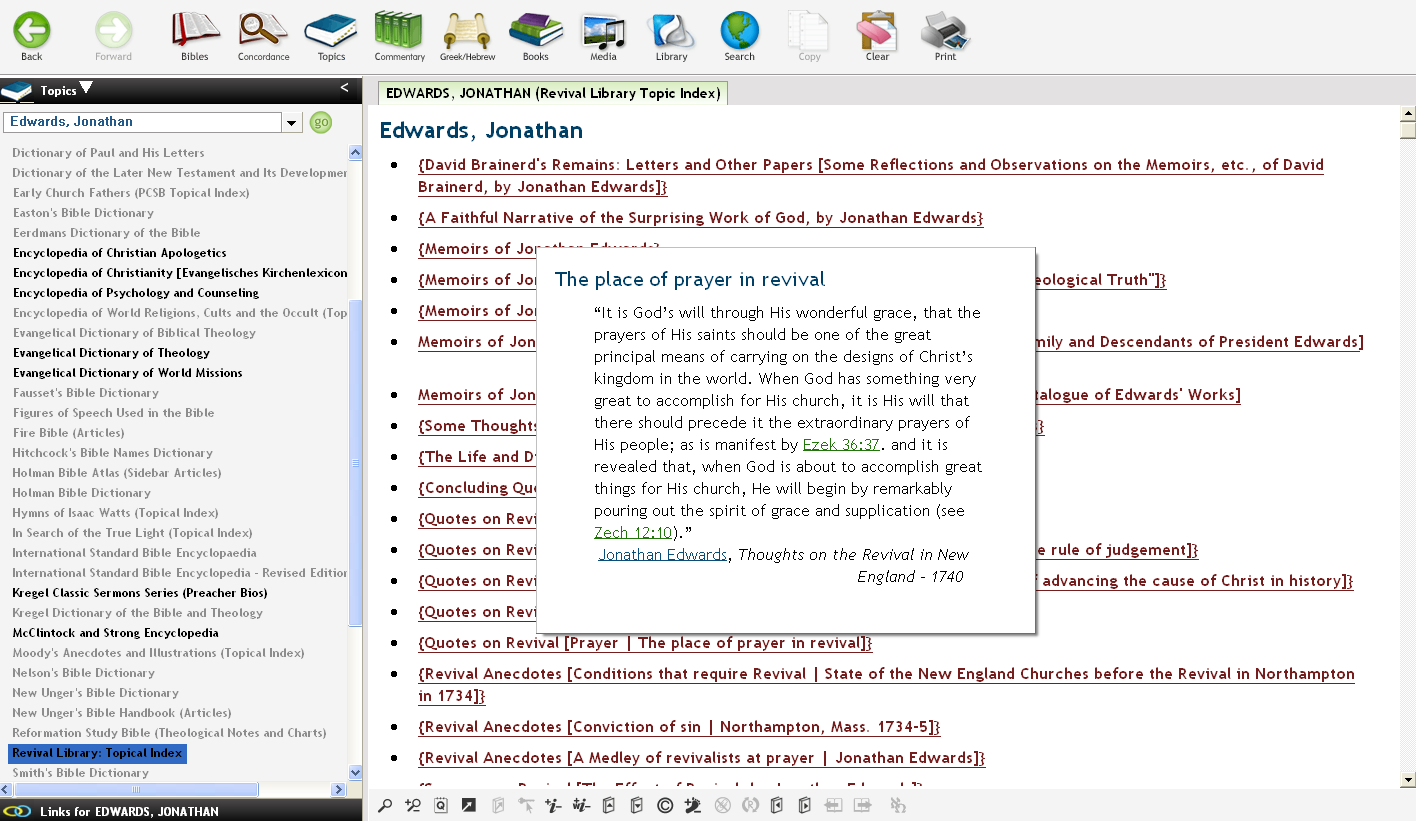 The hover feature (in Version 5.2) allows for a quick look at each section.