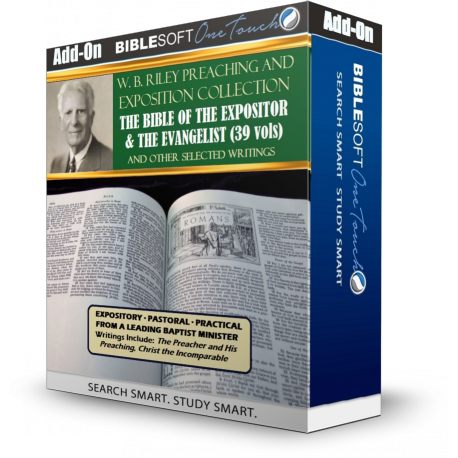 A collection of writings from W. B. Riley, a notable Baptist minister of the early 20th century, and a leading proponent of Fundamentalism (in the Fundamentalist-Modernist debates).

This is a collection of writings by Baptist minister and theologian William Bell (W. B.) Riley (1861-1947). Featured in the collection is his 39-volume Commentary set entitled The Bible of the Expositor and the Evangelist (published between 1925 and 1938). It combines sections of Bible exposition together with dozens of sermons preached by Riley over decades of work in the ministry. All of it is arranged more or less in Biblical order, so that the entire work functions as a Commentary set within PC Study Bible. Riley was a leading figure within American Fundamentalism in the early 20th century, and his sermons and commentary very much reflect this viewpoint. Staunchly conservative in nearly every respect, including on many practical social issues of his time, which he often addresses directly in the sermons, Riley's work is indeed, in many ways, a product of his period. Some of his attitudes and the issues he discusses may strike modern readers as odd, or even offensive, at times. As in the case of all historical works, believers today need to read these sermons with caution, recognizing that certain opinions and attitudes today, even among conservative Baptists and others who would consider themselves "Fundamentalist", may be very different from what they were in Riley's time.

Also including in this collection is Riley's Christological work Christ the Incomparable (available for separate purchase), and three writings dealing with issues and areas of concern for the Christian pastor—preaching and sermon preparation, evangelism, and other practical aspects of ministerial work within the church setting. The titles in this bundle (also available separately) are: