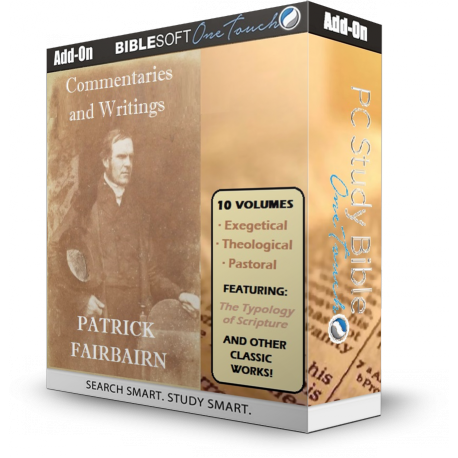 Commentaries and Writings of Patrick Fairbairn

A collection of writings from a leading Evangelical (Reformed) scholar and minister of the late-19th century, including his 2-volume The Typology of Scripture and other exegetical and doctrinal works.

Here we offer a 10-volume collection of Commentaries and other key writings from Patrick Fairbairn (1805-74), a leading Reformed scholar, theologian, and minister in the Free Church of Scotland. Fairbairn's exegetical and theological talents are demonstrated in these writings, most notably his two-volume The Typology of Scripture (1845, with multiple editions), long considered a standard work on the typological interpretation of Scripture (i.e. study of types in the Bible), from a Protestant point of view. This emphasis on hermeneutics (interpretation), with an interest in Bible Prophecy is seen in two other of Fairbairn's major publications—Prophecy, Viewed in Respect to Its Distinctive Nature, Special Function, and Proper Interpretation (1856, 1866), and Heremeneutical Manual, Introduction to the Exegetical Study of the Scriptures of the New Testament (1859). Fairbairn's work as a minister informs his Pastoral Theology: A Treatise on the Office and Duties of the Christian Pastor (1875), and he examines the difficult subject of the place of the Old Testament Law in God's plan in The Revelation of Law in Scripture (1869).

This collection also includes several Commentaries by Fairbairn, principally The Pastoral Epistles and Ezekiel and the Book of His Prophecy. Another expository volume on the Old Testament, Jonah: His Life, Character, and Mission, is also part of the collection.

Finally, as a bonus volume, we include Divine Revelation Explained and Vindicated, subtitled "A Course of Lectures for the Times". It is a set of six lectures, given in 1866, on the subject of the inspiration of Scripture and other, related theological topics. Fairbairn contributed the opening lecture, along with other scholars and theologians such as Robert Buchanan, Henry Calderwood, and Marcus Dods.