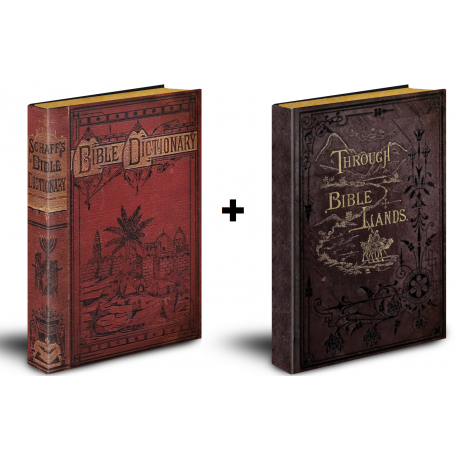 A bundled pairing of two popular works by historian Philip Schaff, providing insight on the World of the Bible.

We have bundled together two popular works by church historian and scholar Philip Schaff (1819-1893) on the World of the Bible:

Schaff's Dictionary of the Bible is one of several popular single-volume Bible dictionaries published in the 19th and early 20th centuries, as a way to make information about the world of the Bible more accessible to a wide audience of Christians and other interested readers. Schaff's work was originally published in 1880, and quickly went through a number of editions (an indication of its popularity). It was graced with more than 400 illustrations and twelve color maps—all of which are included in Biblesoft's electronic edition.

In 1877, Schaff went on a lengthy travel tour which included key areas of the Near East, or the World of the Bible—Egypt, Sinai, Palestine and Syria. Along the way, he was inspired to record notes of his journeys, which formed the basis for his book Through Bible Lands: Notes of Travel in Egypt, the Desert and Palestine (1878). The object of the book was to give readers "a clear idea of the actual condition and prospects" of the Near East, the lands of the Bible, at the time. While obviously dated, it provides a valuable snapshot of conditions in the late 19th century. Much of the geographical and natural data, of course, remains little changed, and continues to give useful insight to the Scriptural narratives. It is also written in a most engaging style, as is typical of all of Schaff's work.

The original print edition included more than thirty detailed illustrations, along with several maps. These are part of our electronic edition.