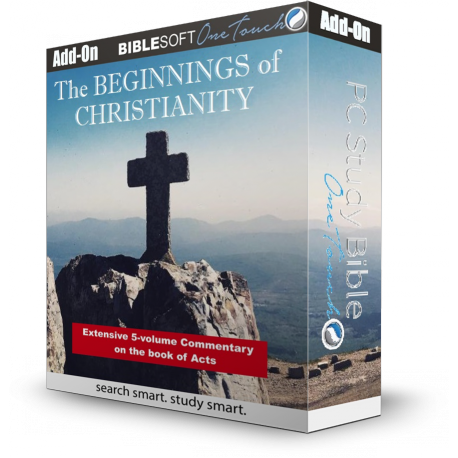 The Beginnings of Christianity: The Acts of the Apostles (5 volumes)

In celebration of the day of Pentecost and the birth of the Church, we are proud to offer The Beginnings of Christianity: The Acts of the Apostles—a Biblesoft exclusive—available here for the first time as a full electronic text! This five-volume work, published between 1920 and 1933, and originally planned as the first part of a larger project, represents a landmark of critical scholarship on the New Testament. At more than 2500 pages in print, this comprehensive commentary covers virtually every area of the book of Acts. If you have a question on any point of the text, you are likely to find it addressed somewhere in these volumes.

We have given considerable time and attention to this valuable work, making sure that the Greek text and all the many references are accurate and linked together. Bible references by default link to the Greek New Testament (and LXX); in addition, references to the Pseudepigrapha, the Early Church Fathers, Josephus and Philo are linked, including (wherever possible) to the Greek text of the Apostolic Fathers, Philo and Josephus.
When a verse is discussed in more than one location within the volumes, Biblesoft's Commentary interface allows you to browse all occurrences—whether in the main Commentary, Textual Notes, Introduction or Supplementary articles—and select the one you want.
Despite having been written more than 80 years ago, these volumes have more than stood the test of time. Nearly all subsequent critical studies on Acts have built on the work of Lake, Cadbury, Ropes, et al, and it continues to be consulted and cited with great frequency by scholars today. All told, The Beginnings of Christianity remains unsurpassed, and is arguably the most thorough and comprehensive Commentary on Acts ever written.

The Beginnings of Christianity was produced in the same period (and in much the same manner) as the landmark International Critical Commentary (ICC) series. Since the original ICC set did not include a volume on Acts, the 5-volume Beginnings serves as the perfect complement. If you have not yet purchased the ICC New Testament series from Biblesoft, you may want to take advantage of this limited opportunity to buy both the ICC and The Beginnings of Christianity together—and save! These are two commentary sets that belong in the library of every serious Bible student (and aspiring scholar), and are well worth the investment.