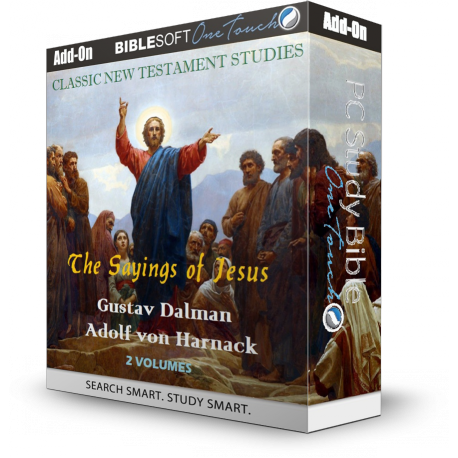 Two classic studies on the Gospels and the Sayings of Jesus.

Biblesoft presents two landmark works on the Gospels by scholars Adolf von Harnack (1851-1930) and Gustav Dalman (1855-1941). These are Dalman's The Words of Jesus (Worte Jesu, 1898 English transl. 1902) and Harnack's The Sayings of Jesus (1908). Both are pioneering studies on the sayings of Jesus as they came to be preserved and recorded in the Gospels.

Dalman, who had done extensive work in Palestine, was a specialist in Oriental (Semitic) languages—in particular, of the Aramaic language in the biblical and post-biblical periods. He was one of the first Biblical scholars to present a detailed study on the words of Jesus and the Gospels as they might have been spoken (and recorded) originally in Aramaic. This approach came to dominate Gospel studies for much of the early-mid 20th century, though it is less popular among commenator's today. In The Words of Jesus, Dalman examines many words, phrases and expressions used by Jesus (and the Gospel writers), considering the possible (Hebrew/Aramaic) background, along with many parallels in Jewish literature (often from a somewhat later period, admittedly). It remains a fascinating and important work today, however one evaluates the significance of such evidence.

Harnack's The Sayings of Jesus (the second volume of his famous New Testament Studies [1907-12], available separately) takes a rather different approach. He looks specifically at the sayings of Jesus which make up what is common referred to today as the so-called "Q" source (material found in Matthew and Luke, but not Mark). This makes Harnack's work primarily a study on the Synoptic Gospels (the "Synoptic Problem") and source criticism. It is likewise a most detailed study, though of a different sort than that of Dalman, and remains valuable even today for scholars and commentators studying this question.