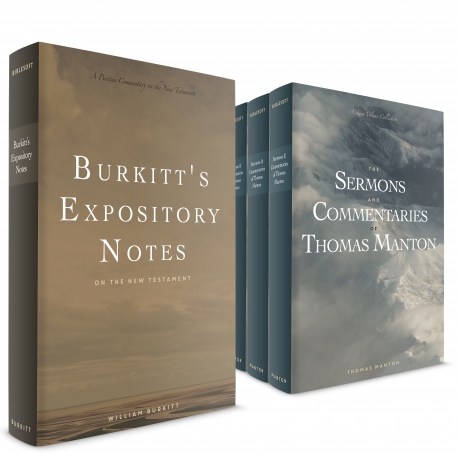 This bundle brings together two powerhouse contemporaries who were both well-known and well-respected for their expository preaching. Burkitt and Manton were like two sides of the same theological coin. This collection brings them together to add time-tested sermons and commentaries to your PC Study Bible library.

William Burkitt, noted 17th century biblical scholar and expositor, shares his practical observations in his verse-by-verse commentary Expository Notes on the NT. Covering all 27 books of the NT, he leaves no chapter unexamined. Burkitt's unique take on expository writing is both refreshing and simplistic. He takes a verse and intricately breaks down each 'practical observation' into a convenient  bullet point. This approach provides a form that will cause the reader to examine even the smallest detail of a verse that otherwise may be missed in a cursory reading.
Learn More [link to page, right align]

Thomas Manton, known and praised for his expository preaching, this collection contains hundreds of pages of sermons and commentary on grace, justification, the book of James, the book of Jude, and more. Manton's unique sermon style reads more like a verse-by-verse commentary as he often devotes an entire sermon to a single verse of scripture. In PC Study Bible, we have added special tagging to allow you to link to and follow along with these verse-by-verse writings.

Excerpt From Burkitt's Expository Notes on the NT:

1. John's character; he was a light, a burning and a shining light: he had in him a light of knowledge, to enlighten, direct, and comfort others; and this his knowledge was accompanied with zeal: he was aburning light in his doctrine and a shining lamp in his conversation: he had the light of knowledge in his head, the warmth of zeal in his heart, and the influence of both in his life.

Learn hence, 1. That those whom God calls to the office and work of the ministry, he furnishes with abilities and endowments suitable to their great employment, he endows them with a light of knowledge, which is animated by the heat and warmth of zeal.

2. That ministerial gifts and abilities are not bestowed alike upon all, but dispensed variously. All are lights according to their measure, but all are not equally burning and shining lights for proportion and degree.

3. That the brightest burning and clearest shining lights in the church of Christ, have but their time in this world; they are subject, as well as other men, to the common condition of mortality, and the lamps of their lives burn out the faster, by lighting others to heaven. John was a burning and a shining light; but now is put out and gone.

1. They rejoiced. The word signifies, they leaped for joy, and danced about him as children do about a bonfire, when he first began his ministry among them. O, how warm are the affections of a people, when a pious and zealous minister comes first among them.

3. They rejoiced only for a season; for an hour, as the word signifies. For a short time John's ministry was acceptable.

Learn, 2. That as nothing in general is so mutable as the mind of man, so nothing in particular is so variable as the affections and opinions of people towards their ministers. The lamp of John's ministry was always alike burning and shining, his oil did not waste, but his hearer's zeal wasted, and their affection cooled: those whose gifts are not all abated, may yet find a great abatement in the acceptation of their gifts: therefore let no man live upon the breath of men; least of all let ministers live upon the popular air, or the speech of the people.

O, let us live upon the credit which we have with God, and rejoice chiefly in his esteem. If our performances find acceptance with God, we are safe and happy, though they fall under contempt with men.