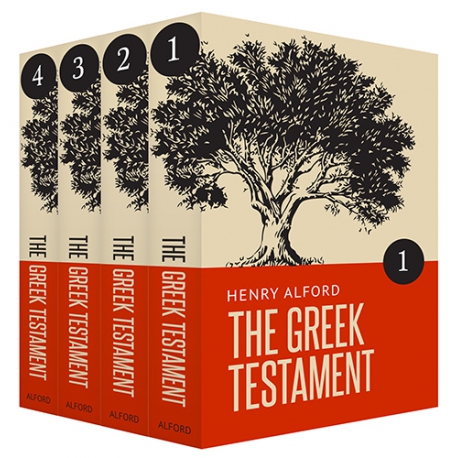 Henry Alford's The Greek Testament is one of the most important and comprehensive works on the Greek text of the New Testament.

Henry Alford's The Greek Testament is one of the most important and comprehensive works on the Greek text of the New Testament. Written over the course of twenty years, this critical exegetical commentary includes detailed grammatical, literary, lexical, and textual analysis of nearly every Greek word in the New Testament, along with comprehensive linguistic and idiomatic notes.

What is chiefly noticeable in regard to the work is its strictly critical character. It is the production of a philologist rather than of a theologian. Abbreviations, punctuations, elisions of orthography, systematic ellipses, the merest turns of the pen in this or that manuscript, are weighted against microscopic scruples in the balance of his judgment. There can be little question that the work appreciably increased the aggregate amount of the biblical knowledge of Alford's immediate contemporaries. So carefully matured were his researches in the regions of exegesis, already crossed and recrossed by the footprints of countless commentators, that the work is regarded as in many respects authoritative even among those who differ from him widely on many important questions. (1902 Encyclopedia)

Using The Greek Testament, in conjunction with the power of PC Study Bible, you can accomplish advanced textual work on the Greek New Testament quickly and accurately. Anyone interested in serious study of the Greek text will profit immensely from this work.

Praise for The Greek Testament

When I’m stumped with a...grammatical or syntactical or logical [question] in Paul, I go to Henry Alford. Henry Alford...comes closer more consistently than any other human commentator to asking my kinds of questions.
John Piper

An invaluable aid to the critical study of the text of the New Testament. You will find in it the ripened results of a matured scholarship, the harvesting of a judgment, generally highly impartial, always worthy of respect, which has gleaned from the most important fields of Biblical research, both modern and ancient, at home and abroad...it is an exceedingly able and successful work.