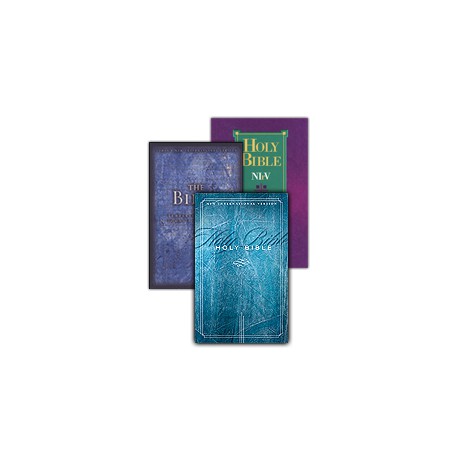 The NIV Family® is three audience-specific versions of the NIV – the most widely accepted contemporary Bible translation today.

NOTE: This product is restricted to distribution in the United States and Canada. NIV Family will not be shipped to any non-US or Canadian address and it is not available as a download.

Though the NIV, TNIV and NIrV are now sold as the NIV Family, they operate independently, as did the previous versions, in PC Study Bible.

More than 100 scholars from six English-speaking countries and more than 20 denominations, as well as editors and English stylists, worked on the NIV. Taking 10 years to complete, the NIV translation was created, and is maintained, with the mandate to accurately and faithfully translate the original Greek, Hebrew, and Aramaic biblical texts into clearly understandable English.

The NIV is the most widely accepted contemporary Bible translation today. More people today buy the NIV Bible than any other English-language translation.

While older forms of English may not present a problem for some readers, they can present barriers to understanding and fully engaging the Bible for younger readers who have grown up using more-contemporary English.

The TNIV Committee on Bible Translation (CBT) attempted to make the TNIV a balanced, mediating version - one that would fall about halfway between the most literal and the most free. Strictly speaking, the TNIV is not a dynamic equivalence translation. In short, a balanced, mediating version avoids the extremes of some contemporary translations and achieves a balance that will appeal to the most people for the longest period of time.

The TNIV is distinct in using gender-accurate language only where the meaning of the original text was intended to include both men and women.

The NIrV was designed to make the Bible clear and understandable to early readers and can be read by a typical fourth grader. For this reason, it is also of value to the millions for whom English is a second language. It intends to be distinguished by five fundamental characteristicsreadability, understandability, compatibility with the NIV, reliability, and trustworthiness. It serves as a natural stepping-stone to the NIV when the time is right.