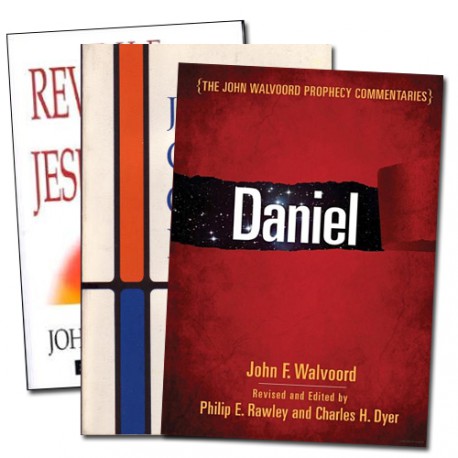 John Walvoord is widely acknowledged as the dean of all twentieth century prophecy scholars on the strength of his prolific contributions to the contemporary study of the end-times. As president and chancellor of Dallas Theological Seminary for over 50 years, he inspired and trained ministers, teachers, and Christian college and seminary professors. His teaching and subsequent publications on prophetic subjects have the hallmarks of being true to Scripture and easily understandable by all.

Our new Walvoord Collection features three foundational titles which will provide new insights to seasoned as well as new students of Christology and biblical prophesy.

Daniel: The Key to Prophetic Revelation
Widely acknowledged as a landmark work on the book of Daniel

This is a detailed, systematic analysis of the Book of Daniel with emphasis on investigating and refuting non-biblical views. Daniel: The Key to Prophetic Revelation is a companion to The Revelation of Jesus Christ . It goes beyond a mere presentation of the author's interpretation of Old Testament prophecy. It quotes Bible scholars from different theological perspectives to help you discover the meaning of the Scriptures cited. The book includes:·

Though contemporary analysis and explanation, this Walvoord masterpiece emphasizes the value and genuineness of Daniel and his prophecies in the light of modern biblical and archaeological evidence.

The Revelation of Jesus Christ
A verse-by-verse study of one of the most complex books in the Bible.

Developed from years of teaching, dedicated study, and sound evangelical scholarship, this is a sane and sensible commentary on the book of Revelation.

No other New Testament book evokes the same fascination, produces wider divergence of interpretation, and is less understood than the book of the Revelation. The Bible was intended to be understood, the author maintains, and Revelation is no exception. Here then is a book for those who have been puzzled by the seals, trumpets, woes, plagues, and vials, for those who do not understand who the beast, the false prophet, and the great red dragon represent.There is also excellent analysis for those who want to know the meaning for our day of the letters to the seven churches.

Walvoord recognizes Revelation's symbolic features, but points out that much of it can be interpreted literally. He defends the premillennial position, but at crucial points considers other views — the allegorical and historical, and the amillennial and postmillennial approaches.

With more than 200,000 copies in print, The Revelation of Jesus Christ has earned its place as a highly-regarded exposition and approach to the book of Revelation from a dispensational viewpoint.

Of the life and work of Jesus, the apostle John said, “Even the world itself could not contain the books that should be written” (John 21:25). Acknowledging the size of the task, as well as its importance, John Walvoord has written this systematic presentation of the Person and work of Christ from eternity past to eternity future.

Beginning with an analysis of modern trends in the study of Christology, Dr. Walvoord shows that “contemporary Christology has in many respects confused rather than clarified the extended revelation of the Word of God.”

Analyzing the Old Testament, he shows Christ in history, typology, and prophecy. Then, in the New Testament, he examines the life and work of the incarnate Christ, including the doctrines of atonement, redemption, propitiation, and reconciliation. This add-on will complement your other Walvoord content with an examination of the present and future work of Christ and the completion of His Kingdom.