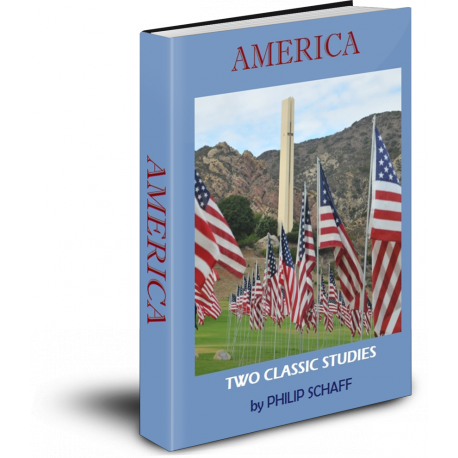 Two classic works on the United States of America by popular historian and commentator Philip Schaff.

The small bundle brings together two classic titles on America (and Christianity in America) by historian Philip Schaff:

America: A Sketch of the Political, Social, and Religious Character of the United States of America (1855)

This work, derived from lectures given before a Church Assembly in Germany, is divided into three parts:

Church and State in the United States, or, The American Idea of Religious Liberty and Its Practical Effects (1889)

This study by Schaff was written to commemorate the Centennial Celebration of the U. S. Constitution, with its guarantee for the free excercise and enjoyment of religion. The American system in this regard is given a thorough examination, with its benefits and consequences analyzed, as well as consideration of its place both in its historical context and in the wider Christian world. An Appendix gives twelve selected historical documents which illustrate and relate to the subject at hand.

NOTE: Both of these titles are also included as part of the America Collection: Essays and Documents and also the Schaff Popular Commentary - Christ and Christianity Collection.