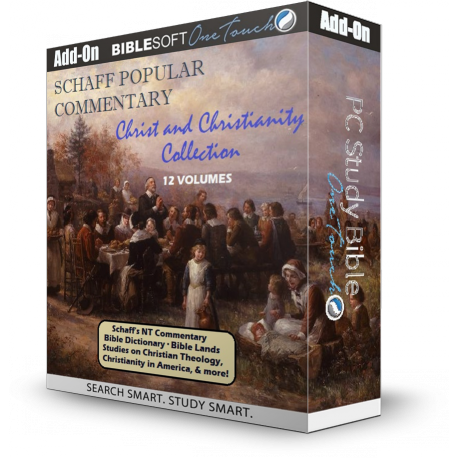 A 12-volume collection of works by Philip Schaff, including his Popular Commentary on the New Testament, Through Bible Lands, and the Schaff Dictionary of the Bible.

This 12-volume collection of writings by distinguished German-American historian, theologian and commentator Philip Schaff (1819-93) demonstrates his life-long skill and interest in bringing Biblical scholarship and matters of Christian history and theology to a popular audience—that is, to the ordinary educated layperson, student and pastor. Featured is the Popular Commentary on the New Testament (4 volumes, 1878-) an international and interdenominational New Testament commentary that can be used and enjoyed any everyone, containing solid exegesis and practical applications for nearly every verse in the New Testament.

Also included are the following titles:

Schaff's Dictionary of the Bible (1880), one of several popular single-volume Bible dictionaries published in the 19th and early 20th centuries, as a way to make information about the world of the Bible accessible to a wide audience of Christians and other interested readers. Schaff's work was originally published in 1880, and quickly went through a number of editions (an indication of its popularity). It was graced with more than 400 illustrations and twelve color maps—all of which are included in Biblesoft's electronic edition.

Through Bible Lands: Notes of Travel in Egypt, the Desert and Palestine (1878). In 1877, Schaff went on a lengthy travel tour which included key areas of the Near East, or the World of the Bible—Egypt, Sinai, Palestine and Syria. Along the way, he was inspired to record notes of his journeys, which formed the basis for this book, the object of which was to give readers "a clear idea of the actual condition and prospects" of the Near East, the lands of the Bible, at the time. While obviously dated, it provides a valuable snapshot of conditions in the late 19th century. Much of the geographical and natural data, of course, remains little changed, and continues to give useful insight to the Scriptural narratives. It is also written in a most engaging style, as is typical of all of Schaff's work. The original print edition included more than thirty detailed illustrations, along with several maps. These are part of our electronic edition, but we have also taken the larger illustrations and made them available as a topically keyed Image set which can be accessed under Media/Photos in PC Study Bible.

These two titles are also available separately or as a bundle pair.

The Person of Christ (1880) is subtitled "The Perfection of His Humanity Viewed as a Proof of His Divinity", and so makes is approach and purpose known. Written largely as a popular response (in English, for American audiences) to the skeptical-critical mode of New Testament scholarship which had become increasingly prevalent in the 19th century. While all of the essential questions and arguments are addressed, Schaff takes a simple, highly readable approach aimed at the non-scholar—for the average interested Church-goer, Pastor and student of the Bible. His treatment generally follows the Gospel narrative, while, at the same time, introducing key Christological issues along the way. A short set of critical notes offers a bit deeper examination at several points. A particularly interesting feature, and very much in line with Schaff's historical concerns and style of authorship, is the appendix entitled "Impartial Testimonies to the Chaaracter of Christ", which includes extracts from the writings of numerous non-Christians, from ancient times to the present (c. 1880). The point being made is even non-believers and skeptics are essentially forced, based on an objective view of the evidence, to recognize the examplary character of Jesus.
[Also available for separate purchase, or as part of the "Life and Person of Christ Study Package"]

Christ and Christianity (1883) is a collection of a dozen major articles and essays by Schaff on a variety of theological and historical topics, including two prominent studies on Christology. He also addresses important subjects which remain of considerable interest to Christians today: Differences between various denominations, including issues which separate Protestants and Roman Catholics, the promotion of Christian unity, Evangelical principles, Religious freedom, Sabbath/Sunday observance, and more. You are bound to find much that is both informative and relevant to you in these articles.

The Principle of Protestantism (1845), an early work drawn from Schaff's inaugural address (1844) as Professor of Church History and Biblical Literature in the Theological Seminary of the German Reformed Church. Schaff was a long-time advocate for Church Unity, especially among Reformed/Evangelical denominations, but also in the wider Protestant world as well. Much of his well-known writing and teaching on Church history, Creeds, etc, is at least partly aimed at this ecumenical goal. He also strove to promote cooperation between the Reformed Churches in Germany and America, in particular. Much of this comes through clearly in this work, which serves as a still-valuable summary of the chief characteristics of Protestant Christianity.

The Progress of Religious Freedom (1889). Anyone familiar with Schaff's writings on Church history will be aware of his emphasis on Religious liberty, or freedom; these portions of his writings are among the most inspiring, and reflect more than a critical study of history—they are also aimed at promoting peace and understanding between various denominations and sects. This work was originally published as papers for the American Society of Church History, and nobly traces the rise of religious freedom and toleration in the Western Christian world, including a number of key documents. The author advocates strongly for the principle that orthodoxy and strong religious conviction does not have to lead to intolerance and persecution.

Finally, this collection features two classic titles on America (and Christianity in America), also included as part of our America Collection: Essays and Documents:

America: A Sketch of the Political, Social, and Religious Character of the United States of America (1855). This work, derived from lectures given before a Church Assembly in Germany, is divided into three parts:

Church and State in the United States, or, The American Idea of Religious Liberty and Its Practical Effects (1889). This study by Schaff was written to commemorate the Centennial Celebration of the U. S. Constitution, with its guarantee for the free excercise and enjoyment of religion. The American system in this regard is given a thorough examination, with its benefits and consequences analyzed, as well as consideration of its place both in its historical context and in the wider Christian world. An Appendix gives twelve selected historical documents which illustrate and relate to the subject at hand.

NOTE: The Schaff Popular Commentary of the New Testament in included in the OneTouch Professional Series; if you already have the Commentary in your library, you may purchase the other titles in this collection (8 volumes) separately.