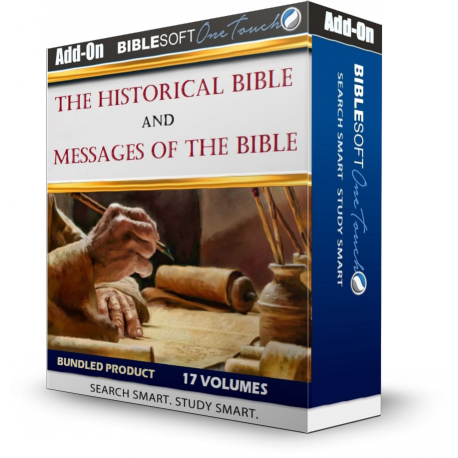 A combination of two classic Bible Introduction and Commentary sets, each with a distinctive scholarly and critical approach that was truly unique for works of this kind at the time they were written.

This is a valuable priced pairing of two classic commentary sets: The Messages of the Bible (11 volumes) and The Historical Bible (6 volumes)

A Bible Introduction, Survey, and Commentary all rolled into one—The Messages of the Bible is a valuable resources for Bible students and ministers alike. Originally published in 11 volumes (between 1899 and 1911), and written by Frank Knight Sanders, Charles Foster Kent, and other distinguished scholars, this extensive set is distinguished by its critical and scholarly treatment of the material. This makes it quite different from the typical Bible Introduction or Survey. An important emphasis is on how the Scriptures came to be written, often through the inclusion and development of earlier historical and literary traditions. This affects how the commentary is arranged throughout the volumes—instead of treating each book in canonical order, the arrangement is historical/chronological and thematic. Two volumes are devoted to the messages of the Prophets (Earlier and Later), one to the Law Codes in the Pentateuch, another to the work of the Old Testament historians, and others to the Psalms, the individual Poems, the Apocalyptic literature, the teaching of Jesus in the Synoptic Gospels and the Gospel of John (respectively), the writings of Paul, and then to the remaining New Testament writings. This critical approach, followed in more detail within the individual chapters and sections of each volume, makes The Message of the Bible a special kind of Introduction to the Scripture—one that is not only valuable to the beginner, but to the more experienced student, teacher, and pastor as well.

The Historical Bible (1908-16), by Charles Foster Kent (a main contributor to The Messages of the Bible), is a distinctive Bible Introduction and Commentary which focuses on both the historical background and the historical development of the Scriptures—including how, when, where and why the books came to be composed as they were. Kent here follows much the same approach as in The Messages of the Bible, but with greater emphasis being paid to the historical aspect. The outlook is scholarly and (moderately) critical, utilizing and working with the newly developed methods and theories of Biblical Criticism to give the material a distinctive feel and depth, beyond the typical Bible Introduction or general Commentary set. Like the Messages, it strikes the balance of being of genuine value for both the beginning reader and the more experienced student or minister alike.