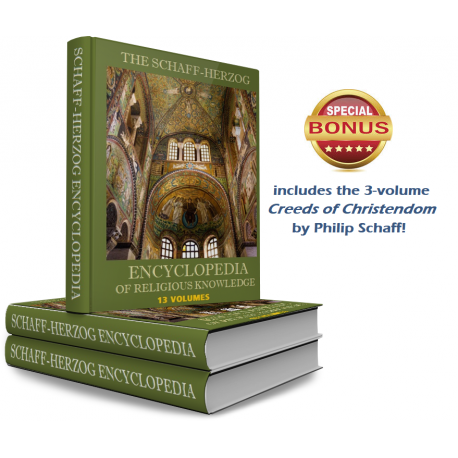 The classic 12-volume Encyclopedia, still used and cherished by scholars and students today: a Bible Dictionary, Theological Dictionary, and Dictionary of Church History—all rolled into one. Bundled together with the 3-vol. Creeds of Christendom.

The New Schaff-Herzog Encyclopedia is a subsequent revision, produced under the supervision of Samuel Macauley Jackson, based largely on the 3rd edition of the German Realencyklopädie (edited by Albert Hauck, 1896). It was published in 1908, in twelve volumes (with a thirteenth Index volume).

The New Schaff-Herzog Encyclopedia of religious Knowledge is essentially three Encyclopedias rolled into one—a Bible Dictionary, Theological Dictionary, and Dictionary of Church History. It is similar in size and scope to the McClintock & Strong set, but a bit more streamlined and up-to-date. It also adopts a more critical approach to many of its topics, making it a valuable complement to McClintock & Strong in your PC Study Bible Library.  You will find thousands of articles—many of them extensive (even exhaustive) treatments—all cross-referenced and with active Bible verse links, etc, to integrate with the rest of your Biblesoft content. Despite its age, the Schaff-Herzog Encyclopedia remains highly valued and widely used by scholars and students of various stripes today.

As a BONUS, we are including the 3-volume Creeds of Christendom, by Philip Schaff. This highly readable and informative work offers what is perhaps the best survey in English of the creeds and confessions of faith prior to the 20th century. Students of theology, Church history, and the various Christian denominations, will find this a most useful set to add to their library!

25 other products in the same category: