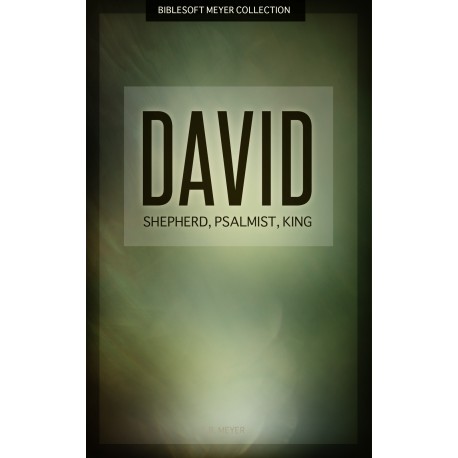 Learn all about David - the Shepherd, Psalmist and King in this thorough work by F. B. Meyer. 27 chapters draw from 1 Samuel, 2 Samuel, Psalms, and 1 Chronicles to paint a comprehensive picture of this integral Biblical character.

Learn all about David - the Shepherd, Psalmist and King in this thorough work by F. B. Meyer. 27 chapters draw from 1 Samuel, 2 Samuel, Psalms, and 1 Chronicles to paint a comprehensive picture of this integral Biblical character.

In PC Study Bible, this work can be opened both as a Book and as a Commentary.

Sweet singer of the world; ancestor of Christ; founder of a dynasty of kings; a prophet, inspired and taught, as the Apostle Peter tells us, by the Holy Ghost; the type and precursor of him who, through his Son, was also his Lord; the man after God's own heart, who "did that which was right in the eyes of the Lord, and turned not aside from anything that he commanded him all the days of his life, saveonly in the matter of Uriah the Hittite." So long as time lasts David must always enlist affection and command respect.

One of the greatly loved preachers of his day, Frederick Brotherton Meyer was a pastor, author, Bible teacher and evangelist. A distinct feature of Meyer's ministry was his outcry against the social evils of his day. Not only was he effective in the temperance movement, but he was also responsible for the closing of over 500 houses of prostitution. He also formed a prison aid society. A devoted student of God's Word, he was the author of over 40 books, including Bible biographies, devotional commentaries, sermon volumes and expository works. He also authored several pamphlets and edited a number of magazines. Charles H. Spurgeon said of him, Meyer preaches as a man who has seen God face to face.

NOTE: This title is part of the F. B. Meyer Collection, and may also be included in the OneTouch Library Series or other packages (check listings).

19 other products in the same category: