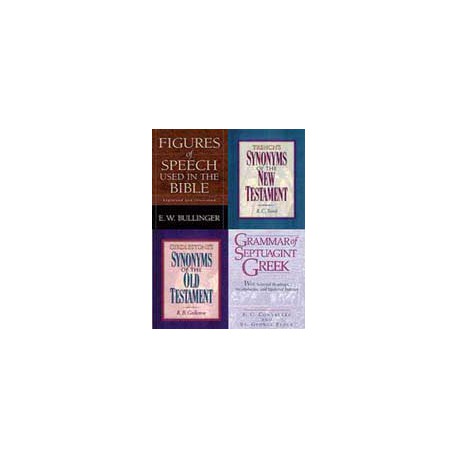 Figures of Speech: Figures of Speech Used in the Bible is an extensive reference book and study guide for serious Bible students. Written by famous theologian E.W. Bullinger, this dictionary of phrases classifies them into three distinct divisions: figures involving omission, addition, and change. He further breaks down whether figures affect the words themselves, the sense, meaning, order, or application of words. It includes both Greek and English translations of the figures in question, examples and illustrations, a detailed table of contents, appendices, and several indexes, including indexes of figures in both Greek and English, of subjects, structures, and texts, and of Hebrew and Greek words explained. This comprehensive study tool should be considered necessary for any serious Bible student or theologian.

Trench's Synonyms of the New Testament: This work was first published in 1854 by Trench, an Anglican archbishop at Dublin. It has been in print nearly all the time since. Trench had a genius for understanding Biblical Greek, and the proper synonyms of the same. He was able to express himself in a way that is easily understood and this shows through the pages of this work which compares well to modern-day word study references.

A thorough discussion is given of the meaning and use of each of 117 sets of Greek word synonyms. Comparisons between words are detailed and explanations given as to why they are used in various parts of the Bible.The Greek of the Septuagint is used to draw comparisons to Hebrew words and how their subtle meanings have been translated.

Girdlestone's Synonyms of the Old Testament is a classic reference tool which provides accurate, thorough definitions and information to enhance any word study. It covers 27 major categories and almost 300 subjects, and is designed be used by those who understand little or no Hebrew

Numerically coded to Strong's numbers for ease of use, this work is also indexed by Hebrew, Aramaic, and Greek words, scripture references and subjects. An essential resource for those seeking to increase their understanding of the Old Testament.

To access the Girdlestone's article, go to the Greek or Hebrew word list menu, select the "By Strong's Number" menu, "Old Testament" and finally Girdlestone's Synonyms of the Old Testament. Enter an Old Testament Strong's Number. If Girdlestone's has any information on that particular number it will light the "Okay" button. To get a picture of the expansiveness of the Girdlestone articles, you may want to open it from the Books menu above the left-hand navigation column. You may also find information quickly by searching on the Hebrew transliterations, such as korban for offering and nagash meaning to draw near.

Grammar of the Septuagint Greek by Fredrick Conybeare and George Stock explains differences in the Koine Greek, in which the New Testament was written, and the classical Greek translation of the Old Testament which was utilized for the Septuagint. This is an ideal reader for anyone with some knowledge of Greek wishing to study the Septuagint in its original language.

Helpful improvements include: new, updated indexes of ancient sources and significant Greek words from the readings; a convenient and complete vocabulary with definitions; and an alphabetical list of proper nouns from the readings, with translations.

The extended readings with verse-by-verse commentary, makes Grammar of Septuagint Greek a much more valuable way to learn how the underlying Hebrew was translated. Included are explanations of variant translations that differ from the Masoretic text, as well as analysis that clarifies difficult passages in the Hebrew.

NOTE: These titles are included in the OneTouch Professional Series.

17 other products in the same category: