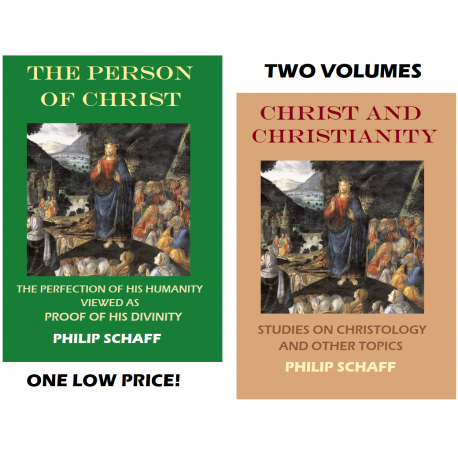 Two volumes by Church historian and theologian Philip Schaff, on the subject of Christology and other theological and doctrinal topics.

Two classic works by historican, theologian, and commentator Philip Schaff dealing with Christian theology, and, in particular, the subject of Christology:

The Person of Christ (1880) is subtitled "The Perfection of His Humanity Viewed as a Proof of His Divinity", and so makes is approach and purpose known. Written largely as a popular response (in English, for American audiences) to the skeptical-critical mode of New Testament scholarship which had become increasingly prevalent in the 19th century. While all of the essential questions and arguments are addressed, Schaff takes a simple, highly readable approach aimed at the non-scholar—for the average interested Church-goer, Pastor and student of the Bible. His treatment generally follows the Gospel narrative, while, at the same time, introducing key Christological issues along the way. A short set of critical notes offers a bit deeper examination at several points. A particularly interesting feature, and very much in line with Schaff's historical concerns and style of authorship, is the appendix entitled "Impartial Testimonies to the Chaaracter of Christ", which includes extracts from the writings of numerous non-Christians, from ancient times to the present (c. 1880). The point being made is even non-believers and skeptics are essentially forced, based on an objective view of the evidence, to recognize the examplary character of Jesus.
[Also available for separate purchase, or as part of the "Life and Person of Christ Study Package"]

Christ and Christianity (1883) is a collection of a dozen major articles and essays by Schaff on a variety of theological and historical topics, including two prominent studies on Christology. He also addresses important subjects which remain of considerable interest to Christians today: Differences between various denominations, including issues which separate Protestants and Roman Catholics, the promotion of Christian unity, Evangelical principles, Religious freedom, Sabbath/Sunday observance, and more. You are bound to find much that is both informative and relevant to you in these articles.

NOTE: Both of these titles are also included in the 12-volume Schaff Popular Commentary - Christ and Christianity Collection.