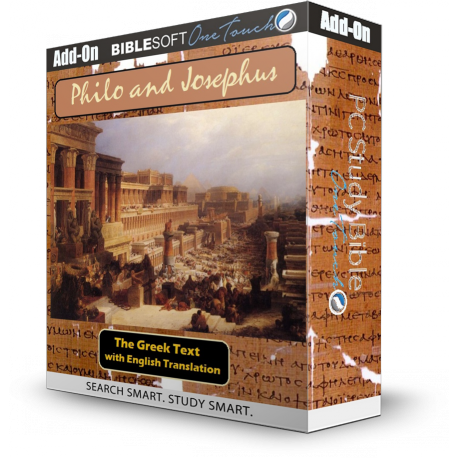 Works of Philo and Josephus (Greek Text with Translation)

The complete works of Philo of Alexandria and Flavius Josephus—first-century Jewish authors whose writings are most useful for studying the language and background of the New Testament. Includes the Greek text with translation.

Philo of Alexandria (c. 20 B.C. - 50 A.D.) and Flavius Josephus (c. 37-100 A.D.) are Jewish authors whose writings have largely survived, and which are indispensable for any serious study of the language and background of the New Testament. Philo's work consists largely of commentary on the Pentateuch, blending Jewish tradition with Hellenistic thought to create a unique style of interpretation. Josephus is best known for his multi-volume historical works—the Antiquities of the Jews and the Jewish War—which offer a treasury of information on life and politics in Palestine and Judea, especially during the 1st century.

NOTE: The Works of Josephus (in Greek) are included as part of the OneTouch Professional Series library. The Works of Philo have been included in several other previously released products (check listings and store categories).

9 other products in the same category: