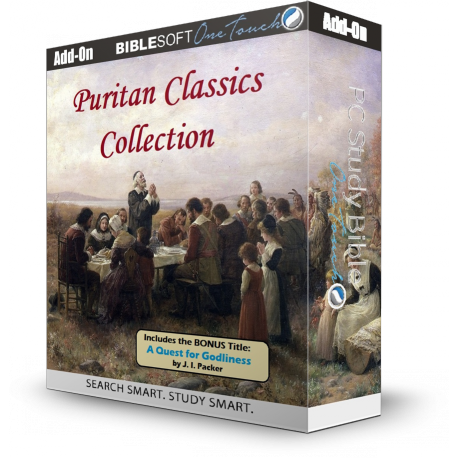 Biblesoft's landmark collection of writings by the Puritans, including the complete works of John Owen, John Bunyan and John Milton.

This is Biblesoft's landmark collection of writings by the Puritans—the first of its kind for Bible Study software. It is comprised of dozens of works and printed volumes, from some of the best known and cherished Puritan ministers, theolgians and authors, including:

John Owen — His complete works in 23 volumes – no larger collection found anywhere! “To master his works”, says Spurgeon, “is to be a profound theologian.” His more practical writings (especially volumes 6-9) are of immense benefit to all Christians, his exposition is valued for both in-depth scholarship and practical application.

John Bunyan — Bunyan's complete works (from a 3-volume print set) contains not only his famous Pilgrim's Progress and The Holy War, but many other writings. This includes his autobiography, Grace Abounding to the Chief of Sinners, and a wide range of theological, practical and allegorical works. Bunyan's colorful spiritual allegories and theological writings appealed greatly to the lower and middle classes in England, in particular, with wonderfully direct and lively imagery expressing Puritan thought and teaching.

Richard Baxter — Best at applying Scripture to life, Baxter's greatest success was in his quest to bring unity among Christians in England. Perhaps no book except Kempis and Pilgrim's Progress has been more widely read or more generally useful his The Reformed Pastor. Other highlights include: Saint's Everlasting Rest, A Call to the Unconverted, and Dying Thoughts.

Thomas Manton — Appointed chaplain to Oliver Cromwell, Manton was instrumental in the restoration of Charles II. In the Great Ejection of 1662, he was imprisoned, but was allowed to preach from prison. Among the easier Puritans to read, his works include: Treatises on Life of Faith and on Self-Denial, Discourses Tending to Promote Peace and Holiness, Practical Exposition on the Lord's Prayer and much more!

Thomas Watson — All of Thomas Watson's writings and sermons are replete with sound doctrine, practical wisdom, and heart-searching application. His profound spirituality, gripping remarks, practical illustrations, and beauty of expression make him one of the most irresistible of the Puritans. Included are: Doctrine of Repentance, The Art of Divine Contentment, All Things for Good, and many more!

Richard Sibbes — Eminent and influential preacher – to the extent that his foes did not dare move against him – Sibbes mastered the practical application of Scripture and theology. In The Bruised Reed we find the essence of Sibbes' own ministry and preaching at its best. Also included is his exposition of Hosea, The Returning Backslider.

William Gurnall — Famous for The Christian in Complete Armor (included), his work is more practical than theological and consists of a series of sermons on the latter portion of the 6th chapter of Ephesians. His style is pointed, fancy, graphic and fervently religious in tone, rendering him popular with modern readers.

Thomas Goodwin — Educated at Cambridge where he attained great proficiency in Greek, Hebrew and Latin, he became famous for unparalleled power in the pulpit. Forced into exile, he returned to England, preached and wrote widely, including the featured title Objects and Acts of Justifying Faith. His tombstone includes in the epitaph, “…none ever entered deeper into the mysteries of the Gospel, or more clearly unfolded them for the benefit of others…”

John Flavel — His Mystery of Divine Providence abounds in anecdote and is rich in metaphors and ingenious comparisons. His writings secure the reader's confidence by their unaffected seriousness, kind tone and deep sincerity; they win the heart with the evangelical warmth and personal kindness with which they are all aglow.

William Perkins — A drunkard in youth, he once heard a young woman say to her child "Hold your tongue, or I will give you to drunken Perkins, yonder." His conscience gripped; in conversion he became a strong exponent of Calvinism and always dealt sympathetically with those in spiritual need, particularly those in prison. In this offer we feature Perkins' The Art of Prophesying.

Thomas Brookes — Among the easiest of the Puritans to read, Brookes wrote over a dozen books, most of which are devotional in character, such as the one featured here: Heaven on Earth.

William Guthrie — The only Scottish Puritan in this offer, which includes The Christian's Great Interest, Guthrie was a man of tender heart and earnest love for the truth. Famous for his tendencies toward melancholy as well as the feeble state of his body, William Guthrie loved to engage in sports, yet died very young.

John Milton — His great poetry, most of it written in his later years while he was totally blind, left the world its ineradicable Renaissance version of tragedy, defined as the freedom to seek our own destiny coupled with the prospect of failure should we overreach ourselves in defiance of God. As poet he is considered second only to Shakespeare and his splendid vocabulary his swinging rhyme and majestic diction are unrivalled. No Puritan collection would be complete without a selection is his poems, such as Carmina Elegiaca, Paradise Lost, Paradise Regain'd, Samson Agonistes, Il Penseroso, and Areopagitica.

Though not among the Puritans, Jonathan Edwards is very much a spiritual descendent of the Puritans who emigrated to America and settled in New England. We have decided to include Edwards' complete works (from a 2-volume print set).

Finally, as a special BONUS, we have added A Quest for Godliness: The Puritan Vision of the Christian Life, by J. I. Packer (also available for purchase separately).

NOTE: All of these titles in this collection, except for A Quest for Godliness, are included as part of the main OneTouch Series and Version 5 Libraries.

You may also be interested in the Classic Sermons and Preaching Collection. To learn more about the historical background of the Puritan movement, you may find our Reformation Classics Collection of interest.

15 other products in the same category: