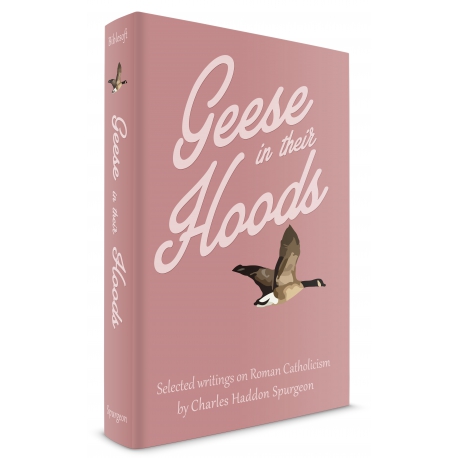 Geese in their Hoods

A collection of Spurgeon's writings on a topic of great importance today. Spurgeon's greatest criticism wasn't of Rome, but of Protestants who wandered after her. Over 30 of Spurgeon's finest essays and tracts, accompanied by the original woodcarvings.

"Essence of lies, and quintessence of blasphemy, as the religion of Rome is..."
...it nevertheless fascinates a certain order of Protestants, of whom we fear it may be truly said that 'they have received a strong delusion to believe a lie, that they may be damned.' Seeing that it is so, it becomes all who would preserve their fellow-immortals from destruction to be plain and earnest in their warnings. Not in a party-spirit, but for truth's sake, our Protestantism must protest perpetually. Dignitaries of the papal confederacy are just now very prominent in benevolent movements, and we may be sure that they have ends to serve other than those which strike the public eye. A priest lives only for his church; he may profess to have other objects, but this is a mere blind. Our ancient enemies have small belief in our common sense if they imagine that we shall ever be able to trust them, after having so often beheld the depths of Jesuitical cunning and duplicity. The sooner we let certain Archbishops and Cardinals know that we are aware of their designs, and will in nothing co-operate with them, the better for us and our country. Of course, we shall be howled at as bigots, but we can afford to smile at that cry, why it comes from the church which invented the Inquisition. 'No peace with Rome' is the motto of reason as well as of religion."