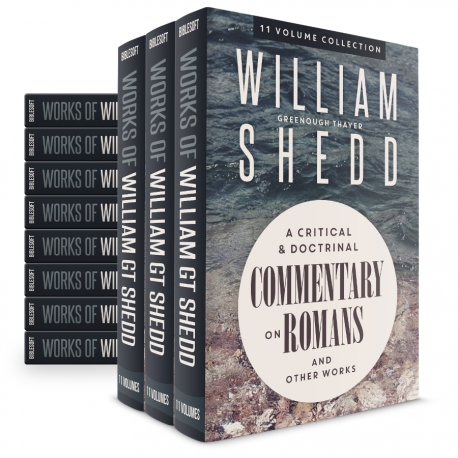 Called a leading Reformed theologian of the 1800s, William G. T. Shedd was a Presbyterian professor of historical theology and systematic theology at Andover Seminary and Union Seminary, respectively. He was also a prolific writer and wrote several books that are still in use today.

This 11-volume collection includes Shedds greatest works such as Dogmatic Theology and Critical and Doctrinal Commentary on Romans. Shedd's use of the Greek language in these works makes this package an exciting addition to your PC Study Bible library.

Dogmatic Theology occasions pure joy for all who are devoted to biblically sound and historically alert theology. Here they will encounter an energetic and well-stocked mind laboring diligently to perceive the truths of Scripture, chart their interrelations, and follow their implications through high and reasoned speculation. Alan Gomes's introduction—itself an inviting invitation to the delights of historical and systematic theology—identifies not only the peculiar strengths of Shedd's work, but also ways it can correct many errors of more recent theology. The English translations of Shedd's many untranslated quotations enhance the work's accessibility, as do the glossaries, which by themselves may instruct readers in theological terminology and biography alike. An eminently useful publication and a significant service to the church.

Included in this collection:

"William G. T. Shedd's Dogmatic Theology is a classic," writes Alan W. Gomes, editor of this new edition. "It is a profound work that sets forth the deepest themes of religion with a grandeur and majesty of expression that has rarely been equaled and that never will be outdated." Gomes considers Dogmatic Theology "one of the finest theological systems ever produced." Shedd's discussion of some topics is, writes Gomes, "unequaled by anything produced by modern evangelicals." Shedd wrote Dogmatic Theology with the prayer that it would help "to strengthen the believer's confidence in [divine] revelation and to incline the unbeliever to exercise faith in it." "Dogmatic Theology can serve as a powerful floodlight to lay bare some of the theological blind spots plaguing today's evangelical church," writes Gomes. "Modern evangelical systems tend to be weaker precisely at those points where Shedd's is most robust." Published originally in 1888-1894, Dogmatic Theology was reprinted twice in the twentieth century, most recently in 1980. Recent assessments of the second edition include the following

Dr. W.G.T. Shedd expounds almost every aspect of preaching, analyzing its nature, outlining the main features which should characterize powerful preaching and describing the approach, plan, actual construction and refinements of a sermon. This volume was used for many years as a standard textbook in several theological seminaries throughout the United States.

The second part of the volume is devoted to the vital subject of Pastoral Theology. Here Shedd is equally thorough and deals with the essential character of a minister, his way of life, his duties, his work of visitation and finally, his work of catechizing his people so as to be informed as to their progress and position in relationship to the preaching. Although much shorter than the first part of the volume, this material is of immense value, and is worth the price of the book.

Sermons to the Natural Man

This 430 page book contains 20 sermons to the unconverted man.

In the words of A.A. Hodge: "Dr. Shedd's 'Sermons to the Natural Man' are, if not absolutely the best, yet of the very best doctrinal and spiritual sermons produced in this generation. We have known much of their power in convincing sinners, and in deepening, widening and exalting the experience of true Christians. Doctrinal preaching, though not in fashion, is the preaching that we need, and the preaching which always best vindicates itself when put to the test of practice. And of all the examples of doctrinal preaching in this generation, the sermons of Dr. Shedd excel in many particulars. He grasps the very heart and soul of the truth. He holds it in its entirety with uncompromising loyalty; he states it with wonderful clearness and accuracy, and illustrates and applies it with singular facility and grace of style."

Sermons to the Spiritual Man

This 420 page volume contains 26 sermons, and in the words of the author: "This volume is complementary to another, published in 1871, under the title of 'Sermons to the Natural Man.' In the earlier volume, the author aimed to address the human conscience. In this, he would speak to the Christian heart. The former supposed original and unpardoned sin, and endeavored to produce the consciousness of it. The latter supposes forgiven and indwelling sin, and would aid in the struggle and victory over it."

"Shedd's insights into prevailing trends and their consequences, so eloquently expressed in this book of essays is deserving of repeated close scrutiny. Sufficient for us to say that his material is biblically orthodox, historically defensible, and as important to us today as when it was first penned more than 100 years ago. Truth is timeless, and while the opinions of other writers may be in vogue for a short period, in the final analysis it is the writers who enrich our lives with theological themes that outlast their more popular contemporaries. It is with delight, therefore, that we welcome the reappearance of W.G.T. Shedd's famous essays." - Cyril Barber

Composed of numerous articles relating "to principles in theology and ethics which are eternal, and vehemently opposed in the standing conflict between orthodoxy and heterodoxy." Shedd notes that in this war "[t]here is nothing new in the orthodoxy of today; and nothing new in the newest heterodoxy. A scholar vested in ancient learning can trace both alike in the antagonisms of the past. Speaking generally, the orthodox respects and cultivates systematic theology; the heterodox contemns and vilifies it. The former maintains the carefully stated creeds of the evangelical denominations; the latter seeks to revise, relax, and nullify them. Orthodoxy defines Christianity to be an exclusive religion, distinct from all others, and intended to convert them; heterodoxy explains it to be a conglomerate of all religions, and destined to be merged and lost in them."

Lectures on the Philosophy of History

First written during the winter of 1853–1854 as an introductory course on ecclesiastical history at Andover Theological Seminary, these four lectures tackle the idea of history, the nature and definition of secular history, and the nature of church history. These lectures lay the theoretical groundwork for Shedd’s 2-volume History of Christian Doctrine—also included in this collection.

Shedd’s volume on Calvinism defines and defends the tenets of Calvinism against the rising influence of modernism and the increased fragmentation in American churches. In particular, Shedd addresses theological controversy in the Presbyterian Church, prompted by a proposed revision from the Westminster Standards. In this volume, he appeals to the history of Calvinism to prevent latitudinarian change in the Presbyterian Church, and justifies the theology of Calvin—and his intellectual and theological predecessor, Augustine—for the present day.

Critical and Doctrinal and Commentary on Romans

First published in 1879, this classic Reformed Commentary has been reprinted again and again through the years. It is an outstanding contribution to the study of the Epistle that has turned the world upside-down.

"When studying Romans, I usually reach for Shedd first. Highly valued in past generations, Shedd's careful treatment of the original text is succinct and yet richly suggestive of profitable lines of exposition. A must have for serious study of Paul's most important letter." Dr. Robert P. Martin, Pastor, Emmanuel Reformed Baptist Church, Seattle, Washington, Editor, Reformed Baptist Theological Review

"Believing that the Epistle to the Romans is 'an inspired system of theology,' Shedd sought to give particular attention to the great doctrines of original sin in chapter 5, indwelling sin in chapters 7 and 8, and election and reprobation in chapters 9, 10 and 11. The merit of Shedd's commentary is found in his fresh examination of the Greek text, combined with an appreciative interaction with the best of sixteenth- and seventeenth-century Reformed exegesis, and his abiding commitment to the traditional Reformed concept that the intended fruit of exegesis is a systematic statement of religious truth." - Rev. Sherman Isbell