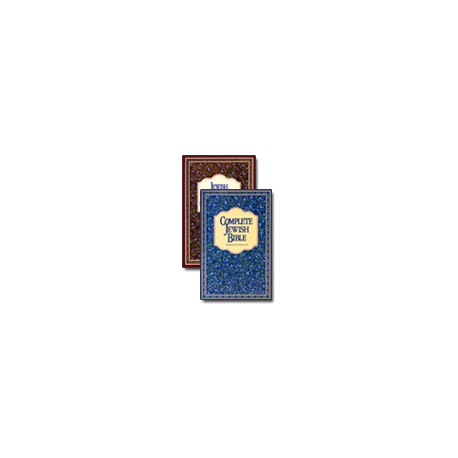 The Complete Jewish Bible is a translation for Jews and non-Jews alike. It connects Jews with the Jewishness of the Messiah, and non-Jews with their Jewish roots. Names and key terms are returned to their original Hebrew and presented in easy-to-understand transliterations, enabling the reader to say them the way Yeshua (Jesus) did! For readers familiar with the Jewish New Testament, the Complete Jewish Bible is a welcome sight! You receive more than 1630 pages worth of the whole Bible as continuous books from Genesis through Revelation.

Features of the Complete Jewish Bible include:

In the Jewish New Testament Commentary, New Testament passages and expressions are explained in their original cultural context, the way first century Jewish writers meant for them to be understood! Over fifteen years of research and study went into the JNTC to make the New Testament more meaningful!

Dr. David Stern offers an exciting and original way of understanding the New Testament from a Jewish point of view.

Features of the Jewish New Testament Commentary include:

He demonstrates that the New Testament upholds Jewish values, such as the oneness of God, the why Israel is God's chosen, the sanctity of the Torah, and the importance of works along with faith. He also shows how the New Testament speaks to modern issues like assimilation, intermarriage, and anti-Semitism. Finally, in terms of the Greek and Hebrew languages, Judaism and first-century culture, he explains controversial “Jewish New Testament” renderings.