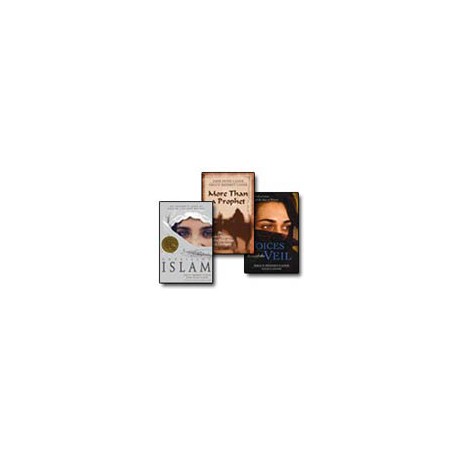 Written by two professors of Theology and Church History, who happen to be brothers and former Muslims. Explains Islamic religion and culture with clarity and precision.

The Caners wrote Unveiling Islam to explain Islam to Christians. Most of the questions and objections considered were raised by Muslim scholars as reasons why they refuse to believe in Jesus Christ as the Son of God and Savior of humanity. Here lies the foundation of Islamic arguments against Christ and the stark points of contrast between the two religions.

After the release of Unveiling Islam , patterns of questions, whether from the secular media or Muslim ulema (scholars) began to develop. More Than a Prophet was born as they studied these patterns of objection and crafted responses to challenges posed by the critics of Christianity in a variety of settings.

The Understanding Islam Collection provides real-time resources for answering questions such as: “I have a Muslim friend. . . . How do I answer my Islamic friend, who says . . . ?”

The collection titles include:

Unveiling Islam:
An Insider's Look at Muslim Life and Beliefs

Islam is often obscured by a veil of unfamiliar beliefs, customs, and practices. Words like Muslim and Jihad defined in conflicting terms. To westerners it is a bewildering system of sects and beliefs that recognizes little or no difference between the rule of religion and that of government entities.

Written by two professors of Theology and Church History, who happen to be brothers and former Muslims. The Caners have organized a wealth of information into a package that people without previous knowledge of Islam will be able to unwrap.

Comprehensive yet concise, this resource explicitly addresses evangelical Christians who share a desire to reach 1.2 billion Muslims with the gospel of Jesus Christ, and answer what is Islam, when you peek behind the veil?

More Than a Prophet:
An Insider's Response to Muslim Beliefs About Jesus and Christianity

Organized in a question-and-answer format, this book is designed to help Christians explain their faith to Muslims. It not only contains the answers to the most common objections, supposed refutations, citations, and arguments, it lovingly but unequivocally presents the key tenets of Christianity and unequivocally answers those who maintain Jesus Christ is at best a good teacher and prophet.

An unprecedented, sympathetic, and systematic exploration of the mysterious world of Islamic women, by women who've been there. More than half a billion women live their entire lives peeking out from behind heavy veils. Theirs is a mysterious, misunderstood life often lived without hope and under great persecution.

This groundbreaking book is written by evangelical Christian women who have seen the other side. Ranging from missionaries in Islamic countries, to former reporters and columnists, the contributors give a powerful and unsilenceable voice to the women behind the veil.

10 other products in the same category: