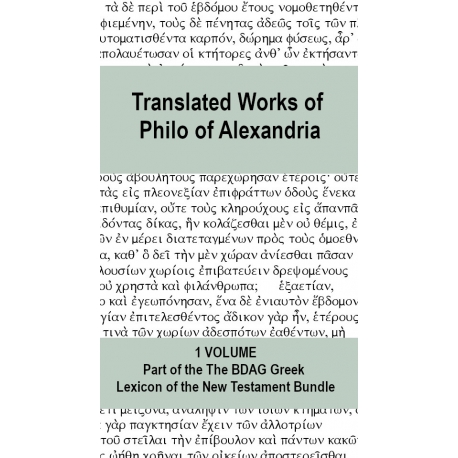 I. [1] "And he also added, that she should bring forth his Brother." (Gen 4:2) The addition of one thing is a taking away of some other; as for instance, of particles in arithmetic, and of reasons in the soul. If then we must say that Abel is added, we must also think that Cain is taken away. But that the unusual character of expression may not cause perplexity to many we will endeavour to explain accurately the philosophy which is apparent beneath them, as clearly as may be in our power. [2] It happens then, that there are two opinions contrary to and at variance with one another; the one of which commits everything to the mind as the leader of all reasoning, or feeling, or moving, or being stationary; and the other, attributing to God all the consequent work of creation as his own. Now the symbol of the former of these is Cain, which name, being interpreted means, "possession," from his appearing to possess all things; and the symbol of the other is Abel; for this name, being interpreted, means "referring to God." [3] Now both these opinions were brought forth by one soul. But it follows of necessity that as soon as they were born they must have been separated; for it was impossible for enemies to dwell together for ever. Until then the soul brought forth the God-loving doctrine Abel, the self-loving Cain dwelt with her. But when she brought forth Abel, or unanimity with God, she abandoned unanimity with that mind which was wise in its own conceit.