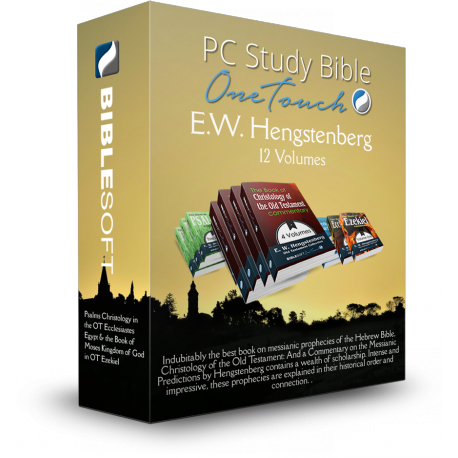 All the major writings on the Scriptures by the famous German scholar and theologian Ernst Wilhelm (E. W.) Hengstenberg (1802-69), featuring his best-known work, the Christology of the Old Testament.

This is Biblesoft's most complete collection of the scholarly writings and commentaries by Ernst Wilhelm (E. W.) Hengstenberg, including nearly all of his published works. In addition to his writings on the Old Testament (see the Hengstenberg Old Testament Collection), we also include his two greatest works on the New Testament:

These are detailed critical and exegetical commentaries which explore both the Greek text and its historical-cultural background. In addition to the Bible references, we have also linked references to the works of Josephus and the Church Fathers, as well as the Pseudepigrapha, as far as possible, wherever they occur. This makes Biblesoft's electronic version among the very best available.

E. W. Hengstenberg is an important figure in the history of modern criticism and Biblical studies, as he took a moderating position against the more extreme skeptical approach found in much of the German scholarship of the period. A devout Lutheran minister and theologian, he labored hard in his writings, as in his post at the university of Berlin, to preserve a true Evangelical spirit in Biblical criticism and theology both, in comparison with the burgeoning Rationalism of his day. This makes his commentaries and other writings continued to be valued greatly by many Evangelicals. They belong in the library of every Biblical scholar and student today, and Biblesoft is pleased to make them available to you!

Note: For OneTouch users who have the Professional Series, be aware that the Commentaries on John and Revelation are already included in that library series.

You will find the Christology of the Old Testament and the commentaries on the Psalms, Ecclesiastes, Ezekiel, John and Revelation all accessible by Bible verse directly under the Commentary menu. All the titles in this collection are also available under "The Works of E. W. Hengstenberg" in the Books menu.

9 other products in the same category: